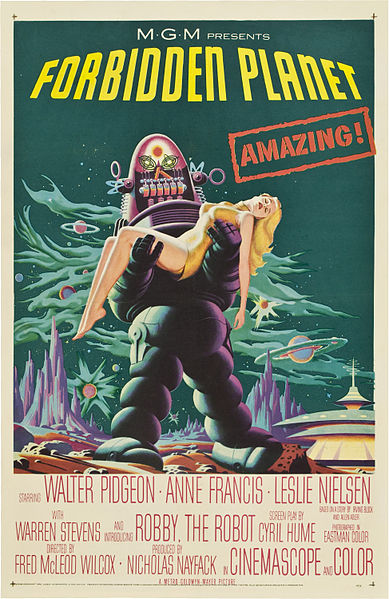 I’d like to begin by setting the record straight. This is the best sci-fi film ever made, and the 1950’s is the best decade ever for the genre, and it’s not up for debate. OK, now that we’ve got that out of the way, let’s get down to dissecting –Forbidden Planet! The actors and cool science fiction elements really jettison this film into the atmosphere! Walter Pidgeon and Leslie Nielsen are incredible, and the lovely Anne Francis really ignites the picture when she steps into the light!

In 1956, this film wasn’t a media darling, but it did make money. It wasn’t until later, when it was re-released in 1972, that it started to gain momentum, and eventually become a cult classic! DVD sales have been fantastic, and it will forever occupy space on my DVR! For those of you who haven’t seen this flick yet, stop reading this, and get out there and buy it before continuing! Now, let us journey to the 23rd Century…

The film opens with a space cruiser (United Planets C57-D), as it heads out into the far reaches of space. Once the ship nears it’s destination, it releases the explorers from “hyper-sleep”. They make contact with the planet below (Altair IV), and Dr. Morbius (Walter Pidgeon) tells them that everything is OK. Commander Adams (Leslie Nielsen), informs him that even though everything is fine, they must land and do an inspection. Morbius warns the commander that he won’t be held responsible for anything that happens from here on out. Commander Adams tells him to supply them with landing coordinates, so they can safely land the ship.

Once they land, Commander Adams, Lt. Jerry Farman (Jack Kelly), and Doc Ostrow (Warren Stevens), are greeted by a transport vehicle that appears to be going at an alarming rate of speed towards them. They soon realize that it’s a robot (Robby the Robot-pic below with Walter Pidgeoon), and he was sent by Dr. Morbius to bring them to his home. Once there, Morbius assures them that everything is fine, but when they ask about the other colonists, Morbius pauses, then tells them a fantastic tale. He recounts how the other colonists were killed by some unforeseen planetary force, and as the last few tried to take off in the ship to go back to Earth, the ship was vaporized. He cannot explain how or why this happened, only that he and his wife were spared, and they shared a love for this strange new world. 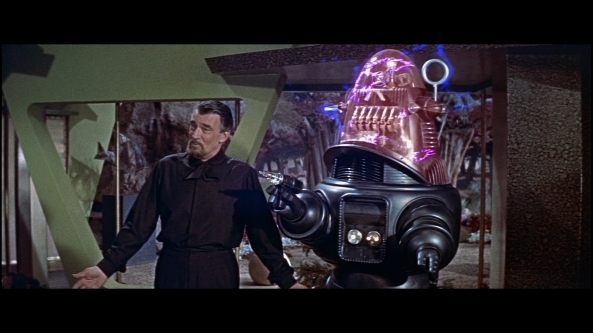 As they’re finishing up lunch, a beautiful woman appears, and Morbius then introduces his daughter (Anne Francis). Lt. Farman immediately tries to put the moves o her, but she’s too immature to figure it out. Morbius thinks everything is OK, but Commander Adams must contact Earth for further instructions because the other colonists being dead wasn’t in the plans. Morbius isn’t happy about that, but can’t do anything about it either.

The men return to the ship for the night, and as they slumber, some unknown entity enters the ship, and destroys their communication device. Commander Adams questions the guards the following morning, but they don’t give any insight about what happened. Doc Ostrow and Commander Adams question Morbius about it, and he reveals to them that he’s been studying an ancient civilization known as the “Krell”, that once occupied the planet, but were wiped out by some mysterious means. He also shows them some of the devices that they invented, one of those being an education device of some kind that can exponentially increase ones mental acumen (pic below). This is how he was intelligent enough to create “Robby”, and some of the advanced equipment around the house.

The men convince Morbius to lend a hand in constructing a new communication device,and Robby lends a hand as well. The following night brings even more chaos, as Commander Adams orders extra security, but the Chief Engineer is killed. A footprint is left this time though, and the Doc makes a cast of it to try to gauge what they’re dealing with. The cast is tremendous, and goes against any and all scientific knowledge. While all of this is going down, Commander Adams and Morbius’ daughter, Alta, are falling in love. We then see a scene, where this giant invisible beast (pic below) attacks the camp of the explorers, and simultaneously Morbius is having a violent nightmare. Alta wakes him up, and the beast mysteriously disappears. Commander Adams and the Doc realize that one of them must use the alien educator to heighten their  mental power, and find a way to get off of the planet unharmed. They return to the home of Morbius to do that, but are stopped by Robby. Alta uses an override command to stop Robby, and Commander Adams and Alta talk about leaving the planet. While they talk, Doc goes into the lab, and takes the “brain boost”. Later, he stumbles out of the lab, and dies in Commander Adams arms. Just before he does, he reveals the secret of what killed the aliens and the colonists! 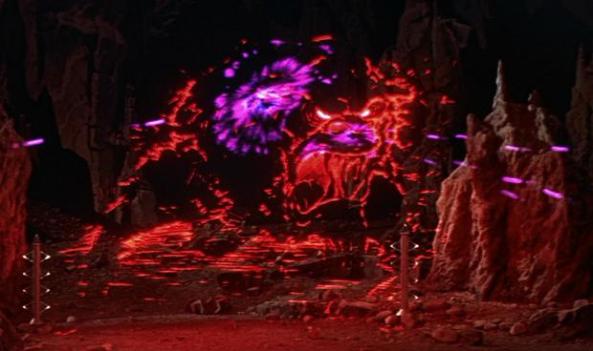 Will Commander Adams and his fellow explorers escape alive? Or will they succumb to the same planetary force that kills everything in its path? Find out, when you watch…Forbidden Planet!!!

This is the best sci-fi movie ever, no question. Yeah, it does have a couple of loopholes in it, but again, this was made in 1956! Think about it, that’s almost 60 years ago! The acting was quite good by all the people involved, but Leslie Nielsen and Walter Pidgeon deserve the lion share of the credit. All the others were solid too though, and even the “eye candy”, Anne Francis was more than serviceable.  Heck, even Robby the Robot added some dialog! Not only that, but I’m sure back in the day, Robby was an astounding achievement on the big screen too!

The electronic music score was quite a change from any other movies of that generation. The set designs were absolutely astounding as well, but they were the most incredible during the special effects scene with the monster attacking through the force field. This classic film is a must watch for anyone that even has a mild interest in sci-fi or just classic cinema of yesteryear! Kudos to the men and women that brought us Forbidden Planet!