As it’s my blessing and curse, I can’t stay away from Peter Cushing and Christopher Lee for very long! In this film, both men are on-screen a lot, and really get to play off of each other quite a bit. As it was nearing the mid-1970’s, Cushing was slowly starting to wind down the torrid pace of movie making he’d been at for the last couple of decades. Lee, however, was still going strong and still is to this day! This film was produced by a small company (World Film Services, started by John Heyman), but had bankable stars with Cushing and Lee. This one isn’t as well-known as most that these two gentlemen have been in, but we’re going to take a look at it right now! 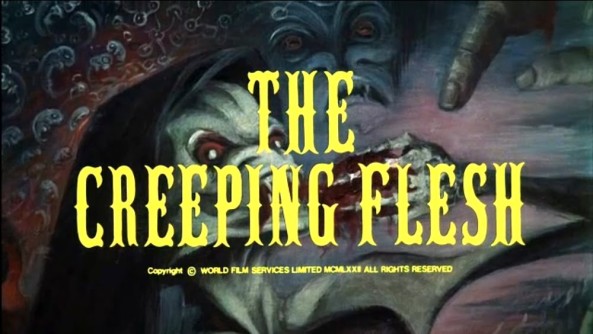 The film begins with a man painting  picture of a horrific looking creature (Lovecraft inspired?), and some other very odd things. A knock at the door startles the elderly gentleman that is painting, and a young man walks in, and the old man tells him that he needs him to listen to what he has to say, because no one else will. Professor Emmanuel Hildern (Peter Cushing) begins to tell the young doctor a story about a time, three years ago, when he had just returned from New Guinea (flashback to three years earlier)…

At a sprawling estate, Professor Hildern returns to his home, and with the skeleton of a Neanderthal-type man. He’s greeted at the front door by his daughter, Penelope (Lorna Heilbron), and a colleague, Professor Waterlow (George Benson). Two men, one of them named Carter (Michael Ripper), then bring in a large box, and in it, is the skeleton. The two men pry it open, and Waterlow is stunned by the behemoth. Penelope was hoping to have breakfast with her father, but the excitement of the skeleton has him only thinking of its possibilities. She’s quite disappointed by this development. He eventually relents from his work, and joins her. She tells her father that she had to dismiss the help because they can’t afford them anymore. He assures her that things are going to change very soon because of this new discovery. 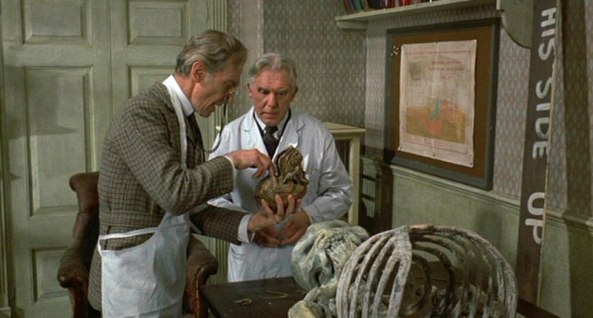 Penelope believes that her mother died a while back, but in reality, she was committed to an insane asylum, run by her uncle, and Professor Hildern’s brother, Dr. James Hildern (Christopher Lee). Professor Hildern receives a letter that his wife died in the asylum, so he departs to see what happened. James tells his brother that she died while he was away, and that he’ll apparently be stopping the financial help he was giving him to help his research. It’s quite an awkward moment, and Emmanuel leaves feeling unsettled, and almost betrayed.

Back at the house, Emmanuel reprimands Penelope for going into her mother’s room. He’s apparently forbade her from even mentioning her name, as well. He then retreats to his laboratory, and inspects the skeleton further. He gets some water and begins to clean the skeleton, but within seconds finds out that the skeleton reacts to water in such a way that’s astounding. Wherever water touches the skeleton, flesh begins to appear. One finger completely regenerates, and Professor Hildern quickly cuts it off. Over at the asylum, Dr. Hildern and his associates are conducting Frankenstein-like experiments on the patients, and we see what true horror is. One of the patients jumps him, and grabs the keys, but the good doctor pulls out a pistol and shoots him dead. One of the patients actually manages to escape, and now the police are helping with the search. 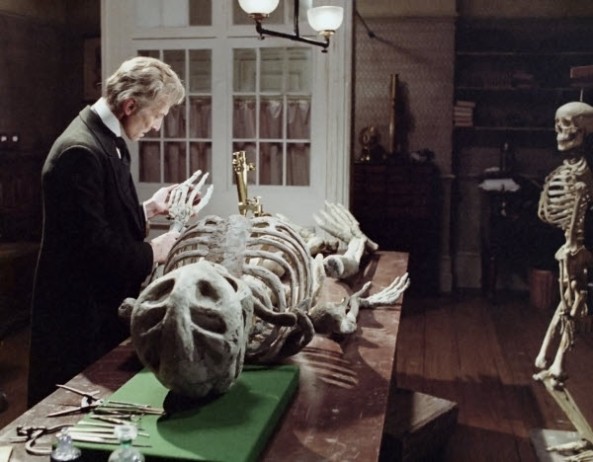 Professor Hildern begins to read up on the folklore of the native people of New Guinea, and then understands that this skeleton is the personification of evil, and the water will restore it to life. Waterlow is befuddled by all of this, and Hildern begins to talk of playing God, and wiping evil off the face of the Earth. He then looks at the blood from the finger he cut off of the skeleton under a microscope, and then compares it to his own. Next, he mixes the two together and discovers that he could stop “evil” from spreading by an inoculation. Meanwhile, Penelope has stolen her fathers keys, and heads into her mother’s bedroom (a place she’s been strictly forbidden to enter). She rummages through her mother’s things for a while, but then discovers a newspaper article that tells of her mother’s mental illness.

Back in the lab, the two doctors are experimenting on monkey with the blood of the skeleton. It’s getting late, so the two men pack it in for the night. The blood under the microscope however is yielding results contradictory to what Professor Hildern originally saw when he tested it. He then heads upstairs and sees that someone is in his wife’s room. He freaks out about it, and then he and Penelope get into an argument. He begins to have a flashback of when his wife was still alive and was a “dancer” that went insane (drugs, alcohol?).

The next morning, Professor Hildern decides to use his new serum on his daughter, suspecting that her mother’s mental disorder may be hereditary. We then check in on the escaped patient from the insane asylum, as he’s wandered into a local pub. He thrashes most of the male customers, and then makes his way out. The next day, Waterlow calls to Hildern and both men see that the serum has driven the monkey mad. Hildern runs upstairs to see Penelope, but she’s already gone. We see her, as she travels through the seedy parts of London, but so is the escaped patient. Hildern is making his way there as well, but it’s like trying to find a needle in a haystack. A young man sees Penelope at the bar and starts buying her drinks. Eventually, they go upstairs, but Penelope wont put out. The guy tries to force himself on her, but finds out how sharp her claws are after she rips part of his face off!

She then heads downstairs, and begins to dance around for the crowd. One sailor gets so aroused that he grabs her and tries some shenanigans. She grabs a bottle, breaks off the top, and slashes the guy’s throat!  They chase her out of the pub, and through the streets. She goes into a warehouse and bars the door. As the police and crowd are trying to break the door down, Penelope runs into the escaped patient, Lenny. As the police search the place, Lenny tries to help her escape. They go to the top of the building, but there’s no escape. Lenny looks over the edge and the people below see him. Penelope goes completely off her rocker, and grabs a two by four, and cracks Lenny over the head, and it sends him plummeting to the ground, and his death. A few seconds later, the police surround and capture Penelope.

Of course, she’s labeled insane, and taken to her uncle’s asylum. He sees a sample of her blood, and sees the foreign agent that as introduced by her father. Uncle James realizes he has his brother cornered, and once he sees the skeleton, he strong-arms his brother into an alliance. Emmanuel doesn’t want to do it, but he may have no choice.

Can Emmanuel somehow redeem himself in the eyes of his maker? Or will James be able to force him into the world of evil? Oh yes, and what about the monster?

For a horror film, this one is more suspense than anything, well, until the end that is. Cushing and Lee are their normal selves, in that you get what you expect. Cushing is torn between morality and his love of science. Lee is a straight up villain in this one, and it was cool to see him in that role and not wearing makeup or a costume that hid his menacing faces. The supporting cast didn’t offer much, but Lorna Heilbron did give some good moments before and after her insanity took hold. A quick appearance of Hammer Studios stalwart, Michael Ripper, was comforting, and even another familiar face from that company, Duncan Lamont (Evil of Frankenstein- 1964 and Frankenstein Created Woman– 1967).

One thing of note that I must mention, was that of the musical score. Paul Ferris did an outstanding job with the music for this film, and he had to be mentioned! The makeup was headed up by none other than Mr. Roy Ashton, and anyone that knows their Hammer films, knows that name! The sets were also very good, and it should be noted that this film wasn’t financed by one of the big studios of the day, but by one that was very tiny.

Give this one a watch, if for no other reason than it was one of the last films that Cushing and Lee did together, and it holds up quite well in my estimation!