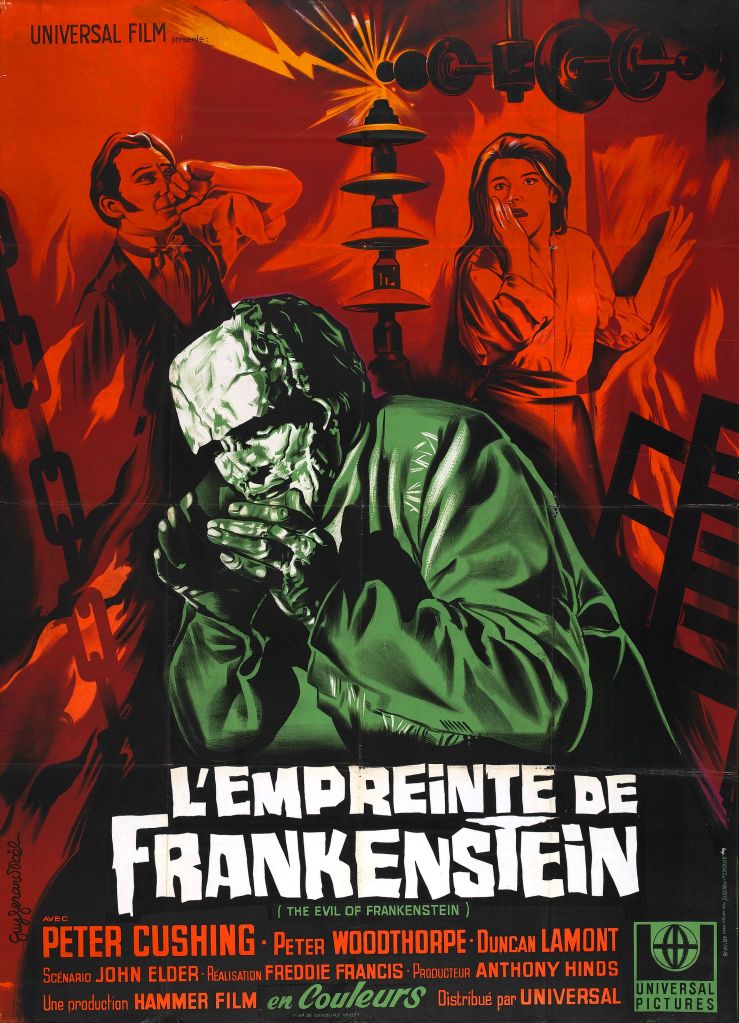 Title: The Evil of Frankenstein

I just recently realized that I hadn’t reviewed this film yet, and this must be rectified! Falling third in the sequence of “Frankenstein” films (after The Curse of Frankenstein – 1957, and The Revenge of Frankenstein – 1958, but before Frankenstein Created Woman – 1967), this film picks up and seems to generally follow canon up to this point (other than how the creature was stopped at the end of the first film and the fate of the Baron), so that is encouraging. The masterful Peter Cushing reprises his role as “Baron Frankenstein” and as usual, owns it! Without going into too much, this selection from the franchise is one I find quite comical, some situations that were meant to be, and others not. Alright, let us sojourn into the past! 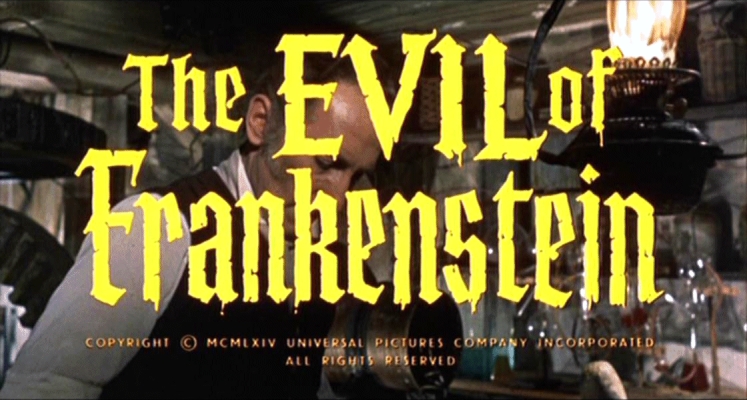 The film begins with a funeral, and the corpse of a villager lying in wait, ready to be buried. We then see some unscrupulous character snatch the body! A girl witnesses this, and runs off into the woods. Before she knows what’s going on, she runs right into none other than Baron Frankenstein (Peter Cushing)! The home of the recently stolen corpse is visited by the local vicar, and he’s appalled by this act of terror. Meanwhile, the drunken fellow that stole the corpse takes it to a secluded home in the nearby area. He sells it to Baron Frankenstein and his assistant, Hans (Sandor Elès), and heads to the pub to spend his earnings. While there, he’s confronted by the vicar who has an idea where the corpse may have been taken (the little girl identifies the drunk). He shows up at the laboratory and begins to chastise the good Baron and his assistant, then smashes their equipment. The Baron lunges at him, and starts to throttle the vicar. Hans pulls him off, and they hightail it out of town. 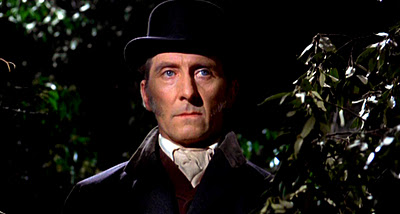 The scene shifts to the carriage, where both men are heading for a new locale. The Baron wakes up Hans, who’s been napping. He informs him that they’re heading to Karlstaad, and the Baron’s former residence. Hans is apprehensive about it, thinking that the Baron will be identified, and they’ll be imprisoned. Baron Frankenstein tells Hans that they’ll take some things of value from his castle, then sell them for money to start another lab elsewhere. As they near the town, they realize there’s a festival going on, and that they can work without anyone noticing them. They reach the castle, but find that it has been pillaged by unknown persons. Hans then asks the Baron about the origins of the monster, and the Baron recounts that very night. 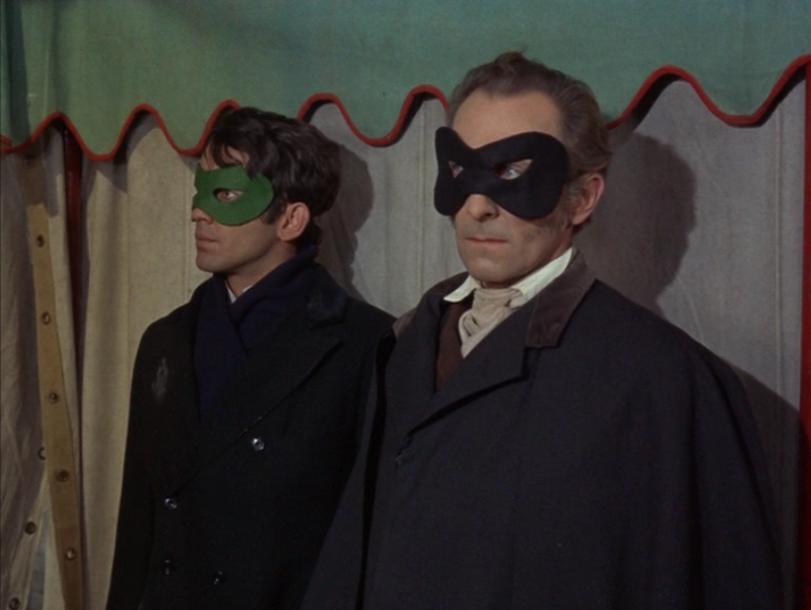 The following day, the two head into town for some food. Hans is still scared of being recognized, so the Baron buys two masks for them to wear. Once inside a cafe’, the Baron sees his old nemesis the Burgomaster (David Hutcheson), and the Chief of Police (Duncan Lamont). He gets extremely agitated when he notices a ring that the Burgomaster is wearing that was his own before he was run out of town. The police confront him about the disturbance, but he and Hans flee for their lives through the carnival. They end up in the tent of a hypnotist named Zoltan (Peter Woodthorpe). He’s performing some rather impressive feats of the mind, and then asks for two volunteers for his next act. The Baron and Hans step up on the stage, but then the police arrive, and begin to search the crowd. The Baron and Hans slip out through a back door, but Zoltan interferes and gets arrested. 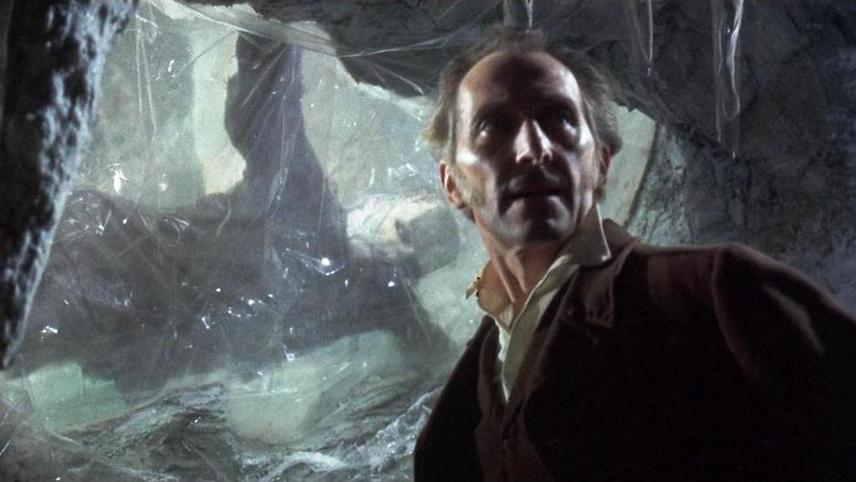 As the two fugitives are trying to keep a low profile, the Baron can’t help himself from confronting the Burgomaster. The two get into a verbal spat, but then the police show up. The Baron locks himself into the bedroom with the buxom young lady that the Burgomaster was “entertaining” for the evening, then uses the bed sheets to make a rope to get away. He and Hans then make their way to the mountains to escape the police. It is here that they meet up with a deaf/mute woman named Rena (Katy Wild). She shows them to a cave for shelter, and it is here, that they make a great discovery. Apparently, the monster (Kiwi Kingston) was thought to have been killed, but ended up frozen in ice. They thaw him out and take him back to the castle for some “work.” 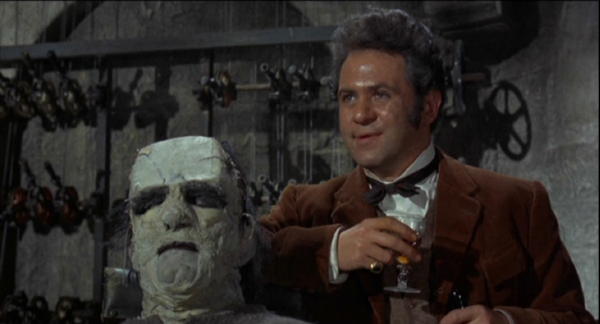 After what seems to be days or weeks, they can’t revive his mind, only the body. The Baron remembers the fantastic feats that the hypnotist performed, and thinks he can possibly awaken the sleeping giant’s mind. He does just that, but there’s one little wrinkle…the monster will only obey him! This annoys the Baron, and really ticks off Hans, but for now, there’s nothing they can do about it, so they offer asylum to Zoltan, in exchange for his helping along the mental status of the monster. The Baron believes that Zoltan is helping the monster learn, but in reality, he’s just playing along during the day, but using the monster for more insidious reasons at night!

Will this monster be able to overturn the murderous impulses that surge through his body? Or will Zoltan push him too far, and put everyone in danger of the evil of Frankenstein! 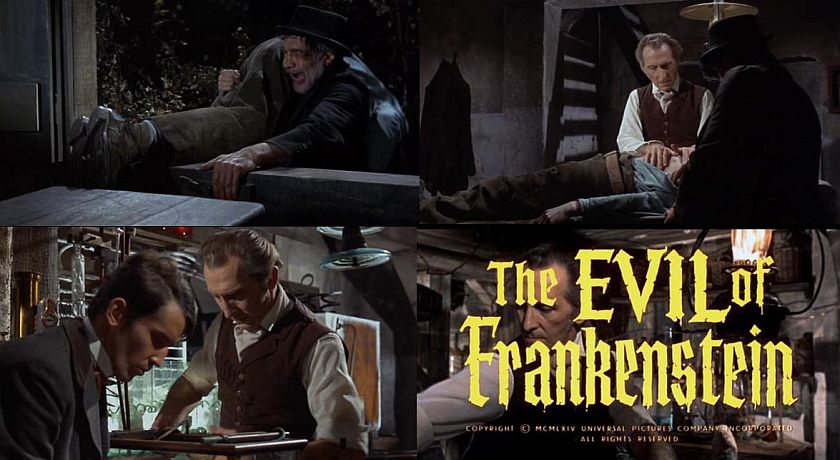 If you overlook the slight discrepancies from the first film and the flashback in this one, you can have a blast with this film. The two “Peters” (Cushing and Woodthorpe) in this film are great, and play against each other quite well. It’s not the only film these two gentleman appear in together (also The Skull, 1965), but it’s definitely the film with the most screen time between them.

A couple of the scenes were rather dark, and made it slightly difficult to see what was going on. The sets were great, especially the castle, and the few minutes in the cave where the monster was initially found. Some good moments with the music to add some tension to a few scenes, and Don Banks is the man behind that. Finally, for the third consecutive film, we had a different actor portray the monster. This time, we had Kiwi Kingston, and he fit this part perfectly. A big man who really knew how to be imposing, for sure!