Title: IT! The Terror from Beyond Space

Tell me if you’ve seen this one before…an alien snakes aboard a ship, and using guile and subterfuge (and the duct work), eliminates the crew of the ship one by one. If you guessed the 1979 classic, Alien, you’d be wrong. Sounds a lot like the screenwriters for that movie “borrowed” some key plot points from this film, doesn’t it. Not that it hasn’t been done many times over, just pointing it out for those that might not have seen this film or know about the similarities.

This film has the “space” theme like many others of the 1950’s, but it does separate it self from most of them because of a few key elements that I’ll talk about in my thoughts later after the synopsis. Well, sit back, relax, and get ready for a rocket ship ride to Mars! Let’s get to the film!

The flick begins with a monologue from the captain of a rocket ship that crashed on Mars, in 1973. He tells that another ship arrived to help eventually, but that the other crew members are all dead. Col. Edward Carruthers (Marshall Thompson) tells us that the other rocket ship will take him back to Earth, and try him for the murders of his fellow astronauts. We next switch back to Earth, and a press conference being held, telling reporters of the situation. They all immediately run to the telephones to inform their editors of the blockbuster story. Carruthers then tells the viewers that the ship is readying for take off, and that the four-month long trip will be interesting. 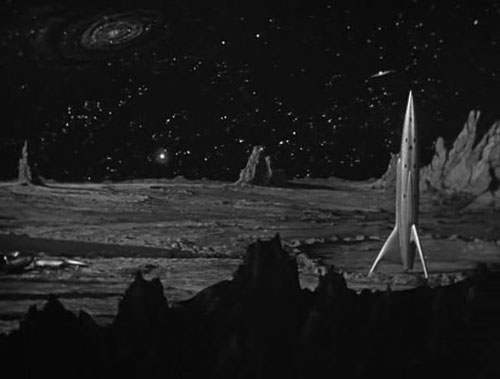 Next, we see the Colonel Van Heusen (Kim Spalding)  asking his crew if everything is ready for departure. his crew all relay their information, and then he notices that someone left one of the hatches open. The one responsible speaks up, and then they close it promptly. There’s only one problem. We see that a shadowy figure has sneaked aboard, and looks really ticked off. After they’re in the atmosphere, Van Heusen approaches Carruthers while he’s deep in thought. He asks Carruthers if he’s thinking about the nine bodies he left down there no the planet. He responds that he was, and then Van Heusen begins to interrogate Carruthers, but he sticks to his story that an alien killed his crew. Van Heusen presses him for answers and even reveals that they found the skull of one of is crew members with a bullet hole in it, and then he tells Carruthers that only one kind of monster uses a gun.

In the next scene, the crew is having dinner, and making small talk. Carruthers, who’s being escorted around today by Lt. James Calder (Paul Langton), walks in, and the crew goes silent. One of the crew members, Eric Royce (Dabbs Greer), remarks that he doesn’t necessarily think that Carruthers is lying, but that he’s convinced himself that an alien did it, so he wouldn’t go insane. Carruthers interjects and tells them that he’s obviously not insane, and then he leaves the room. Van Heusen tells Royce that he’ll get a full confession out of him by the time they reach Earth.

That evening, Carruthers is still being watched by Lt. Calder, but then Mary Royce (Ann Doran – Eric’s sister?) walks in and offers him some food. She says that she wants to believe him but that the only version of the story she’s heard is from Van Heusen. Carruthers then tells her about the day the crew began to be murdered, one by one. The crew had set out on a fact-finding mission, but a sandstorm arose, and they headed back towards the ship. One of the crew was snatched out of the jeep like a baby by some unseen beast. They all began firing in different directions (this is when it hits Carruthers that the skull with the bullet hole in it was obviously caused during this event). One by one, the crew gets annihilated, except for Carruthers, who made it back to the rocket ship. Van Heusen then walks in and gets rude with Carruthers, who then walks away. Mary chastises him for acting that way to a fellow officer, and we see that the Van Heusen and Mary are a couple. Van Heusen agrees to stop hassling Carruthers at the behest of Mary.

Later, Carruthers and Eric Royce are having a chess match. One deck below, Joe Kienholz (Thom Carney), is on duty, and hears something below decks. He investigates, and as he’s searching below, he’s savagely murdered by the creature. Carruthers hears him scream, but no one else does. Carruthers investigates, and soon, the rest of the crew is wondering where Kienholz is on the ship. They begin to search, and the next victim is Gino Finelli (Richard Hervey). As he’s smoking a cigarette, the creature attacks him. The others, especially his brother, Bob (Richard Benedict), are getting apprehensive. They discover Klienholz’s body, as it was stuffed in the duct-work. Van Heusen calls for all hands on deck, and everyone comes to help investigate. They realize that someone has to go up in there to search for Gino, so Major John Purdue (Robert Bice) goes in, because he knows the layout best. Within minutes, he finds Gino, who’s on the brink of death. Seconds later, he’s attacked by the creature, but manages to get off a few rounds, and escape death.

The crew now realizes that Carruthers wasn’t blowing smoke, so they formulate a plan to attach grenades to all the openings for the duct work, so when the creatures attempts to open one, it will blow him to kingdom come. They wait and the ladies, Ann Anderson (Shirley Smith) and Mary attend to Major Purdue’s injuries. They also look at the body of the fist victim, and remark that every bone in his body is broken, but that isn’t what killed him. What’s left of the crew tries to theorize what this creature is, and why it’s on a murderous rampage.

One by one, the crew begins to disappear and it seems that none of their conventional weapons can even remotely stop this creature. When the rocket ship arrives on Earth, will anyone still be alive to warn the others? Watch this classic to find out!

When you watch this film, and see all the elements that are in more modern-day sci-fi flicks, you’ll be blown away. I mentioned Alien (1979), because that one has the biggest thank you to give to this film, but there are others that followed this template as well. Of course, this film also some elements that probably stem from films like Forbidden Planet (1956), which were big hits just a couple of years earlier. The cast did a great job at portraying ultimate fear, and the monster, for its time, was outstanding!

The musical arrangements were also good, and really helped set the tone for the more ominous scenes. The special effects were on par with those of the age in cinema, which is to say that they were decent, but didn’t blow you away. Honestly, Marshall Thompson and Dabbs Greer seemed to really be the most convincing, and really have you believing that the film takes place in space. Put this one on your bucket list if you haven’t already seen this one, because you’ll definitely be glad you did after viewing this classic!