Taking a break from the Boris Karloff addiction, and roaming across the seas for a look at one of my favorite scream queens of all time, Barbara Steele! A while ago I reviewed Black Sunday, another film starring Miss Steele, and that one was a product of the late, great Mario Bava. This film didn’t have his legendary vision, but I’ll bet it will surprise you! Alright, let’s get down to business!

The film starts with a mad scientist guy experimenting on frogs. A beautiful woman approaches, and we find out then that Stephen Arrowsmith (Paul Muller) is on the precipice of a break through. His wife, Muriel (Barbara Steele), taunts him, as he’s about to leave on a trip to a science conference. The maid interrupts their little spat, and then later, Stephen leaves in a carriage. Before he leaves, he leaves instructions with the gardener, David (Rik Battaglia), that he needs to take care of a few things while he’s gone. 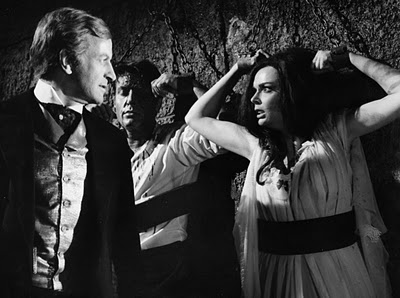 After he leaves, David comes into the house and at this time we find out that he and Muriel have had an affair. As they run to the greenhouse to make whoopie, they’re both seen by the maid, and she has a sinister look on her face. The two begin making out in the greenhouse, but before things can get to crazy, they’re surprised by Stephen. Apparently he knew something was up and faked his departure earlier. He smashes the gardener over the head with a poker, then the next time we see the trio, Stephen has the two adulterers chained up in the basement, and is whipping the beejeesus out of them. 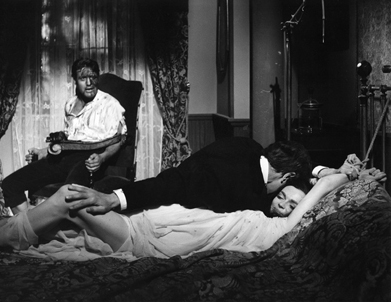 As the torture is continuing, Muriel tells him that she knew that he was a beast, so she tore up the old will she had made that bequeathed everything to him, and made a new one that leaves every penny to her sister (who’s apparently mentally unstable).  Stephen then tries to get Muriel to tell him where the will is, and that if she does, he’ll not kill her and things can go back to normal. She refuses of course, and then we see him and the maid, Solange (Helga Liné), trying to formulate a plan. They resolve that they’ll kill the two in the basement, and then set their sights on the sister. 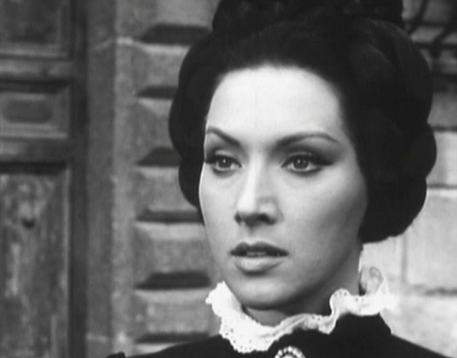 He concocts a plan, and then executes it. He ties Muriel to the bed, then drops some acid on her! He then releases her boyfriend, who lunges to her side. At that moment, he electrocutes the two of them! Time passes, and we see Stephen continuing his experiments. He uses the blood from his dead wife and her lover to reverse the aging process on the maid, Solange (who’s now beautiful, and not old and decrepit).

The scene changes again (some time passes I believe), and the carriage approaches the home. We now see Solange, as she comes outside to greet Muriel’s sister, Jenny (Steele again, but now blond, instead of her trademarked jet-black hair). Solange is startled at the uncanny resemblance of the girl, but also the fact that Stephen is with her, and announces that the two were married just this morning. The two then set out to drive Jenny insane, and then they’ll have the family fortune all to themselves. Stephen and Solange think they have Jenny trapped like a fly in the web of a spider…but what they don’t realize is that sometimes the spider becomes the fly, and can become the victim as well! 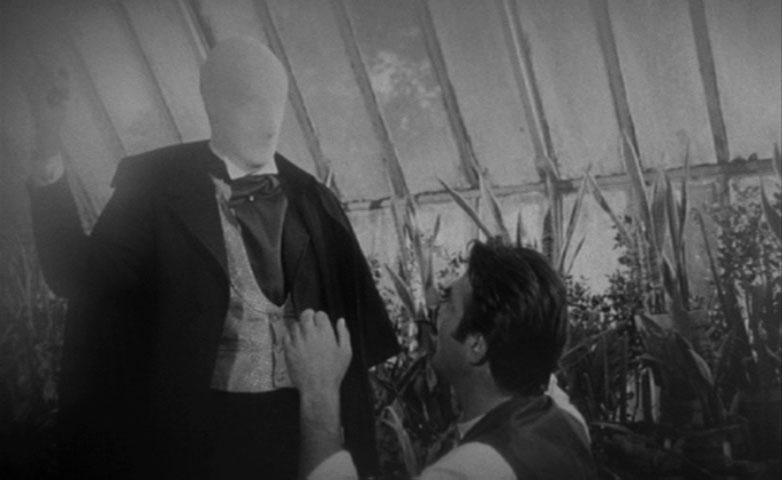 This film is one that fits into the category of being better than it gets credit for. Of course you’ll have those that will say it’s cheesy, or cheap, or that it lacks quality in certain areas. While that may be true at times, you cannot deny the foundation of the film, which is the actors. Barbara Steele does a great job in her dual role (actually triple role, but I’ll let you figure that one out for yourself). She really has a knack for playing someone who is truly sinister. Between this film and Black Sunday, she should be mentioned in the same breath as the other female horror greats that have graced the screen.

The film is also slightly esoteric, but this is part of its charm (and all movies of this type). Some get put-off by dubbing, but this film does a decent job compared to some atrocities that are out there. The home where the film largely takes place, is atmospheric enough to lend some weight to help things along. A mediocre sound track also helps in a couple of spots as well. The two leading ladies are nothing short of gorgeous (images below), and that is something this era is spectacularly known for, and is expected by fans. Murder, betrayal, possession, ghosts, torture, you name it, you get it all in this must see film for any Barbara Steele fan!

Click here for the trailer (even though I believe the film is public domain)! 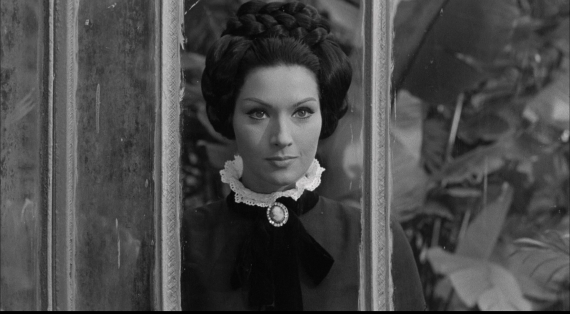 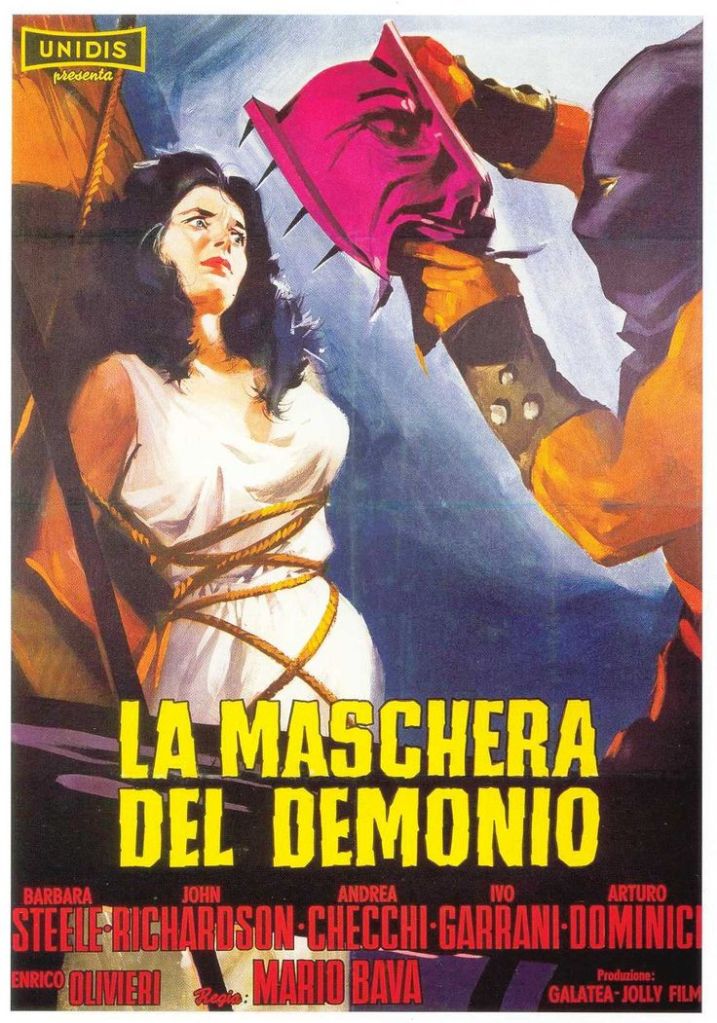 Title: Black Sunday (A.K.A. The Mask of Satan)

I always try my best to keep my promises, so here we go with another film by the great, Mario Bava! After reviewing Planet of the Vampires a few weeks ago, I slowly began searching through his catalog for more films that I knew would be gems. It didn’t take long for me to settle on this one. This being Bava’s first credited film as director (he had apparently done a couple of others uncredited), and the film that put Barbara Steele on the map (she’d done a couple of films, but small roles before this)!

The film caused quite a stir when it was released in 1960, as it was a bit over-the-top for the times. Bava took chances, and really amped up the shock value in this film. The opening scene is one of legend, and really sets the tone for the entire film. Now, let us traverse back in time to the year 1630…

The film opens with a duo, Asa Vajda (Barbara Steele) and Javuto (Arturo Dominici), being put to death for witchcraft. The man leading the charge is Asa’s own brother! He puts his feelings aside and condemns the two to die for their crimes. The first thing he does is brand them with an “S” so that they are marked as Satan’s worshipers.  One of his minions places a mask with metal spikes on the inside over Asa’s face, while another man (wearing an executioners hood) uses a large hammer to pound in into her face! Just before this though, Asa puts a curse o her brother, and all that will follow in his bloodline. She is then burned at the stake, as a violent storm rages on. However, the storm puts out the flames before their bodies are burned.

Fast-forward two centuries, and we see a carriage heading through the same woods where the  two were executed back in 1630. The two men inside, Dr. Thomas Kruvajan (Andrea Checchi), and Dr. Andre Gorobec (John Richardson), are on their way to a medical conference. The carriage breaks down, and the two doctors explore the area because they hear a strange sound emanating from an old cathedral. They find a tomb, and Kruvajan tells Gorobec that it is the tomb of the witch. Suddenly, the coachman asks for help repairing the carriage, so Gorobec leaves to help while Kruvajan continues searching the cathedral (a family crypt, actually). Kruvajan is attacked by a huge bat, but manages to kill the beast with his pistol.

As the men are leaving, they are approached by a strange young woman who asks what they are doing there. Princess Katia (Barbara Steele), and Gorobec have an enchanted moment, then the good doctors leave, as the carriage is fixed. While Kruvajan was fighting the bat though, he was cut on some glass, and his blood seeped into the tomb of the witch. We see it seems to have an effect on her that might resuscitate her. Over at the castle of the Prince Vajda (Ivo Garrani), he and his two children, Katia, and her brother, Constantine (Enrico Olivieri), are on edge on this very eerie night. The Prince is staring at a painting of Asa (their ancestor), and then believes it moves! The servant, Ivan (Tino Bianchi), is then told about the curse of Asa. Ivan tells him to cling to the cross, as it will protect him against evil. 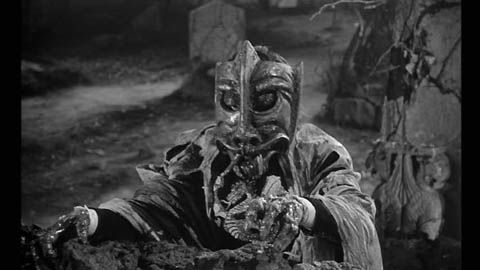 As the evening wears on, we see the body of Asa, as it begins to transform from the blood of Kruvajan. She then telepathically summons her former accomplice, Javuto, and sends him on a mission to attack Prince Vajda. Javuto rises from the grave, and does indeed come upon the Prince in the castle, but Vajda has enough wherewithal to grab his crucifix, and it frightens off the ghoul. The conflict leaves him mentally unstable though, and very vulnerable. They send a servant to get Dr. Kruvajan, but he’s intercepted by Javuto. Javuto then tricks Kruvajan into thinking he’s the servant, and takes him instead to the crypt, where he’s bitten by Asa!

Now that Asa has a servant to carry out her devious deeds, things get very interesting. She also has plans for Princess Katia, as well. She believes that her blood will revitalize her completely, and then she’ll make everyone pay!

Can Gorbec and a few others stop Asa and Javuto before they can turn all the villagers into their slaves? Tune in to find out! 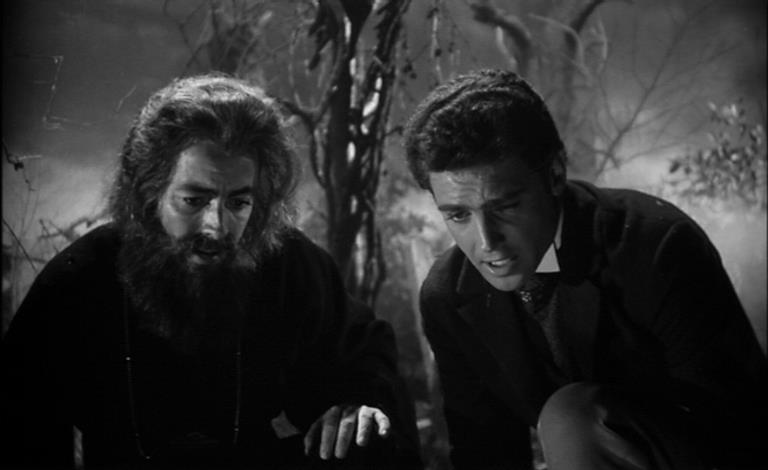 I’ve been aware of this film for quite some time now, but put off viewing it for some unknown reason. Now that I’ve seen it a few times, I really love it, and anyone that’s a fan of horror films from this era will as well. The only thing that was off was the voices that were dubbed. It bothered me for the first few minutes, but wore off after that time. The film (for its day) has a couple of violent scenes that moviegoers must have shrieked at. Bava really sets a creepy tone from the on-set of this film, both visually and mentally. For his first directorial credited film, it’s no wonder why studios were willing to give him some money to make films.

The musical score was very good too, and although the name Roberto Nicolosi is unfamiliar to me, he did a great job. Bava is also credited as the cinematographer, which makes perfect sense knowing his reputation for wanting to be in total control over that aspect of his films. And let’s be honest, it was probably for the best because he quite good at it. Barbara Steele is nothing short of gorgeous in this film, and you will want to see more of her films after you’ve seen this one, I guarantee it! 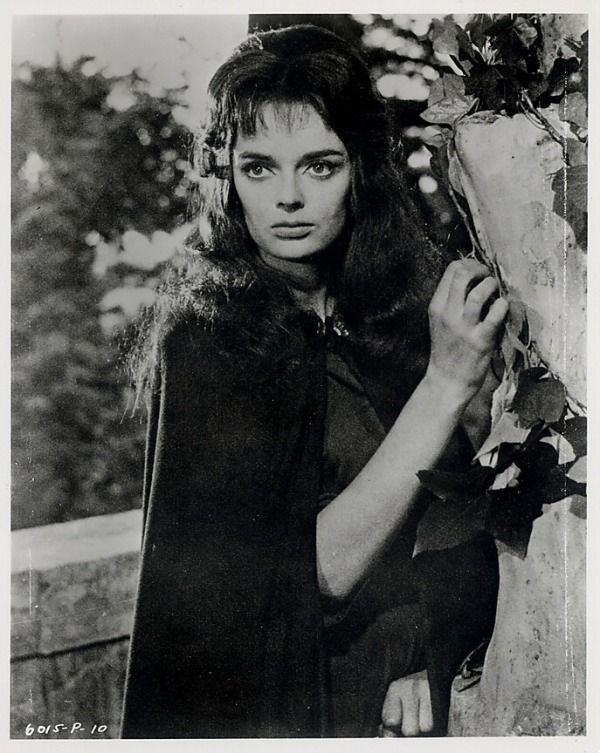