Time marches on, and so does my look at Marvel Premiere! As the good Doctor is being drawn into a mad adventure through time, we see the emergence of a powerful mage named Cagliostro! This man is from the past seems to be so powerful, that Dr. Strange and Baron Mordo both seem to be jut pawns to him, but is he really who he claims to be? As the Doc and Baron Mordo attempt to convince Cagliostro that each of them is worthy of his attention, but he seemingly couldn’t care less!

Time travel can be one of those things that get terribly convoluted and quite frankly foolish. One man who has proved on more than one occasion that he’s up to the task of writing a good time travel story, is Steve Englehart. If this story isn’t enough, pick up a copy of the trade paperback, “Celestial Madonna” for another tale with the time-hopping Kang the Conqueror! Once again, Frank Brunner shows us how incredibly talented he is, by giving us another issue filled with fantasy and magic! Throw in the Crusty Bunkers (inks), John Costanza (letters), and Roy Thomas (editor), and you’ve got one fantastic creative team! 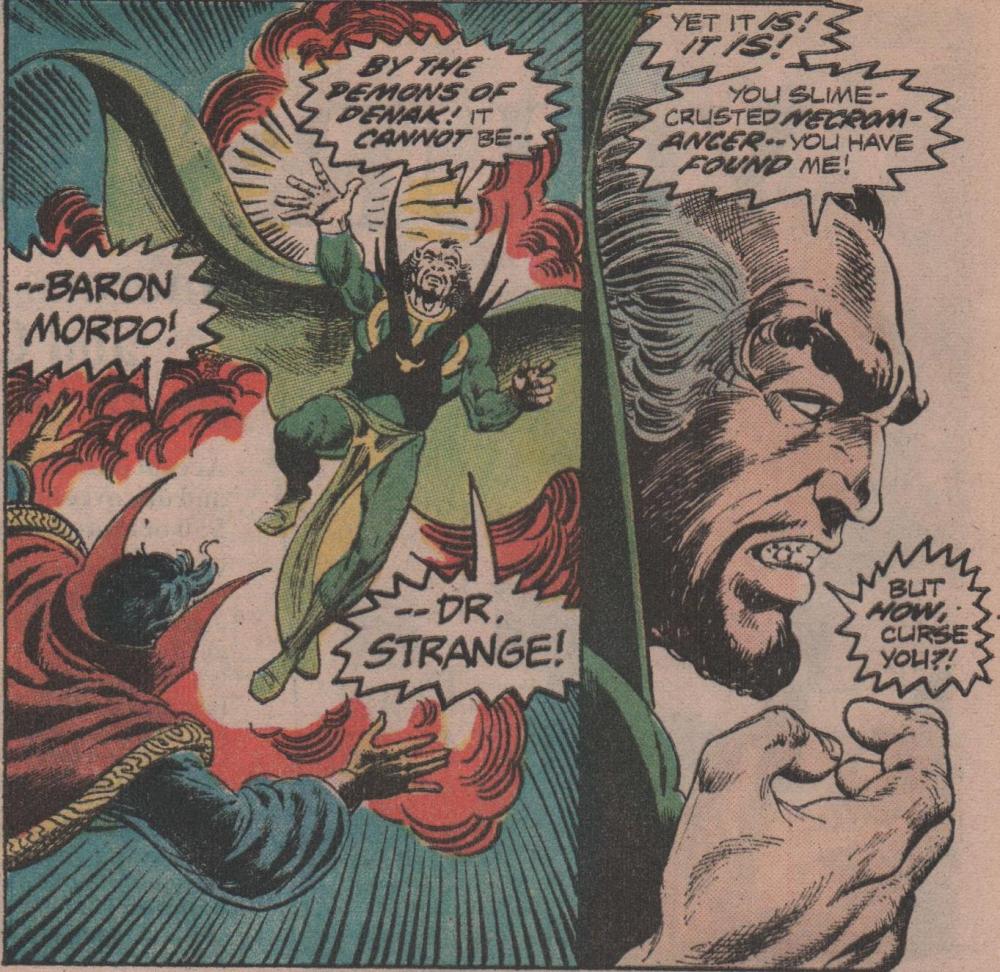 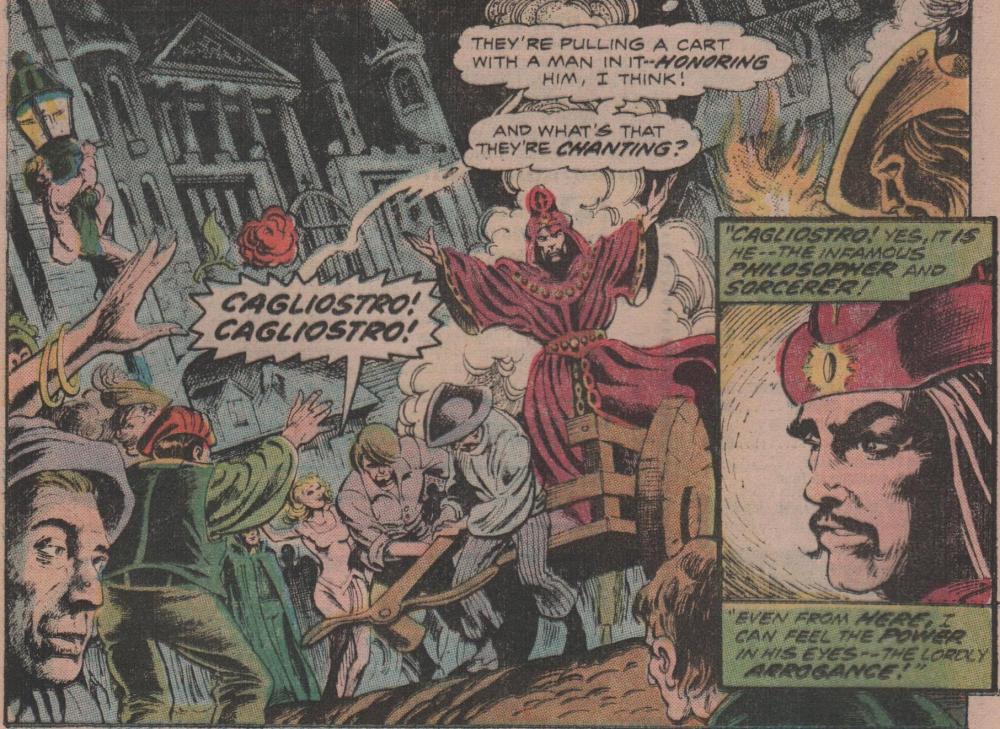 Some of you may be wondering why I skipped issue #11. Easy answer is because it basically just reprints the origin of Dr. Strange, by Ditko and Lee. Not that the material isn’t great, but that’s not what this is about. There was a little bridging material, where the Doc went to the former dwelling of the Ancient One, and told his followers that the master is dead. In this issue, the Doc runs into a bunch of gypsies, and a huge Gargoyle! The run of Doc Strange in this title was coming to an end soon, but Englehart and Brunner sure didn’t slow down with the excitement!

For reasons unknown to me, Mike Friedrich scripted some of this issue, and he’s obviously a capable writer, and left a good imprint wherever he traveled. We know that Englehart and Brunner were just getting started with the good Doctor, and they would bring him to new heights, never before seen. No disrespect to Ditko/Lee or Thomas/Colan, but this team set the tone for decades to come, and along with John Costanza lettering, and the Crusty Bunkers inks, this issue is another gem of the run! 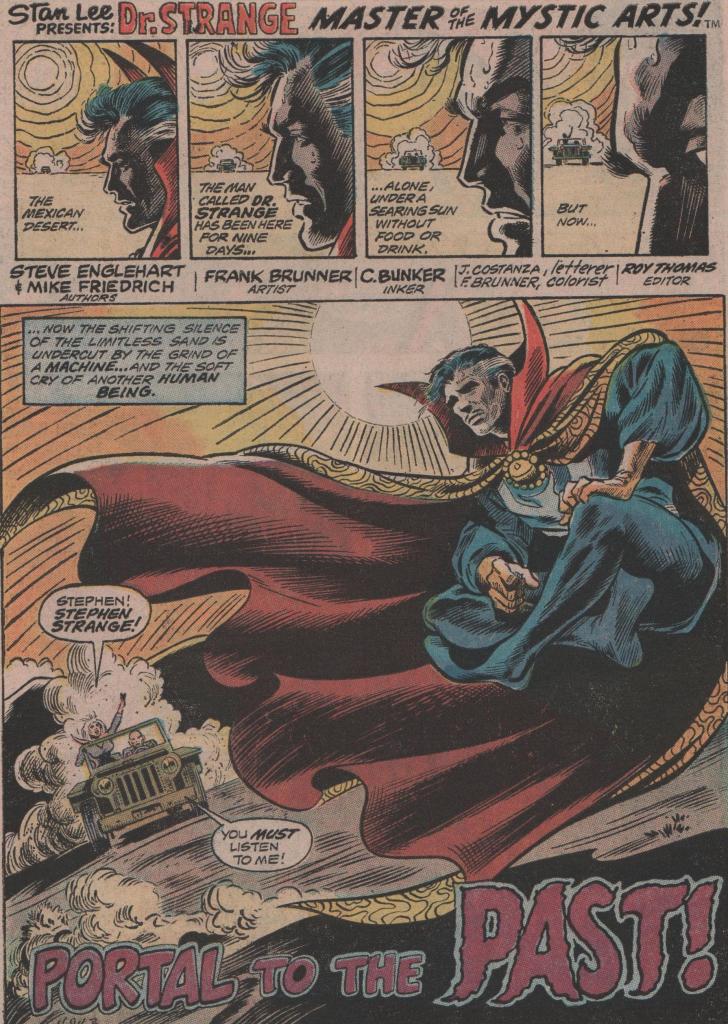 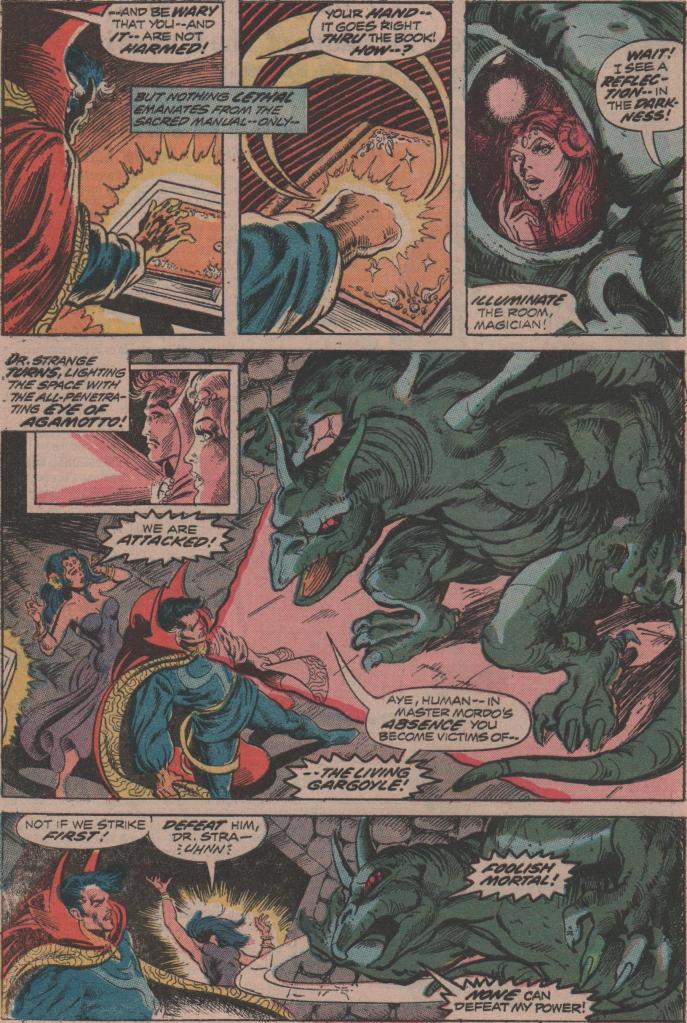 To close out 2014, and my month-long look at Dr. Strange, I thought it would be cool to throw another more recent read out there. As I’ve said before, I’ll try anything Dr. Strange, just because he’s my favorite character, and he’s a good one. So, when I heard Marvel was coming out with all  new material that they were going to release as graphic novels, I had to grab a couple of them! I own the Avengers: Endless Wartime book, but I was really impressed by the Doctor Strange: Season One hardcover that came out in 2012. It’s basically a retelling of the Doc’s origin, but a few slight twists. All the big guns are here; Baron Mordo, Dormammu, The Ancient One, and more!

The story is written by none other than Greg Pak, and if you want to read anything of his definitely check this out, plus “The Incredible Hercules” ongoing from 2008-2010, and a title from Aspen Comics called “Dead Man’s Run.” I’m not sure if the latter was finished (it took quite a while between issues to come out), but it was super cool! Not to be outdone, is an artist that I think it going to be huge sooner than later, (she’s already awesome in my book), Emma Rios (Pretty Deadly)! I first saw her work on a Doctor Strange mini-series from 2010. It was absolutely gorgeous, and I became a fan instantly. Another creator that must be mentioned is Jordie Bellaire. To say that she is one of the top colorists in comics is an understatement, for sure. Just look t the colors in this story, and you will be amazed! Happy New Year! 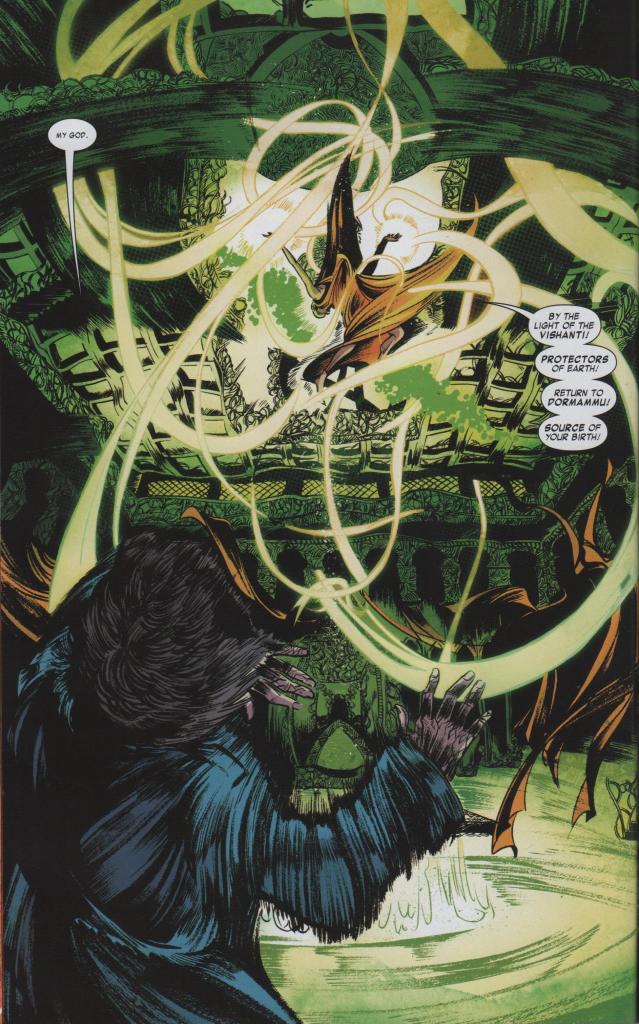 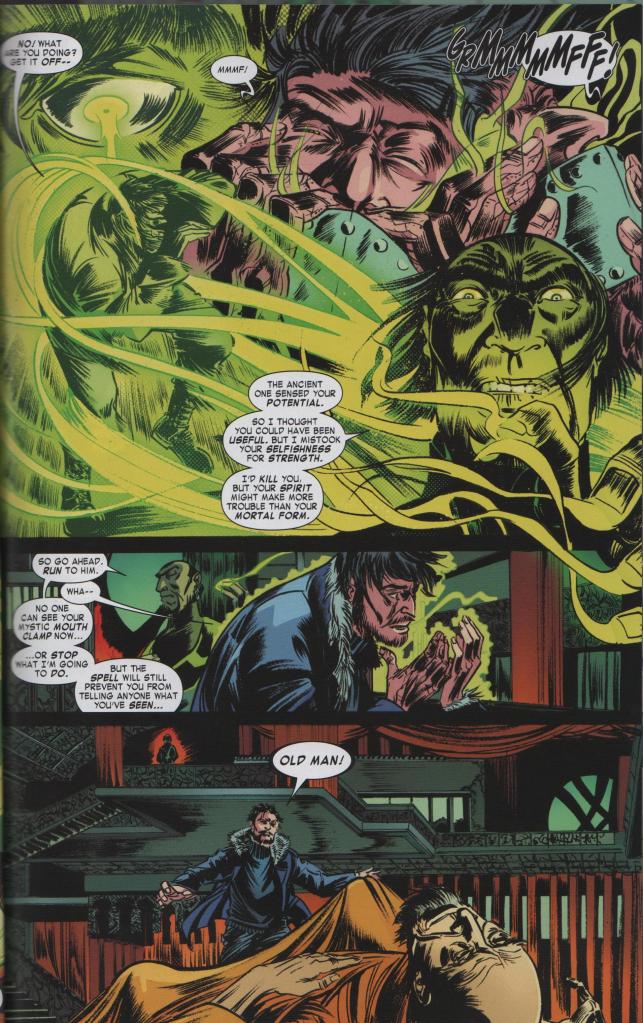 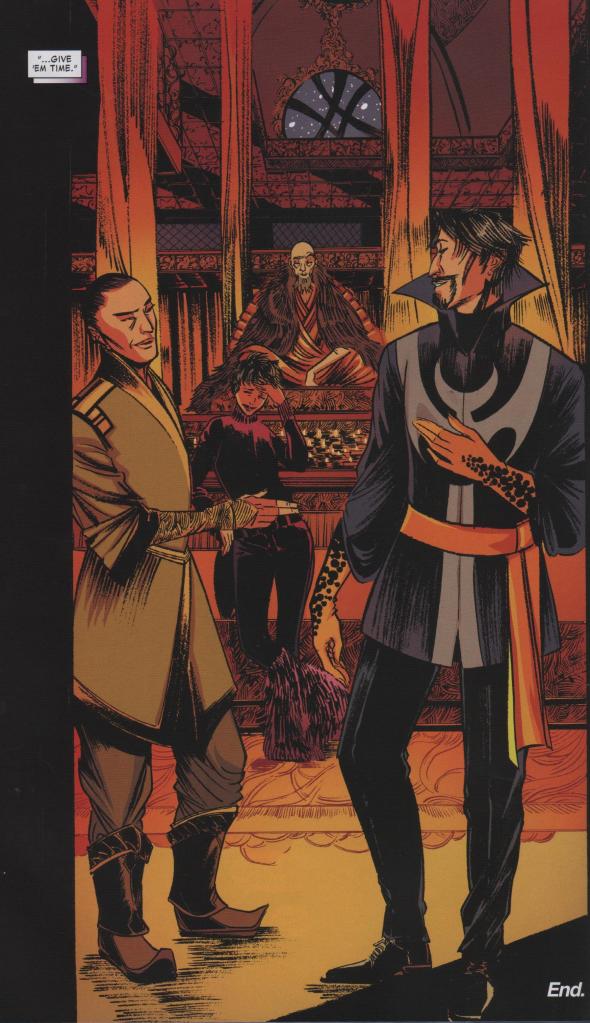 I think you’d be hard pressed to find a better cover/interior combination than this one. Gene Colan’s career had already seen some of the highest of the highs at this point, having already spanned over thirty years. Michael Golden was just getting started with his career, and he was a change of pace that the industry needed as far as I’m concerned. A great mix indeed, and when you get a strong story from another pro who was rather young in his comic book life, it cannot be denied that this was a good time for comics, and for the Sorcerer Supreme, Dr. Strange! In this wild tale, Clea and Sara have switched bodies for the moment, and the Doc ends up almost getting beheaded!

A story this awesome could only be brought to you by Chris Claremont (writer), Gene Colan (pencils), Dan Green (inks), Jim Novak (letters), Bob Sharen (colors), Michael Golden (cover) and Jo Duffy (editor)! Doctor Strange versus a cadre of sorcerers bent on his destruction, and a dragon that would make J.R.R. Tolkien jealous! All this and more wait inside the pages of this Bronze Age classic! Enjoy! 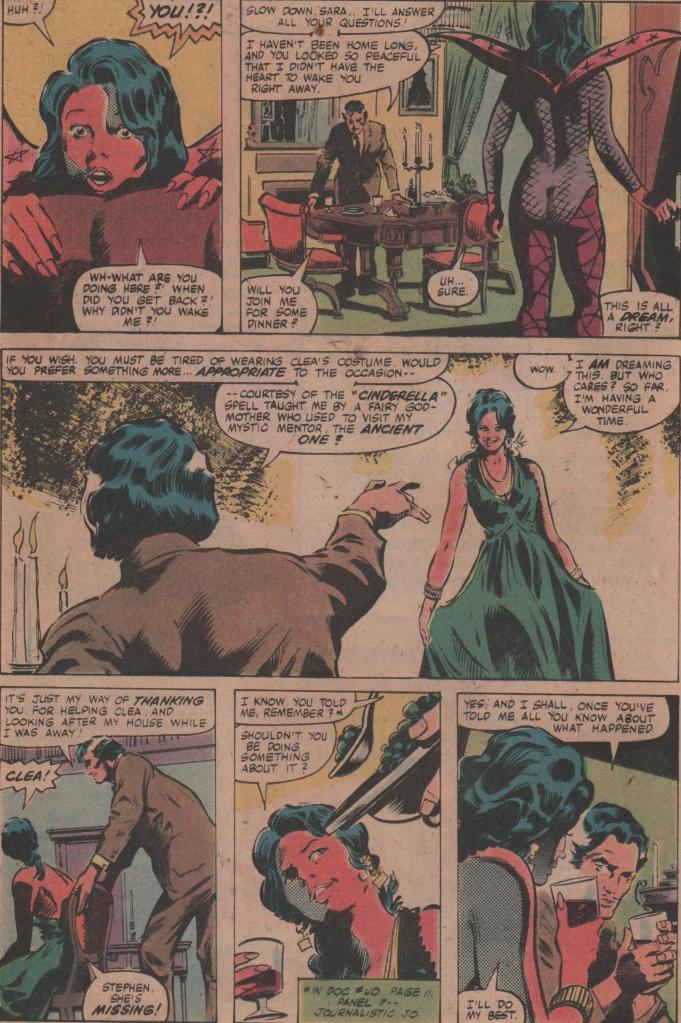 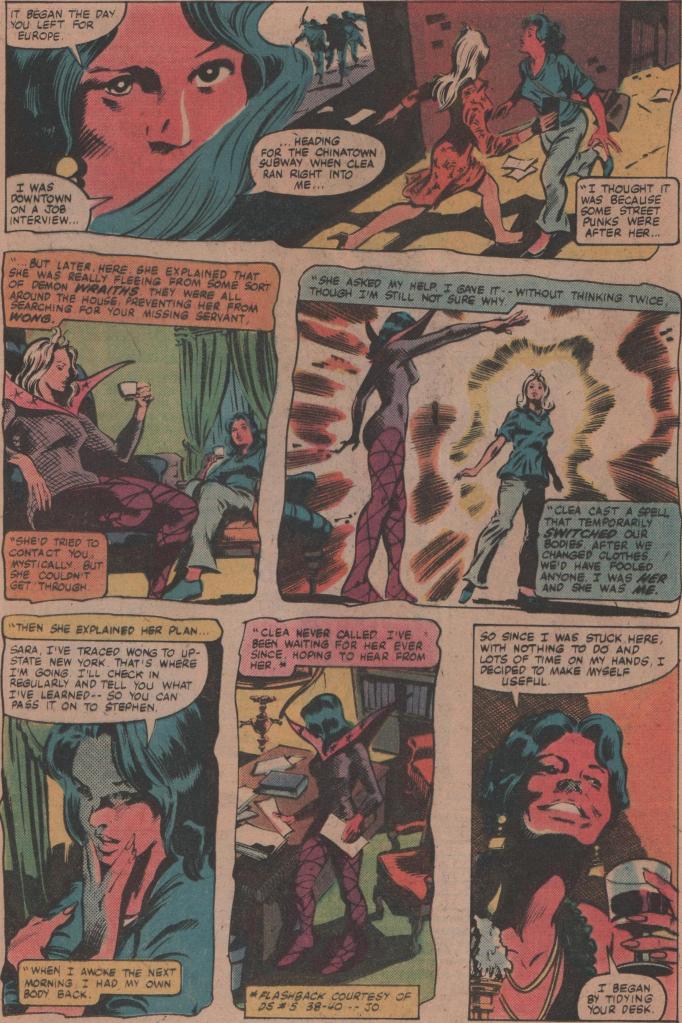 My love for Manny is documented, and of course, as most people agree, the first volume was better than the second. Mostly because of Steve Gerber and Mike Ploog, and obviously those two gentlemen had an incredible grasp on the character that was difficult to follow. I will admit though, that Chris Claremont and Don Perlin also seemed to be able to relay the silent emotions of the character quite well. In this story, Doc Strange travels to the swamps of Florida, and runs into Manny. For some unknown reason, his magicks are not working on the muck monster, and this spells trouble for Steven!

I know there is a lot of love out there for Swamp Thing, especially the Alan Moore stuff, and rightly so, but definitely give Manny a chance. The Gerber stuff is outstanding, and this second volume is very underrated, and deserves a shot! Written by Mister X-Men himself, Chris Claremont, pencils by Dandy Don Perlin, inks by Bob Wiacek, colors by Ben Sean, letters by John Costanza, and edited by Denny O’Neil (cover by Bob Wiacek)! 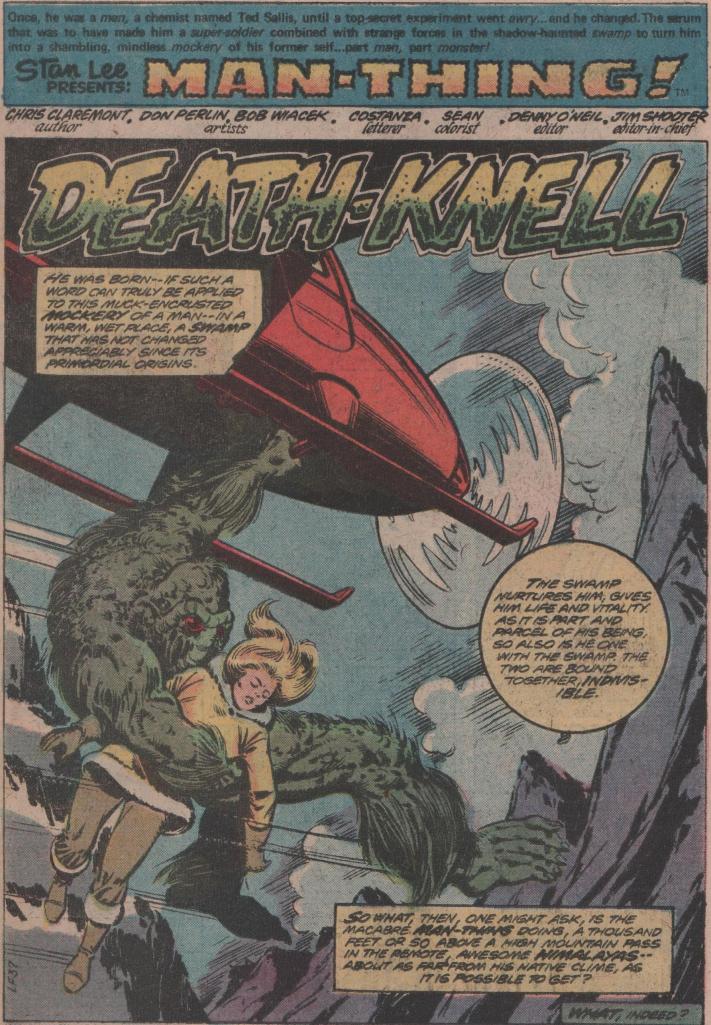 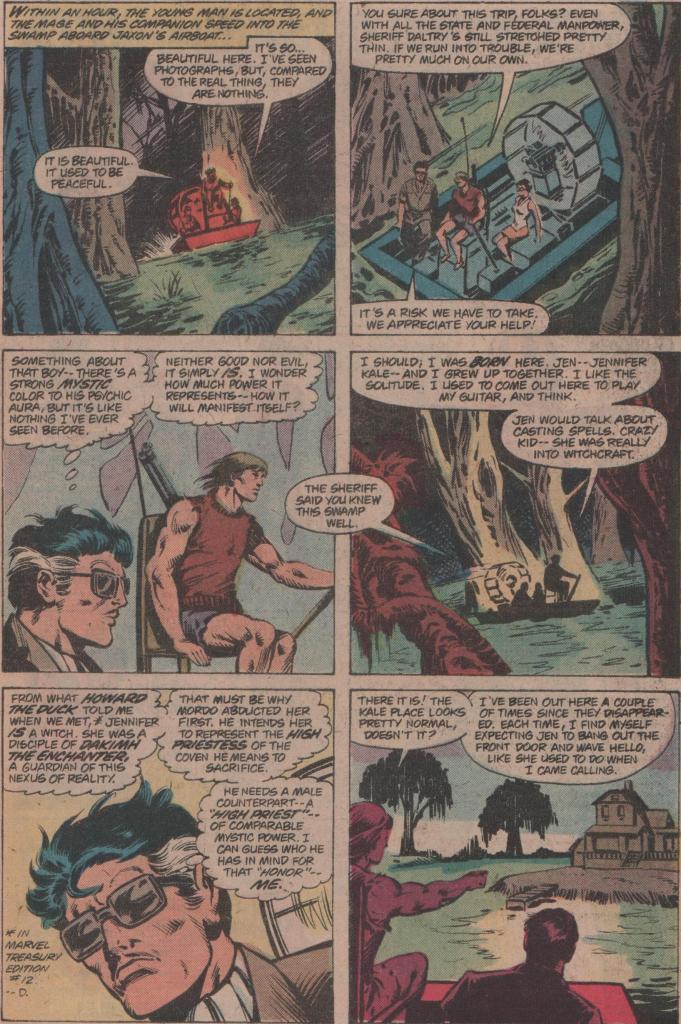 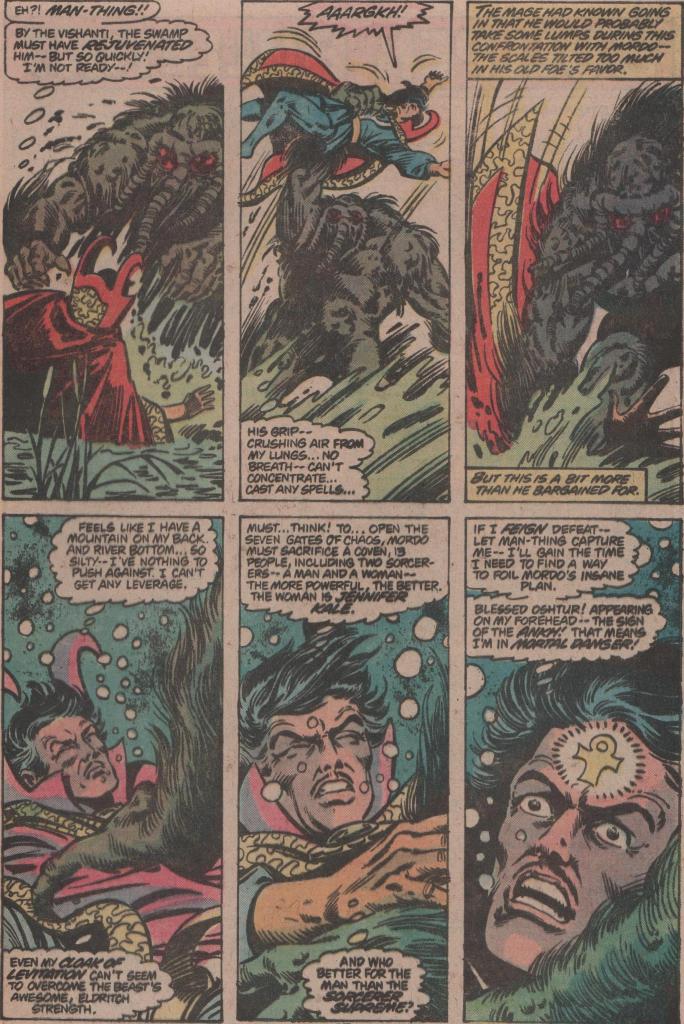