Title: Planet of the Vampires

It just recently hit me that I’ve never reviewed a film by legendary Italian horror master, Mario Bava! This man created the horror scene in Italy overnight. His contributions to the genre are undeniable, and he has the catalog to back it up. A quick Google search will net you dozens of films he made, and quite a few you should not only recognize, but have seen. One of these films is Planet of the Vampires.

Definitely look up some of his films (a few are on Netflix as of right now, I believe), they don’t have high production values typically, but the atmosphere is pretty cool. Well, that’s enough for now, let’s get to the film… 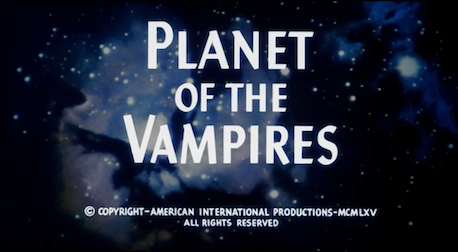 The movie begins with two spaceships heading to a planet that’s emitting a distress signal. As they communicate with each other, suddenly the view screen goes dark, and communications are lost. The crew has no idea what’s going on, and before they know it, the ship is pulled down to the planet by force. The Captain, Mark Markary (Barry Sullivan), is very concerned because his brother is on the other ship. As the occupants begin to wake up from the crash, they go crazy, and attack each other. The only one that seems to be able to keep his wits about him is the captain. He eventually gets the crew under control, and they’re visibly shaken, especially Sanya (Norma Bengell). 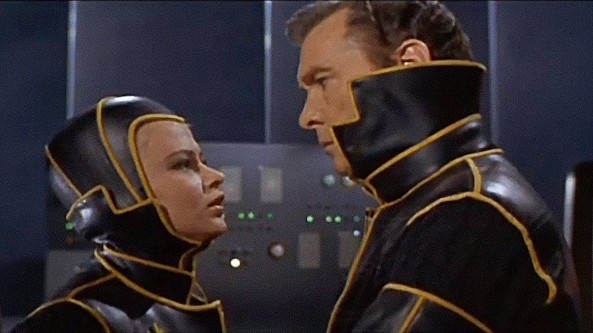 The first thing they do is set out to find the other ship and see if they’re alive. The planet seems to be a barren wasteland and nothing but a mysterious fog rolling around seems to be even remotely recognizable. After a quick distress call from the other ship, but the batteries that run the ship are dead, so they have to hot-foot it to the other ship. As they make their way across the rugged terrain, they realize that although it looks rocky, there is also lava in certain spots. Once the reach the other ship, they find two dead crew members outside. A victim of a fight from the same madness, no doubt.

As they enter the ship, they find a few more crew members dead from the same affliction or something worse. They do notice that there are three crew members unaccounted for, and that definitely raises an eyebrow. They bury the dead, and then attempt to get into the bridge of the ship. They can’t gain access, and realize they need a cutting torch from their ship. They leave one crew member behind to stand guard (yeah, he’s basically a “red shirt”). When the others return from the ship, he’s gone. They then go inside the ship to search for the missing crew member, and now, the bridge is open. Not only that, there were four bodies they couldn’t bury that they left in there, and they’re gone.

Back outside the ship, the one crew member standing guard sees something that makes her cry out, and then weep. The others rush outside, but she’s basically having a nervous breakdown. As they run back to their ship, the dead that were buried rise up from their graves and look like they’ve been to hell and back. The crew decides that tomorrow they’ll begin to try to fix the ship to try to escape this planet. As they sleep, there are two guards posted. They hear noises, but only see illuminated globes floating around. As the Captain heads outside to check on the guards, one of them shrieks, and when the captain and the other guard investigates, they find the guy torn up real bad, and as he’s in his death throes, he insists that the captain of the other ship did this to him.

As night goes on, more and more crew members get slaughtered, and eventually, we find out that not only are the dead rising, but that they are possessed by an alien life form that wants nothing more than to get off of this planet. And they do it by any means necessary! The engineer, Wes, believes that he can reignite the batteries, and get the ship going. He’d better, because if he can’t, they might not make it through another night! 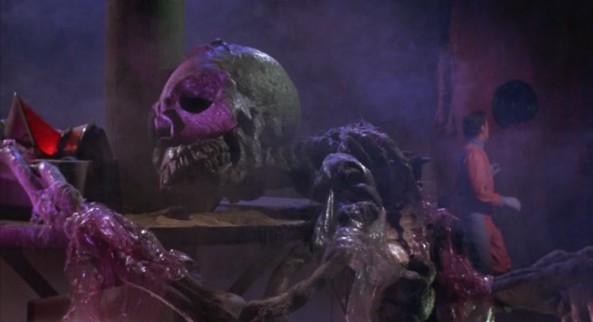 Along with another film I recently reviewed (It! The Terror from Beyond Space), this one is frequently credited with partially inspiring Ridley Scott’s 1979 classic, Alien. Both of these films definitely gave him some ideas, no doubt. I think the budget was $50 for his movie. I’m not kidding, and if you doubt me, read up on the production of this one, you’ll be blown away by the way this movie looks compared to the budget. Very moody, and atmospheric, and the fog machines coupled with the multicolored lights really make the set look cool. The pulsing sound also reminds me of another classic horror flick. “John Carpenter’s The Thing,” has that ominous pulsating music to it as well, that sounds like the heartbeat of the devil himself!

The actors did a decent job, but nothing Oscar worthy. Sullivan and Bengell are pretty good, and carry most of the scenes. The space ships are a little disappointing, but again, when you look at the budget, you can understand why. The dark corridors of the ship were frightening, but the technology was very sub-par.  Bava certainly knows how to make something out of nothing, sort of like Carpenter did with his first few films (and Hammer, Amicus, AIP, etc.). 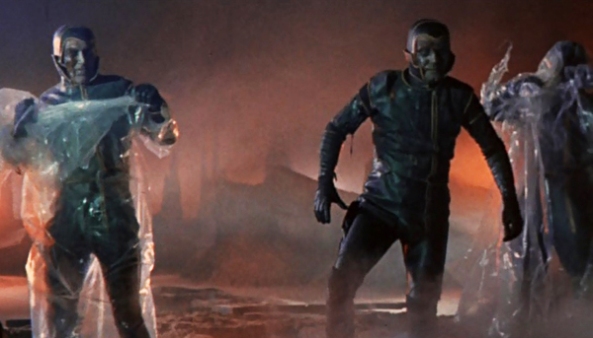 Grab some popcorn, turn down the lights, and sit down and watch this classic sci-fi/horror flick. Then look up more of Bava’s films from his heyday, you wont be sorry!