As I pondered what to blog about this week (I’m behind a bit), I rifled through some boxes. I came upon one of the few issues of Jungle Action that I own. They’ve become a bit expensive since the Black Panther movie hit, and rightly so I guess. It’s just the way the business works these days. Little did I know that the next morning I’d wake up to see that Chadwick Boseman (T’Challa in the Black Panther film, among others) passed away after a four year battle with cancer. One image I saw brought me to tears, and summed up his life beautifully. An image of him at a children’s hospital, visiting sick children. We’ve lost a good man, and that one image (below) tells who he was perfectly. Godspeed, Chadwick Boseman.

Now, onto the comic. In this issue, T’Challa must face down Killmonger and his minion, King Cadaver! These players are on a collision course, beyond the “mythical mists” of Wakanda. Well, not only does T’Challa have to deal with them, but Sombre as well! Sombre is a supernatural character that has a touch similar to that of the Death-Stalker. It is incredibly painful and corrosive, and he seems to have telepathic powers as well. So you could say that Sombre is one tough hombre (sorry, I couldn’t help myself). As usual, we see some incredible martial arts from Black Panther, as he fights henchmen, Killmonger, and a pack of ravenous wolves!

This is definitely one of those books where I can honestly say the art and writing were on par with each other’s greatness. Don McGregor (writer) and Billy Graham (pencils) were one of those creative teams from the Bronze Age that always delivered. Whether it was in this title or an obscure story in Monsters Unleashed, these two creators gave readers what the wanted then and now in 2020. The inks are by Klaus Janson (interior and cover), colors by Glynis Wein, letters by Dave Hunt, and cover pencils by Rich Buckler!

Do yourself a favor, and seek out the work of these men. Read it, pour over the artwork, and you’ll see how comics made in the 1970s are still as powerful now as they were back then. The title Jungle Action, started off as a reprint book showcasing stories from the 1950’s of…well, jungle action, from the series of the same title (and others). In issue #5 however, the book became a vehicle for the Black Panther! This Jack Kirby creation was very prominent in the pages of the Fantastic Four, but after Kirby left, it seemed like the character lost his home. The character would find a home here, then transition to the Avengers, and become a regular there for a time.

The writer, ‘Dutiful’ Don McGregor, is one that had the Midas touch when it came to certain characters, and the Black Panther is definitely one of them! Teamed with penciler ‘Riotous’ Rich Buckler, the two would be a solid duo that cranked out many great books over time. Inks by ‘Santa’ Klaus Janson, letters by ‘Titanic’ Tom Orzechowski, colors by Glynis Wein, and edited by ‘Rascally’ Roy Thomas! 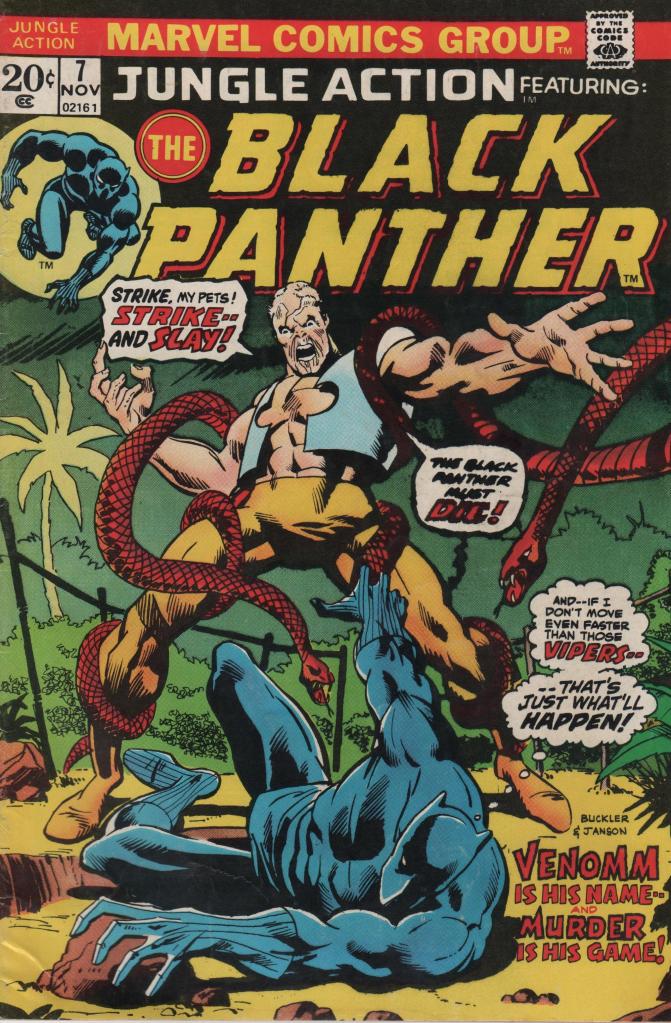 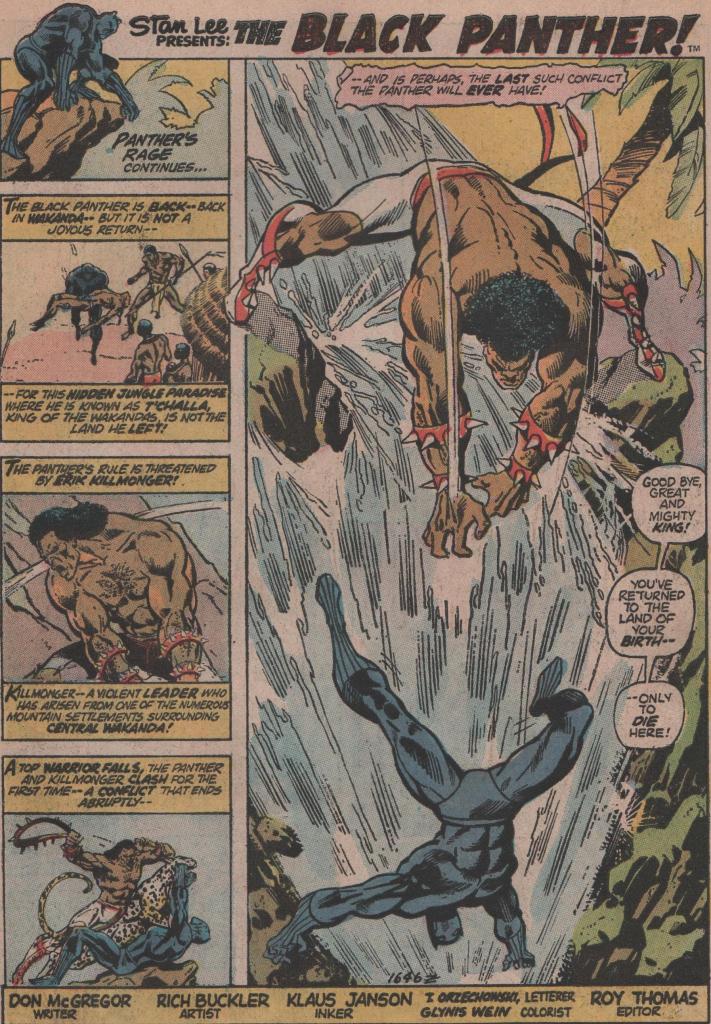 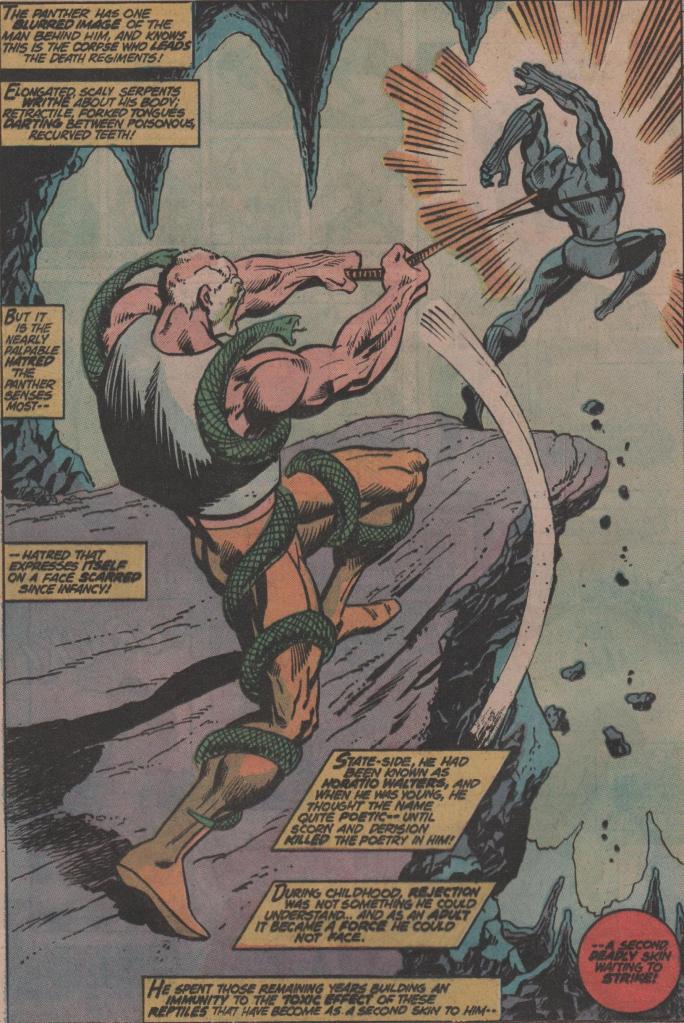 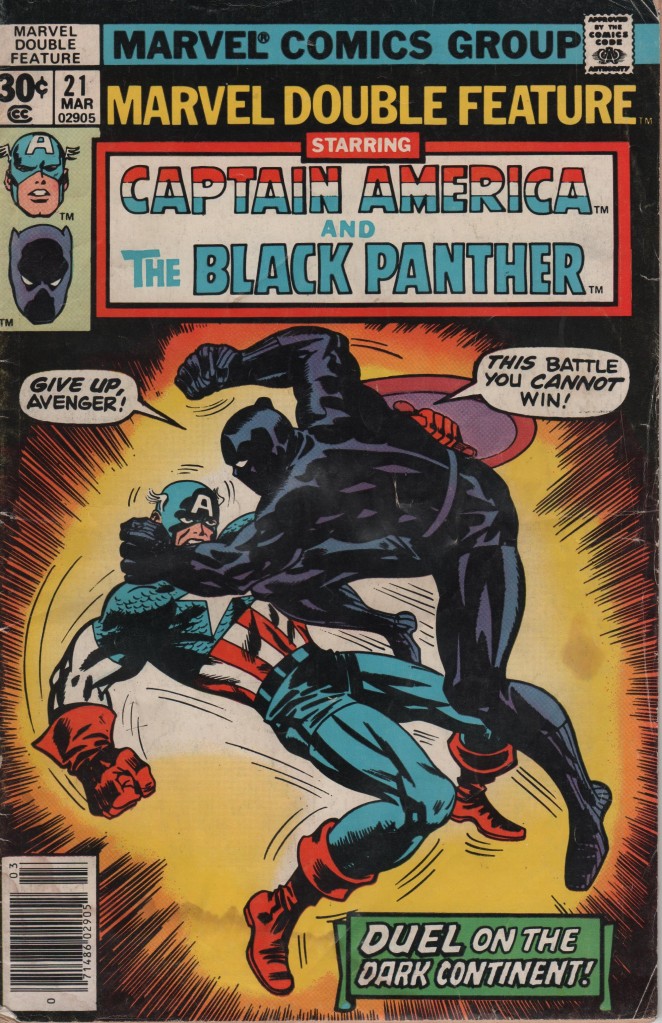 In this, the penultimate post of February, and of my month-long Jack Kirby tribute, I give you a gem of a story! Captain America versus the Black Panther! You’ve got to love superhero fights, as they are almost as cool as super villain fights! In these two reprints, Cap heads to Wakanda at the behest of the Black Panther, but when he arrives, he’s attacked by that very same hero! Moments later, T’Challa tells Cap that he attacked him to make sure he was the real deal, and not an impostor. Both men know there are some shenanigans going on in the jungle, so they leave to investigate. They find some crazy device, but it’s very heavily guarded. They manage to subdue just about everybody, but then a beautiful spy knocks them both unconscious with some energy weapon!

After Cap and Panther have been revived slightly, they are being held against their will, but by whom? It doesn’t take long for their tormentor to make his presence known. It’s the nefarious Baron Zemo, and he’s out for revenge against Cap, and also wants to take over the world or some nonsense. Can Cap and the Panther get loose in time to stop him? Who is this mysterious blonde super-spy that seems to be helping Zemo? You must read this story to find out!

This issue is one of those rare instances where you get such a variety of work from Kirby. The jungles of Wakanda, outer space, the Panther’s lair, and everything in-between! Yes, you really get to see Kirby at the height of his powers in this one, and as usual, you wont be disappointed! Enjoy! 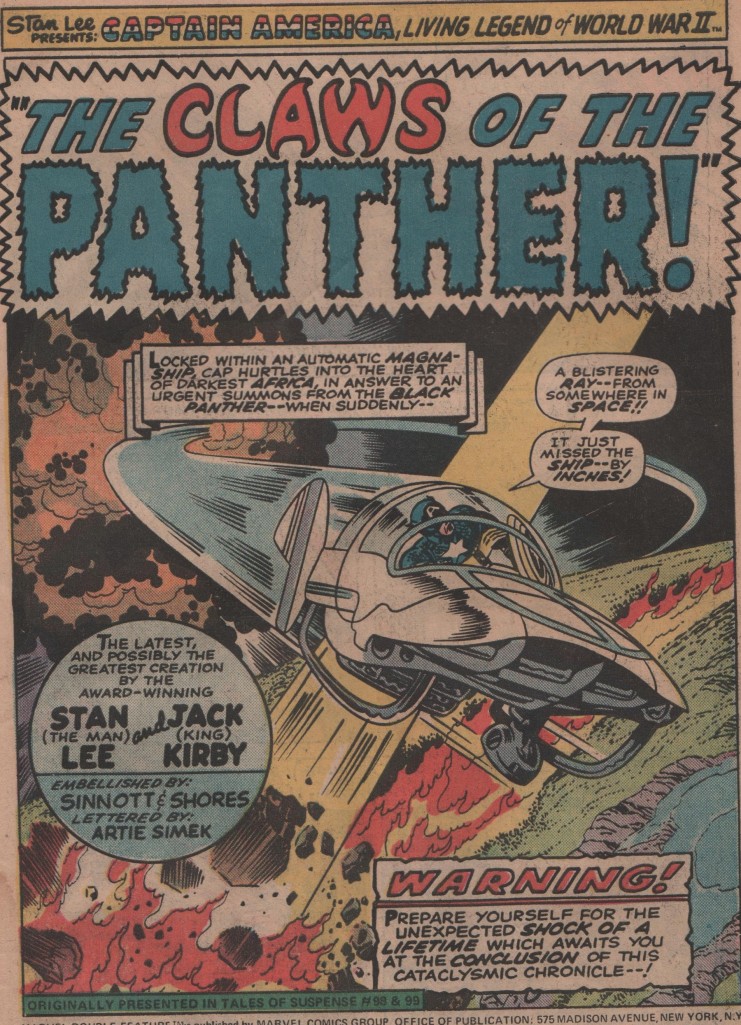 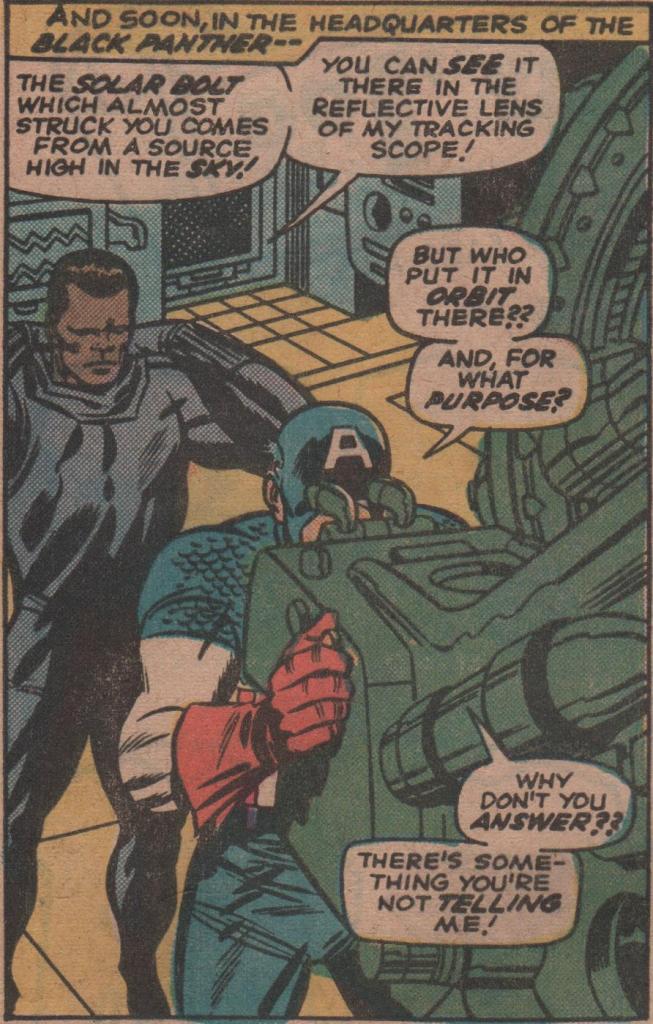 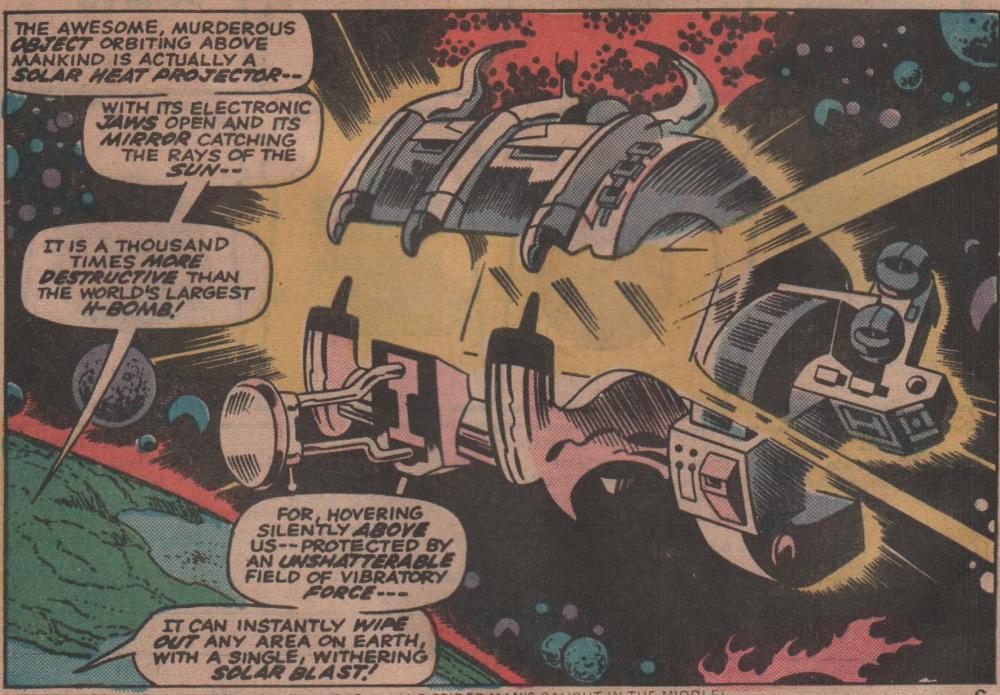