As October swings into its final week, some of the old school monsters need to get their due. One of those monsters is a nemesis of the Hulk. Of course, the Hulk is a monster of sorts in his own right, but most don’t consider him one because of the human counterpart, Bruce Banner, or maybe because he’s had periods of time where he was split from being both man and monster. Either way, he’s had plenty of opponents from the realm of monster-dom! One of the best (if not the best), is The Glob! This monster is one that gets lost in the mix, but definitely take a closer look at this behemoth of the bog! And yes, this monster does predate Man-Thing, and Swamp Thing, by a few years! Also, keep an eye out for a special appearance by the Leader!

The character was created by the same team as this book. Roy Thomas (writer) freely admits ripping off The Heap with his creation (The Glob). No shame in admitting that, as most would deny it until their last moments. Oh and its been done numerous times, so there’s really no need to get all riled up about it, especially when the creator admits to it. The art on this one is by probably the most iconic Hulk artist of all time, Herb Trimpe! He had an iconic run with this character (maybe only second to Sal Buscema), and is remembered fondly for it. Trimpe also did the cover art, and the letters are by Sam Rosen. (This story originally appeared in Hulk #129) 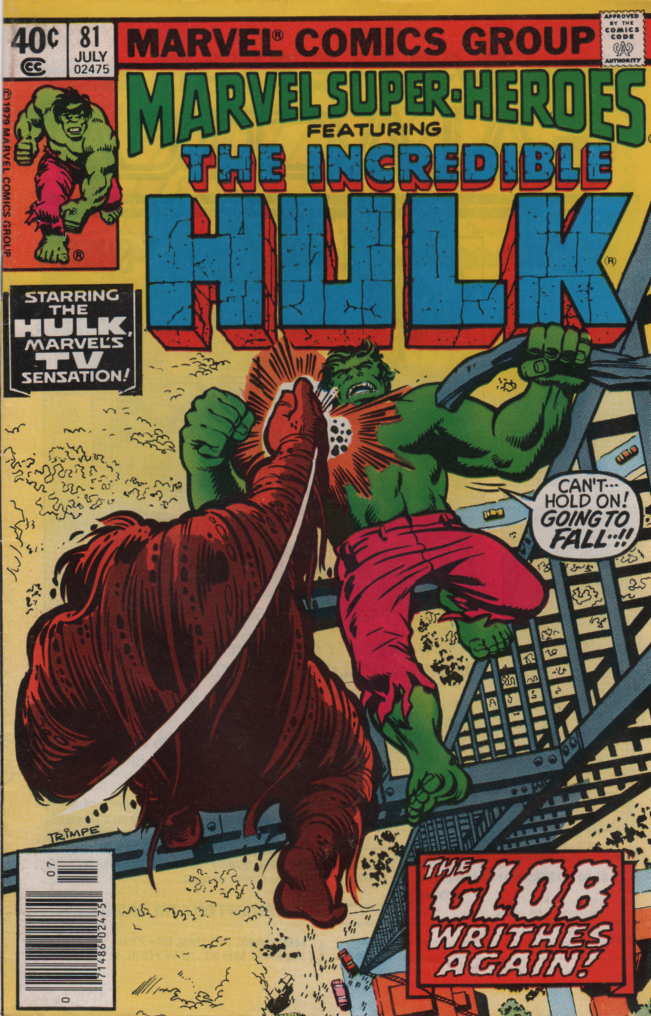 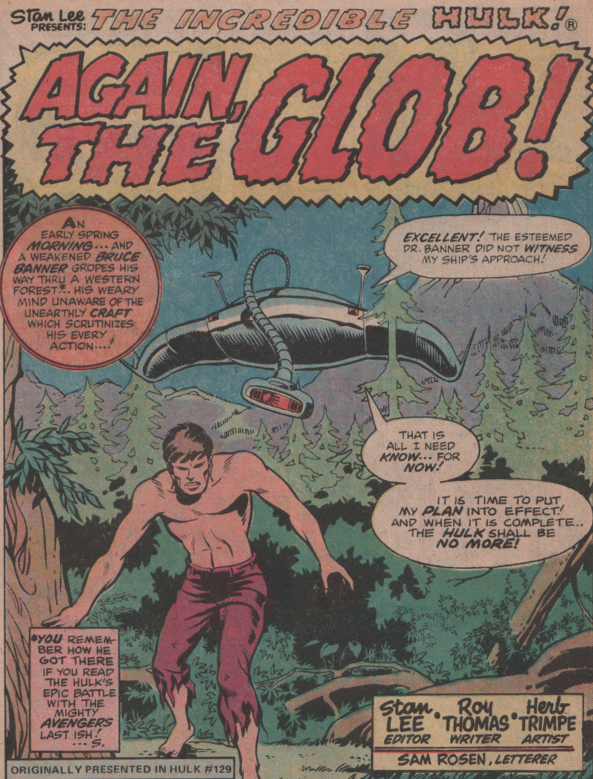 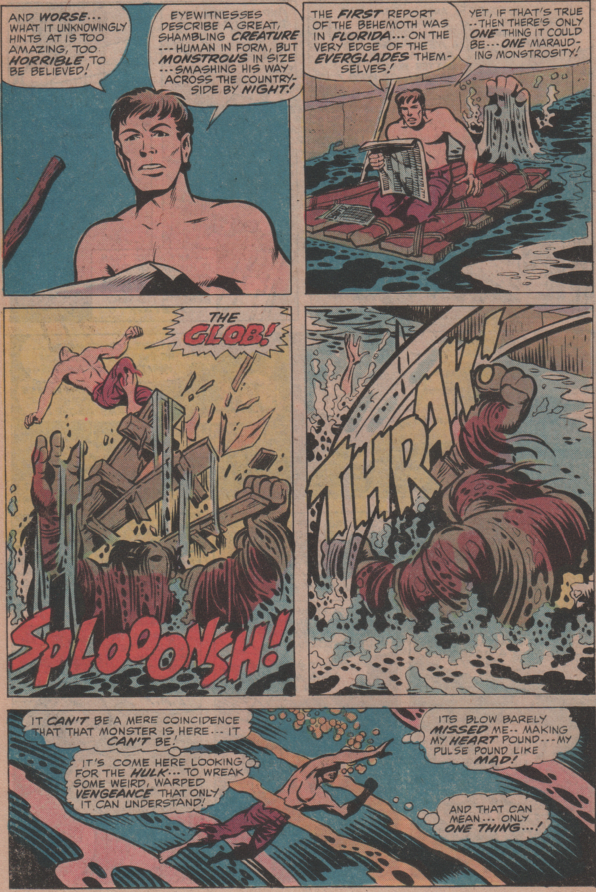 A few years ago, I discovered the awesomeness known as Treasury Editions. I knew of their existence, but never bought one due to the hefty price-tag they usually carry. Being a huge Doctor Strange fan though, I grabbed Marvel Treasury Edition 6, as I just couldn’t pass up the book and the $10 sticker! Back to the matter at hand though. Recently issue 17 popped up in front of me and just from seeing the cover and knowing there would be work by Herb Trimpe, Roy Thomas, Archie Goodwin, Sal Buscema, etc., I couldn’t resist buying it.

The cover blurb reads…”A Cataclysmic Collection of Classic Confrontations!” That blurb isn’t one of those familiar bait and switch deals, it’s for real. Inside we get four incredible stories, and each one shows the Jade Giant in some wars that he doesn’t necessarily come out of as the winner. Yep, he’s known as the strongest one there is, but it is cool to see even the strong get humbled and beaten once in a while. One of my favorite horror creatures and Hulk antagonists ever is in the first story, too! 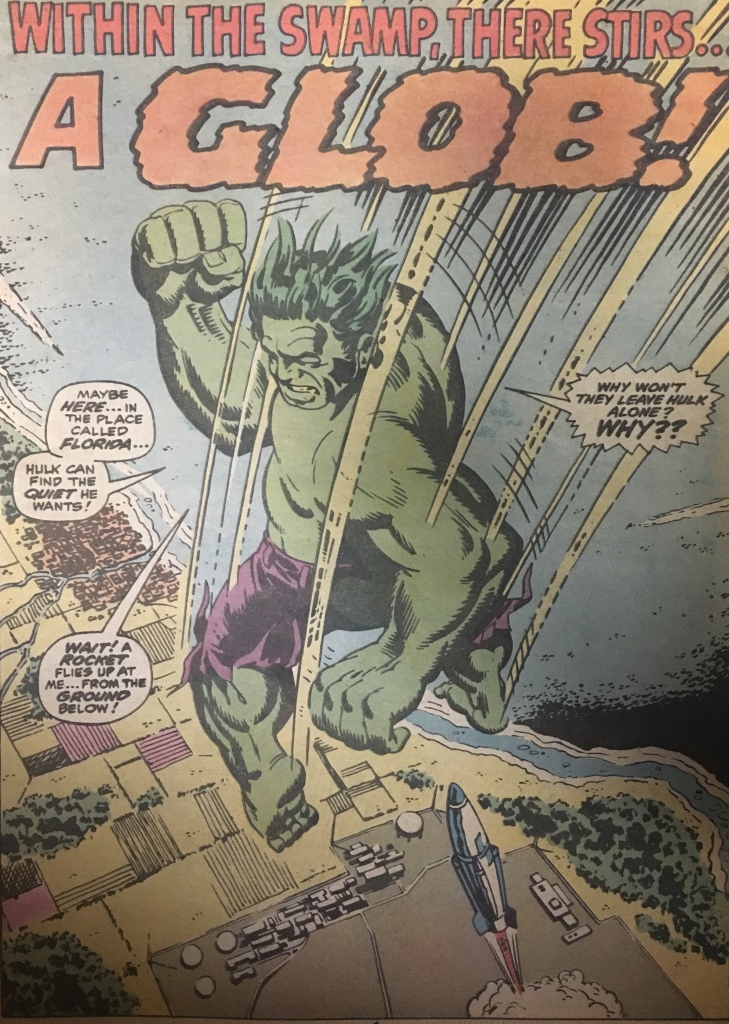 Ever feel alone? Like no one else even cares? The Hulk knows about these things, and a lot more! Bruce Banner/The Hulk is one of the most interesting characters Marvel (Kirby and Lee) ever created. The scientific aspects, the pain Banner feels when he realizes what the Hulk does when he’s out of control, his love for Betty but not being able to be with her, her father wanting him dead, etc. This issue focuses on a character called Moonstone (the first appearance of this villain), and her shady beginnings. Also some Doc Samson for fans of that character.

The cover to this book is one of my all time favorite for this character, and exactly why Herb Trimpe (R.I.P.) is such an under-appreciated artist (inks by Bob McLeod). His work spanned several decades and I think we should all give him more love, yes even if it is posthumous. The story is written by two gentlemen, and both are names that you will easily recognize. Roger Stern and Peter Gillis did a fine job on this one, and showed all the classic tropes that made the Hulk such a wonderful, and sympathetic character. The interior artwork is a great team, and anytime you get Sal Buscema (pencils) and Bob McLeod (inks) together, it’s a good time. The colors are by Phil Rachelson, the letters by Bruce Patterson (Bob Hall, editor). 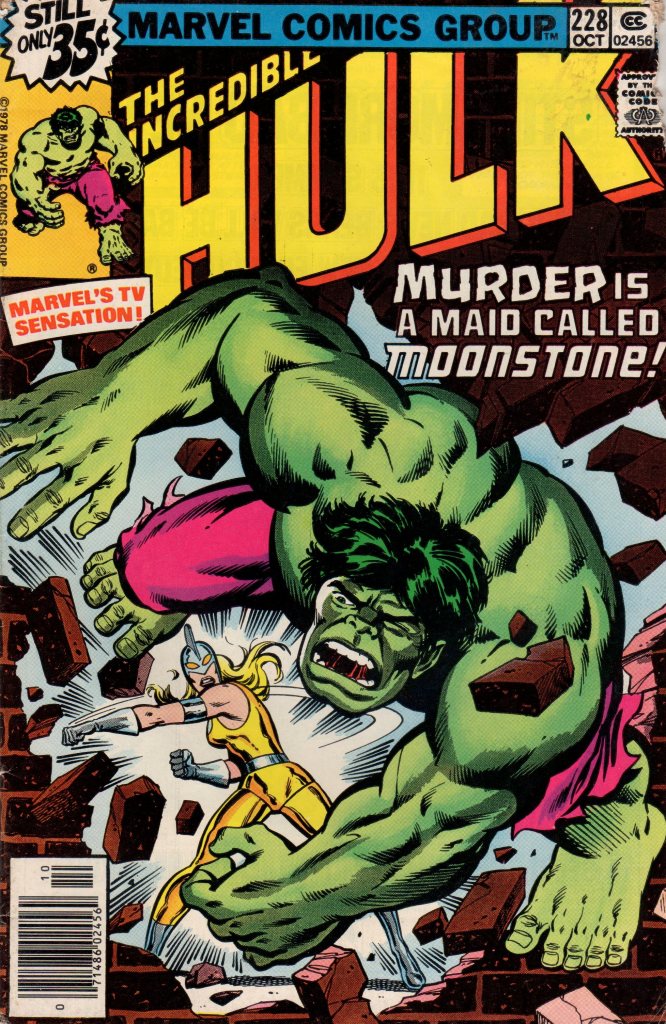 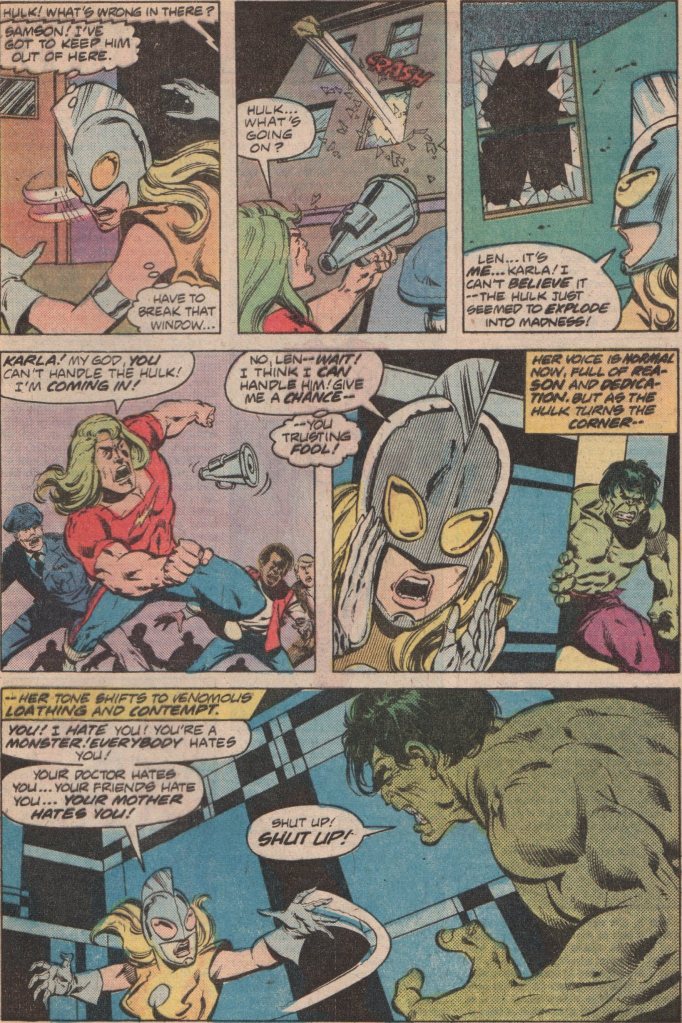 The Hulk has had his ups and downs, as far as sales, and even in the overall quality of the work on the character over the years.  He’s an interesting character with the dual-identity, that gives authors many different angles with which to attack a story. In this anniversary issue, we see nothing but the monster, as Nightmare has forced Bruce Banner away, and nothing remains but the mindless beast! We all know that The Hulk is a bad mutha, and he gets tested by SHIELD, Power Man and Iron Fist, and even The Avengers! Thor manages to battle him to a standstill, but even he can’t put him away. The planet’s last hope is the Sorcerer Supreme, Dr. Strange!

The visual feast that this issue is, was brought to us by “Our Pal” Sal Buscema (pencils) and Gerry Talaoc (inker). Add on the colors by Bob Sharen, and you will read this book and think…”wow, they don’t make them like this anymore!” Seeing all these heroes battling an enraged monster is quite a delight. The the writer, Bill Mantlo, certainly needs no intro. His work is nothing short of legendary! Last but not least, we have Jim Novak on letters! (Cover by Brett Blevins!) 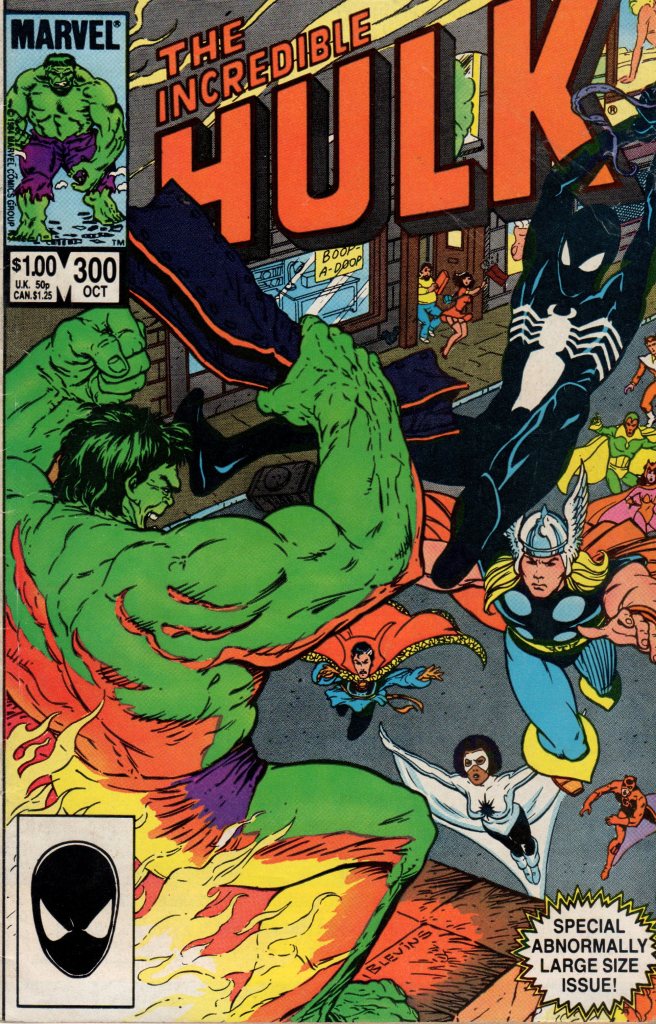 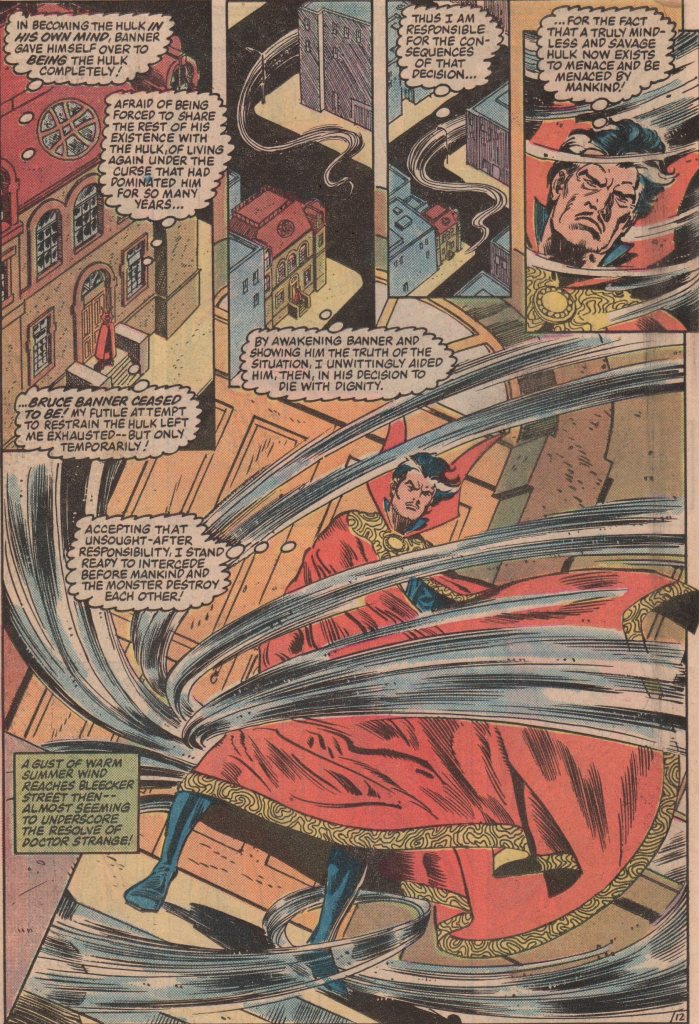 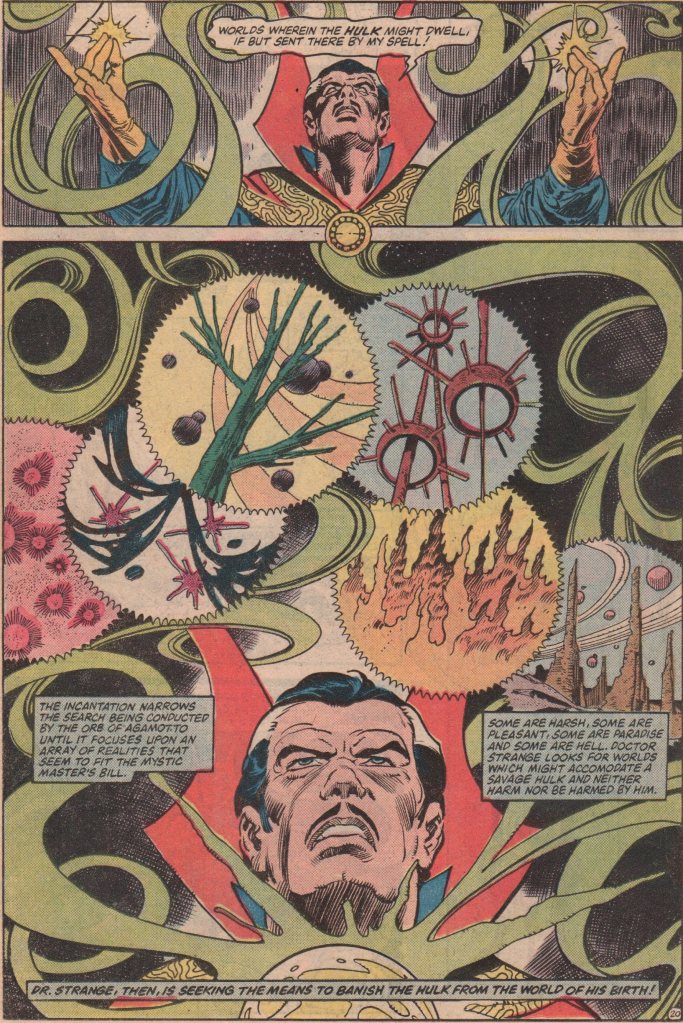 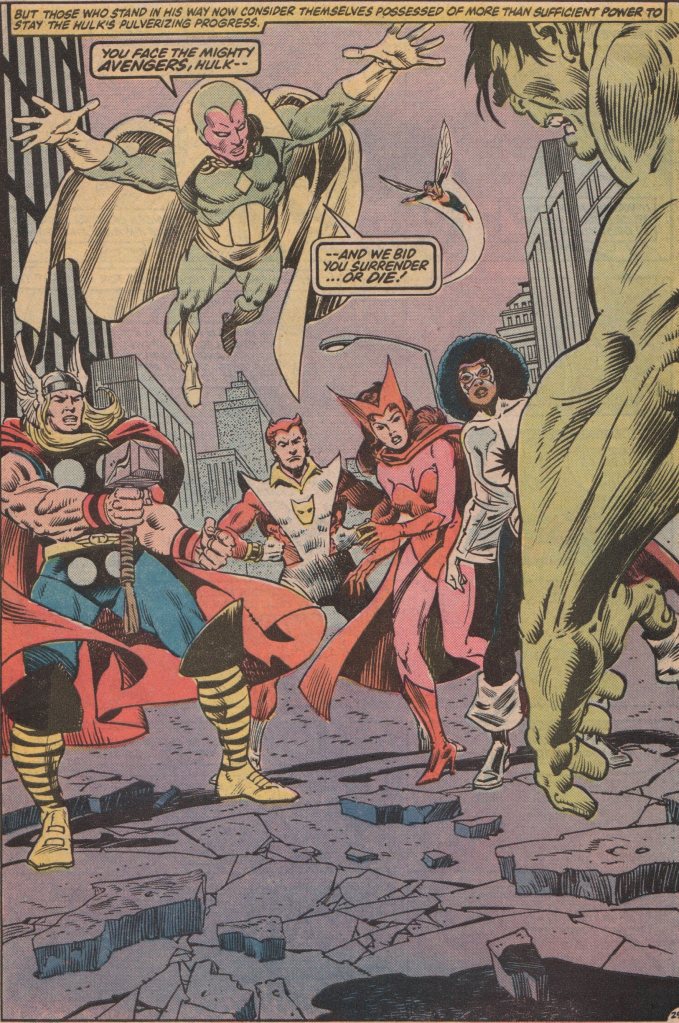