OK, so, after a few weeks of giant bugs, then on to more of a classic theme, I’d like to take a look at something a little more off the beaten path this week. And so we shall see The Werewolf, from 1956. There’s a unique spin on this flick, that instead of a wolf bite changing the man, a lab experiment results in the ability to transform. No big stars in this one, so the film had to use the sci-fi/horror craze to try to entice audiences. An experienced crew behind the camera helped get this one off of the ground, and you can see that through the entire film. Alright, let’s get to the film!

The film begins with a voice (Fred Sears), narrating. He tells the viewers about Lycanthropy, and its dangers! Next, we see a man, Duncan Marsh (Steven Ritch – image below) walking down the street, and then he ducks into a pub. He downs a few shots, then heads over to the fireplace to warm his hands. Another man sits at the bar with a creepy look on his face, and he seems to be taking quite an interest in the other man. The man leaves the bar, and the other gentleman goes after him. He stops him in the street and the two exchanges some words. The man who was at the bar first, asks him to buy a couple of drinks because he’s broke and saw the other man had some cash. He then tries to mug the guy and take his money. The scene shifts to the dark alley, and all we hear is some growling and screaming, and only one man exits the alley. An old woman is walking by and sees the man leave, she screams, and the people from the pub come to see what’s wrong. She claims two men were fighting in the alley but only a beast emerged. Deputy Clovey (Harry Lauter) heads in along with the others for a look. They see a dead man with his throat torn out.

The men then head into the forest to hunt this wild animal, and get more than they bargained for when they set out. They see wolf tracks in the snow, and two of the men get scared. Deputy Clovey tells them to head back into town and get the sheriff. A short time later, the sheriff comes back to town with Clovey, and his shirt is ripped into pieces. He was attacked by a wolf, but Sheriff Haines showed up and scared the animal off with his gun. He takes him to the local doctor, and Dr. Gilchrist (Ken Christy – image below) administers some first aid. His niece, Amy Standish (Joyce Holden – image below), is his assistant, and she’s also coincidentally engaged to Sheriff Haines.

The next day, Marsh waking up out in the woods. He’s extremely disoriented, and in pain. For some reason his shoes are missing, and it’s very cold outside. He cries out in agony, as it seems he remembers what he did while he was “changed.” Back in town, the sheriff informs the townspeople that no one is allowed in the woods until further notice. This upsets all the local hunters, but he tells them too bad. Some reporters make their way from the big city to Mountaincrest after they heard about the murder. The sheriff initially keeps them out, but then decides to let them through to try to find the story. Over at the doctor’s house, Amy is startled by Marsh, who’s come to get some help with his amnesia. he goes inside, and tells the two of them that he can’t remember anything about his past except a car accident, and two doctors taking him in to a room. He then confesses to the murder from the night before. The doctor and Amy look puzzled, and then try to give him something to calm him down, but he slaps it away and runs off.

Back in town, Amy and the doc tell the sheriff what happened. They ask him to not kill the guy because he’s out of his mind. The scene changes to a mad scientist-type laboratory. One man is working on a machine, and then another calls to him, and refers to him as “Morgan” (George Lynn). He and the other man, Emery (S. John Launer), read a newspaper and realize that the man they worked on has committed this murder. These two doctors have apparently been running experiments using a formula containing radiation. A ring at the door interrupts their conversation about what to do with Marsh. As Morgan answers the door, he’s greeted by Mrs. Marsh (Eleanore Tanin), and she’s wondering where her husband is since she hasn’t seen him since the car accident. Morgan lies and tells her that after they treated him, he took off and they haven’t seen him since.

Out in the wilderness, the hunting party isn’t having any luck finding this ravenous beast or Marsh. Morgan and Emery set out to try to find him as well, and have better results because they think like an animal. Emery finds him, but once Marsh realizes they’re here to kill him, he wolfs out, and tries to kill them. The sheriff and his posse show up and shoot at the beast, and he runs away. They question the two doctors, and their story is kind of shady, but they allow them to stay. The sheriff and his men then head back to town, and then post guards around town to stop any more slayings. The werewolf then turns to killing sheep, and the sheriff warns all the local farmers to get into town as quickly as possible. Amy is still trying to convince the sheriff that Marsh needs help, and not to be killed. 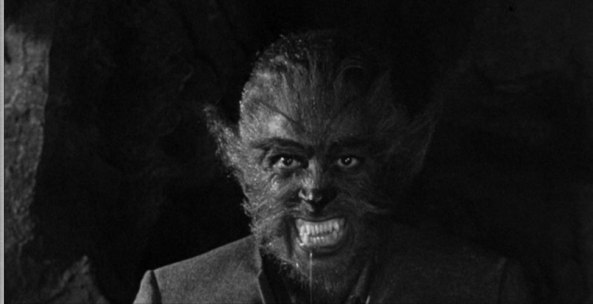 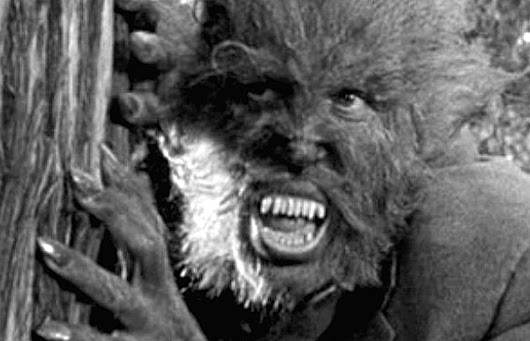 For a low-budget flick, this is a pretty solid film. Yeah, it’s mostly your standard fare from the 1950’s, but the angle of science creating the werewolf, and not a wolf bite was pretty cool. Having the two doctors get crazy and try to kill the werewolf was very different as well. Typically the doctors want to capture the beast, dissect it, and figure out how to do it better next time. Not here though. As far as the acting goes, most of the roles were pretty good, and even though none of the faces/names were familiar to me, I’m definitely going to seek out more from this crew! Well, definitely Joyce Holden (image below)!

The sets were OK, but nothing spectacular. The outdoor scenes were are alright, and the town settings were slightly better. The lighting was kind of low at a few points when they were filming indoors, but overall, it was nothing terrible. The music score didn’t do the film any favors, but had one or two high points. Producer/Director Sam Katzman has a list of credits a mile long, and when you look at it, his status in the industry is well deserved. Fred Sears (Director) is no slouch either, and made his mark in the film industry with some other solid movie credits. One note about the cast. The sheriff, Don Megowan, was also the Gill-Man in the third Creature from the Black Lagoon film!