As I wind down the last three issues of this series, beginning with the fifth installment, you’ll see a few different names in this one, previously unseen. With an anthology title, that’s usually the method most publishers roll with, and it can be very exciting. I think it can be slightly problematic when a certain creator did a fantastic job in a previous issue (or is just a fan favorite). There are a couple of familiar names, but lets not get ahead of things. The cover is by an artist that isn’t one I’ve heard before. Boada Puigdomènech (cover), an artist with only this one credit for Marvel, and a few for Skywald Publishing, does a fair job, but it’s definitely a step back from the previous four issues. A frontispiece by Howard Chaykin (more on him later) leads us into the action!

First up we get…Slow Glass, revisited! I know last time I said that was the end, but it was a ruse (by myself and Marvel)! We thought we saw the last of this story (and Mister Tyme), but not so. We see something very creepy from Roy Thomas and the art team of Gene Colan and Frank Chiaramonte!

Up first is “Paradise Found.” We see a space traveler arrive on a planet named Terra 2. He’s greeted by another guy that treats the aliens there horribly, but don’t worry, he gets his in the end. Written by Bruce Jones, with art by Gray Morrow!

The next few pages bring an interview with Larry Niven (conducted by Alan Brennert)! There are some super cool illustrations by Eliot R. Brown and Rick Bryant.

Next up is “All the Myriad Ways,” an adaptation of a Larry Niven story. A police detective investigating a murder, parallel universes, time travel, it’s all here! And, brought to you by Howard Chaykin (script, art)!

Don and Maggie Thompson bring us another great edition of “Fantastic Worlds” next! In it they discuss the Hugo and Nebula awards, rumors of a Star Trek movie, and some sci-fi conventions!

“Addict” is the next story in the book, and it is a wild one! We see a junkie in an alleyway beat his own dealer for some drugs. Well, not conventional drugs, that is. We also see some bureaucrats talking their usual disturbing rhetoric about needing to keep the populace under control (hmmm…nothing to see here, move along). Really good stuff here by Don Glut (story) and Virgil Redondo (art)!

The final story in this magazine, “Half Life,” is another solid entry. We see a monster-sized spaceship called The USS Agamemnon, that at first seems like a pleasure cruise. But, things don’t always work out the way they should, do they? Story and art by John Allison. 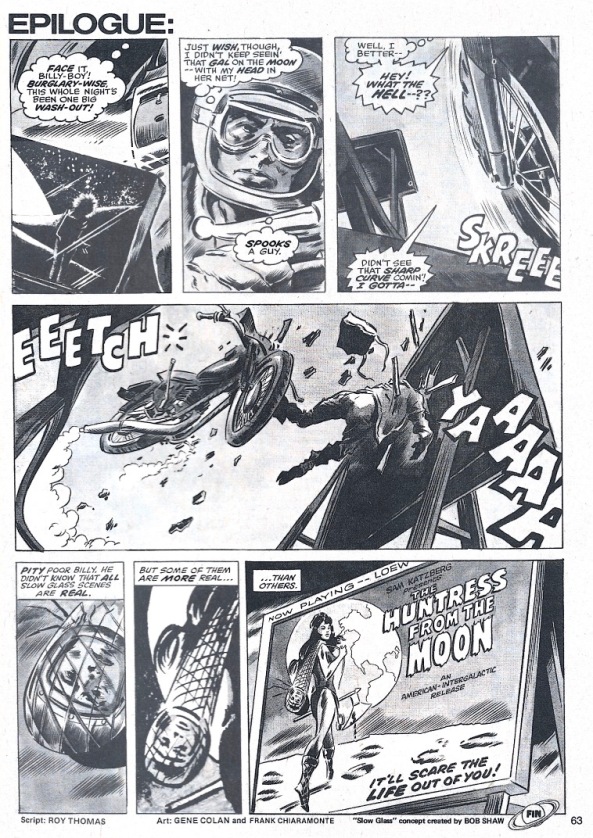 Eight simple words, that’s all it takes to get my blood pumping. Do you dare enter The House of Mystery? An anthology title from DC comics that started in 1951, the book went on for an amazing 321 issues! The stories were all over the place of course, as the times changed (and the comics code), so did the material. Honestly though, it wasn’t until the Bronze Age that the book had some of the best creators on it.

The cover to this book is by none other than Neal Adams (pencils and inks). He proved that no matter the genre, he can produce incredible work. The inside brings three different stories (along with some extras). The first is “The Gardener of Eden” by John Albano (writer) and the exquisite work of Jim Aparo! A doctor learns a new lesson the hard way! “Image of Darkness” brings a tale of terror when a husband and wife are having domestic problems. Written by Robert Kanigher, and art by Gray Morrow! Finally, “Nobody Loves a Lizard!” shows a boy with a pet lizard that has an incredible secret. Writer Virgil North, with art by Don Heck! 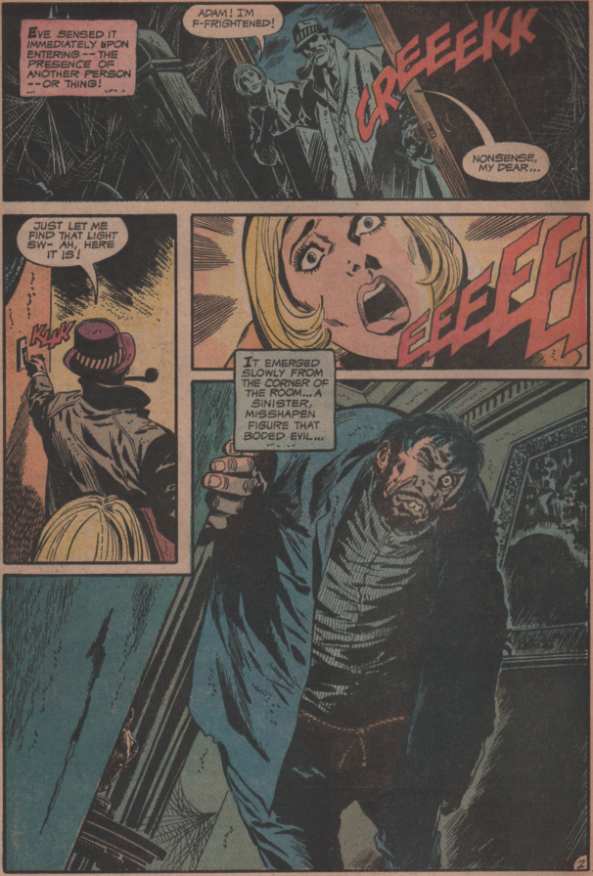 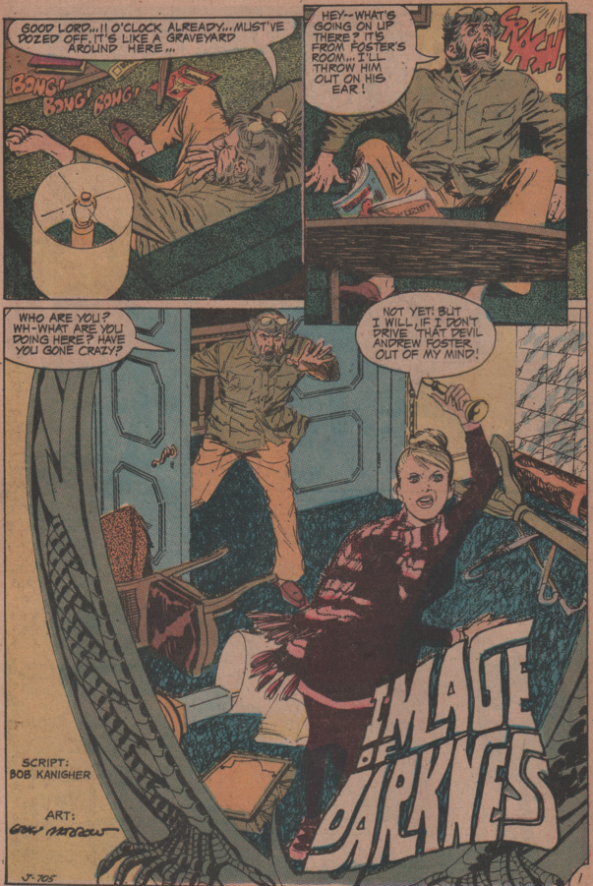 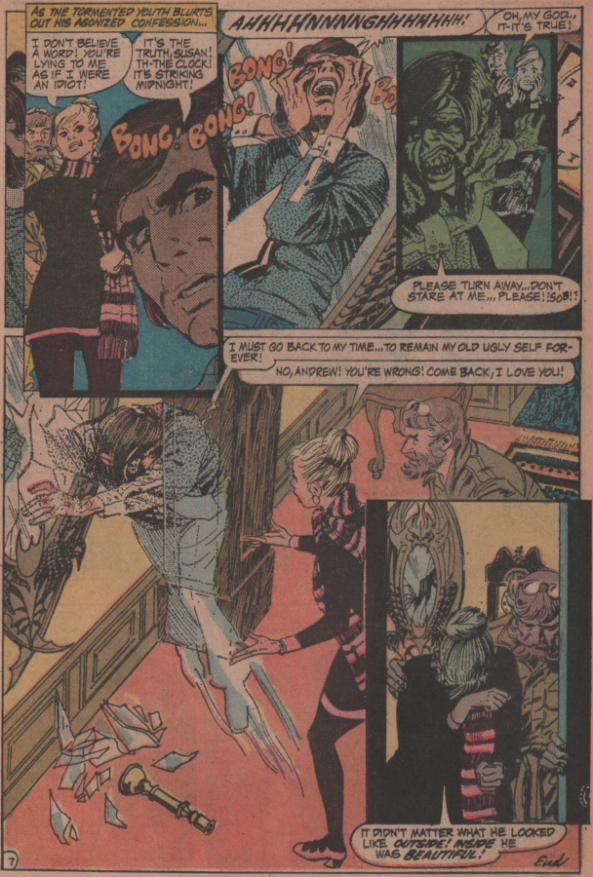 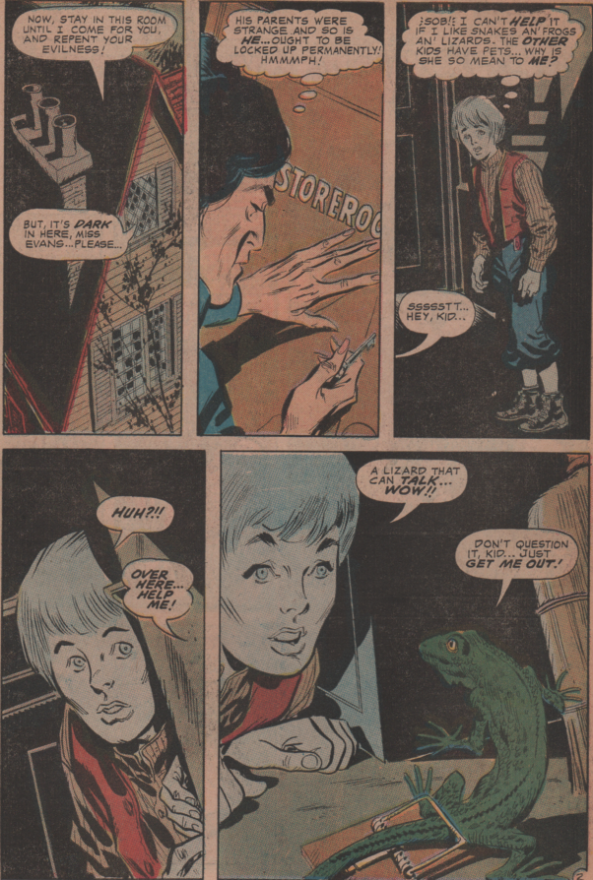 The black and white magazines from the Bronze Age have so much great material in them! Even if you don’t like horror comics, you can get Conan, The Hulk, etc., but trust me, the horror books are outstanding. Most have excellent artwork, and solid stories as well. Speaking of storytelling, What if I told you (yes, that was in my Laurence Fishburne voice) that Marvel one produced a magazine with names like Robert Bloch (Psycho), Robert E. Howard (Conan), H.P. Lovecraft (The Call of Cthulhu), and Theodore Sturgeon (More than Human). Would you believe me? Well luckily you don’t have to take my word for it. In this issue of Masters of Terror, that incredible list of writers are coupled with top artist of that era, and the results is mind-numbing.

The artistic talent is a murderers row if there ever was one. Marie Severin and Frank Giacoia show us a monster (It! adapted by Roy Thomas) that definitely inspired The Heap, Man-Thing, and Swamp Thing! The second tale is brought to us by Frank Brunner (story adapted by Gardner Fox), and anyone that’s read this blog (or anything else I’ve written about him)knows how much praise I’ll heap on the artwork of Frank Brunner (his collaboration with Steve Englehart on Dr. Strange/Marvel Premiere is a masterpiece). The Lovecraft adaptation has Roy Thomas scripting, and a powerhouse team on art that includes Barry Smith, Dan Adkins, and John Verpoorten! The next adaptation is scripted by Ron Goulart, and the art team is the incredibly talented duo of Jim Starlin and Tom Palmer! Finally, Ron Goulart, Gil Kane, and Ralph Reese bring a story about Jack the Ripper!

All of these stories are reprints that appeared in other titles before. Even the cover is a reproduction by Gray Morrow (from a cover by Jim Steranko – Supernatural Thrillers 1, 1972).  Another lesser known story in this issue that was adapted (originally by August Derleth) is called The Drifting Snow. Tony Isabella and Esteban Maroto deliver an absolute gem with this story. You will love this story because it’s very suspenseful and creepy! 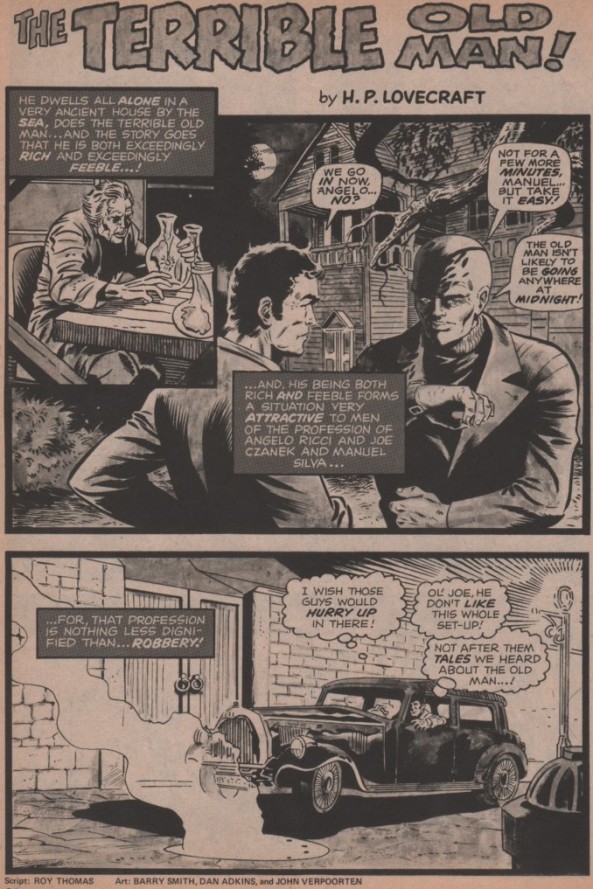 After getting an incredible deal on this comic, I figured I’d share this gem from the Bronze Age. This book contains the fourth appearance of the muck monster from the Florida Everglades! In this early appearance, Manny is caring for a baby that some animal threw over a bridge! After taking the child to a doctor’s home, he seeks revenge against the heartless man. We also get a quick two page recap of Manny’s origin. Gerry Conway (writer), and the art team of Howard Chaykin and Gray Morrow (cover art by Morrow as well) bring us this gruesome tale!

There are also two awesome back-up stories in this one too! “The Spell of the Sea Witch” (Allyn Brodsky writer, art by Jack Katz and Bill Everett!) is a tale about a crook that commandeers a boat that two young lovers are aboard. They run into some ghost pirates and then things really get crazy! Then we take a trip down to Davey Jones’ Locker, brought to you by Stan Lee and Don Heck! 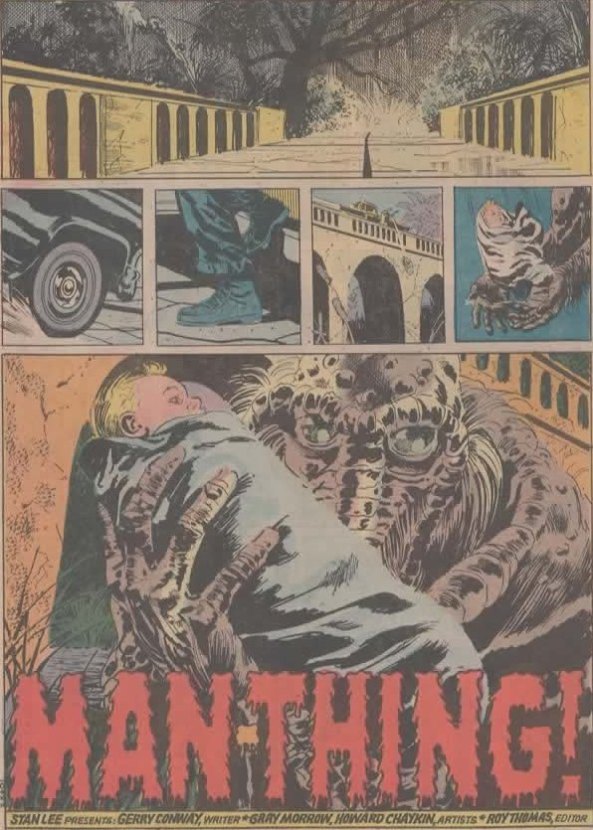 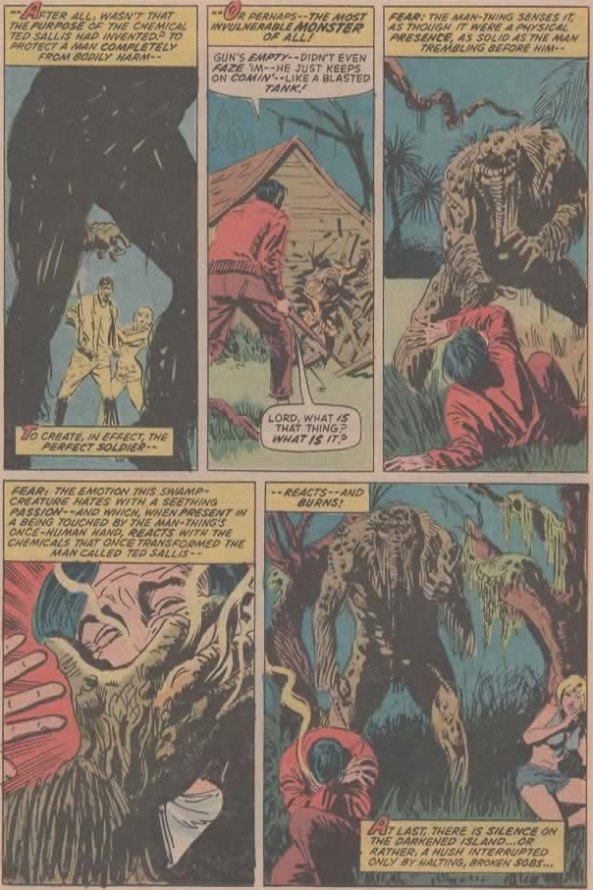 Alright, so far, we’ve seen the beginnings of what would become Marvel’s foray into the horror genre in the late 1960’s/ early 1970’s, so now it’s time to open the flood gates, and see some more hardcore action from this publisher! One of the earliest (and one of my personal favorites) monsters to roam the 616 Universe, is the muck monster, Man-Thing! This beast was once a scientist that was betrayed by his wife, a subversive agent of A.I.M.! Ted Sallis was working on a formula (the Super-Soldier Formula that gave Steve Rogers his extraordinary powers), but was attacked by his wife and agents of A.I.M. Sallis fought his way out of the lab, and drove his car off into the swamp. He then injected himself with the serum, and crashed into the murky depths of the swamp. Little did he know though, that the specific area where he crashed, was near the Nexus of All Realities, an area ripe with magical properties. These three elements joined to change him into the shambling monster that he is today. The vampiric Morbius followed, and the floodgates were then thrust wide open for many more macabre characters to make their way into the limelight! 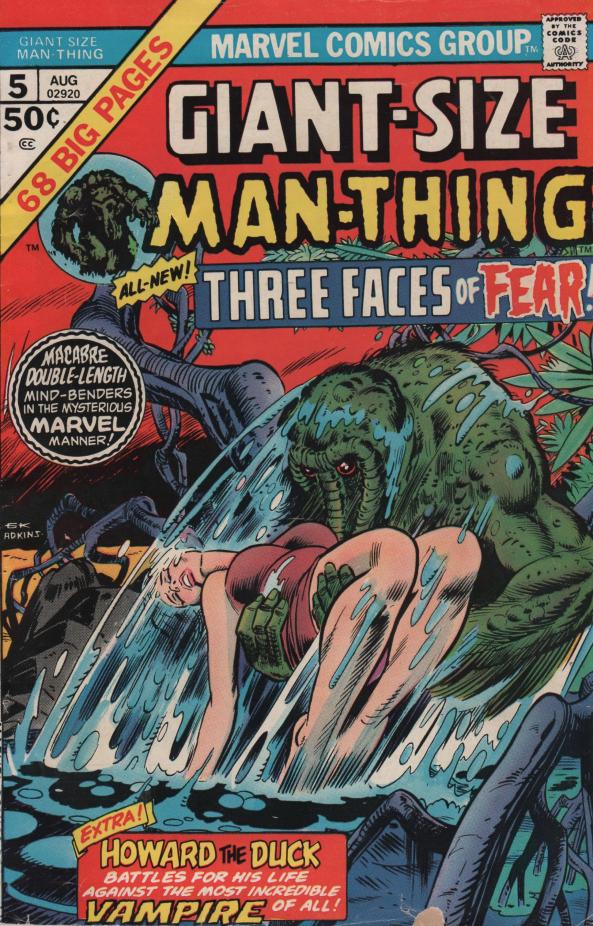 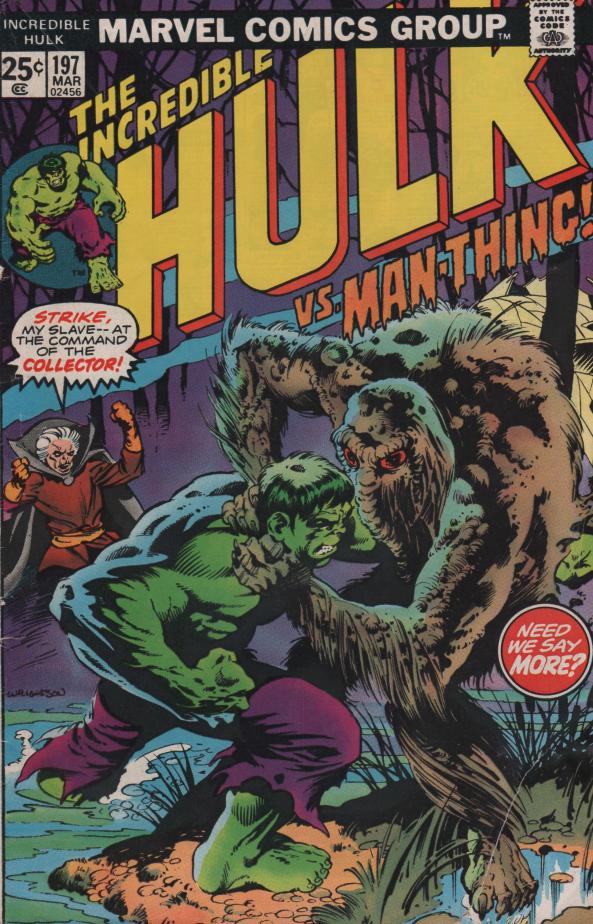 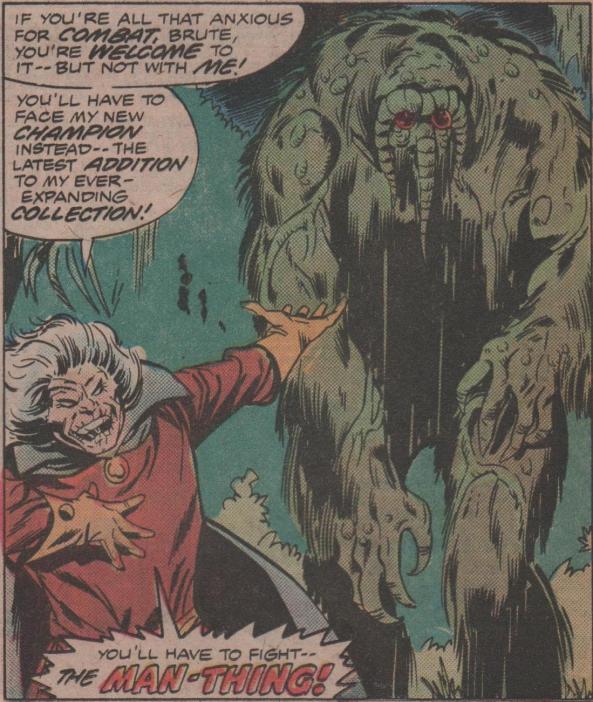 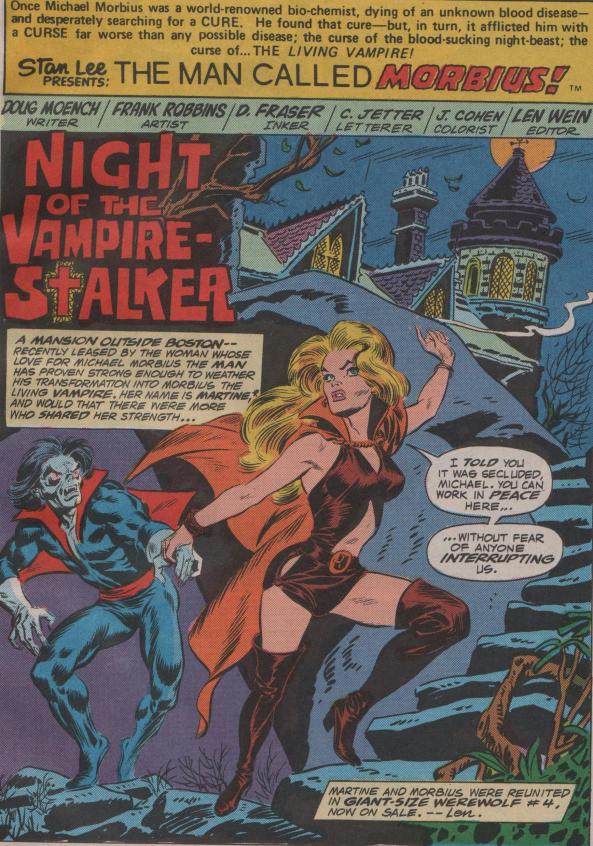