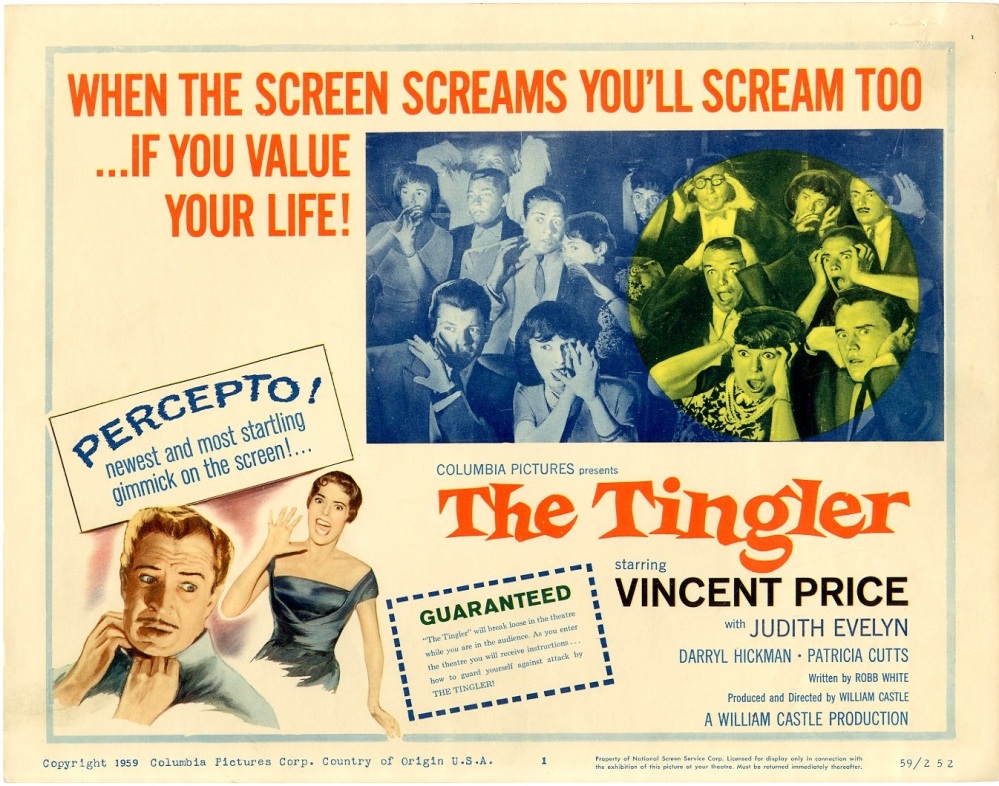 After a double-dip of Amicus films, I thought it had been too long since I’d visited a film starring one of my all time favorite actors, Vincent Price! I still have quite a few films of his that I want to spotlight, and this one is right at the top of the list, so I figured, why not? By this time in his career, Price had been working diligently and built up a good reputation. He had also begun to do almost nothing aside from horror films, which was a big deal for him, and would’ve been for any actor of that time (the genre was very well-respected back then).

I’d like to think that the relationship between William Castle and Price was one that helped vault both of their careers into the stratosphere, and it definitely helped the genre tremendously, and the industry. Castle was known for his cheaply made films that used a gimmick to get the audience to squeal, and more often than not, he accomplished that feat and more. OK, without further interruption, here we go…

The film begins with it’ Producer/Director, William Castle warning the viewers that he’s obligated to warn us that we (the viewers) will also be experiencing some of the sensations physically that the actors in the film did. He urges you to scream at the top of your lunges to help alleviate this sensation. The screen is then bombarded by floating heads that scream loudly, and the film begins.

We see a man in a jail cell, and he looks as though he’s about to go mad. He’s led from his cell to a room (execution), and then the scene switches to a room marked “autopsy” and we see Dr. Warren Chapin (Vincent Price), as he’s readying the room for another customer. A few minutes alter, and a body is rolled out of the room, and towards the autopsy room. Once the body arrives, Chapin begins his work. He notices that the dead man’s back is broken in two different places, and he theorizes that something other than electrocution did this. The other man in the room, Oliver Higgins (Philip Coolidge), tells Chapin that this man is a serial killer that also happens to be his wife’s brother. Chapin discusses his fascination with fear, and experimenting on people to figure out the effects from it. After the autopsy is over, Chapin gives Higgins a ride into town. They walk by a movie theater that Higgins and his wife own. Higgins uses sign language to tell his wife that he’s going to have a cup of coffee with Chapin at their apartment across the street. Eventually, Mrs. Higgins (Judith Evelyn), comes in and Oliver explains that she cannot speak or hear, so she must read lips or use sign language. As they talk, Chapin gets cut, and the mere sight of blood causes Martha to faint. later, Chapin tells Oliver that the reason she faints when she sees blood, is because she cannot scream and release the fear inside of her. Chapin, after Oliver asks him about the tingling sensation, dubs this condition “the Tingler.” Chapin leaves and heads for home. 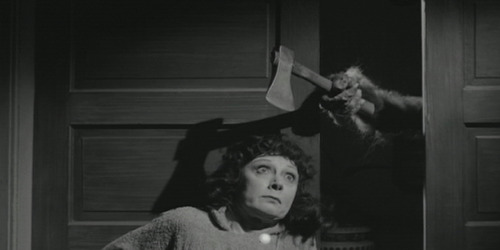 Over at his house, Chapin enters and is greeted by Lucy (Pamela Lincoln), and then his partner, David (Darryl Hickman). He tells David about his interesting experience today with the deaf-mute woman, and the two theorize about the effects of fear. Lucy gets mad and wants to leave, so David eventually complies. Later that night, Isabel (Patricia Cutts), Lucy’s older sister (and guardian), and apparently Chapin’s rich, estranged/ex-wife. Chapin and Isabel exchange quips, and then after Isabel gets cranky, Chapin pulls out a gun, and threatens her with a pistol. He leads her down to the lab, and threatens her. He demands that she leaves Lucy and David alone, and that gives half of her father’s fortune to Lucy. She tells him she wont do it, and lunges for the phone to call the police. Chapin shoots her, and while the body is still warm, he begins to experiment on her.

He quickly takes x-rays of her spine to see what causes it to break suddenly when someone is struck by a terrible fear. A moment later, she leaps up from the table and shrieks. He tells her it was only blanks in the gun, and that she passed out from the situation. Meanwhile, a cat that David procured for the experiment hops in the window and scares Isabel. He tells her that the cat was originally intended for the experiment but he thought she’d make a better volunteer. He also asks her is she’s seen this cat before in any of the local alleyways. She threatens him and gives him an ominous forecast for his future.

The following day David comes over to the lab, and shows him the x-rays of Isabel just as she was scared stiff. David is astounded by this find as they both see that there is indeed something in the spine just as someone is frightened. Chapin wants to push forward, but David is worried. Chapin convinces him to follow along, and the two try concoct a plan to extract a “tingler.” Chapin gives David the night off, and he and Lucy get the impression something is amiss.  They’re right, and they peek in on Chapin as he injects himself with some drugs (LSD?) to induce a fear in himself. 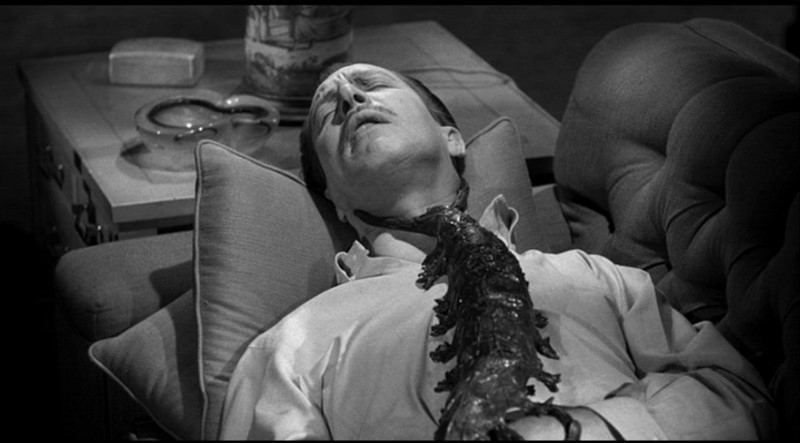 Chapin starts to go on a trip, and is trying to record all of this, but is having trouble keeping up with things the longer he’s under the influence. He starts to hallucinate that the walls are closing in on him, and he begins to panic. He feels like he can’t breathe, and sees the skeleton in his lab come after him. He tries to stop himself, but cannot, so he screams out. After he wakes, he tells David and Lucy that there isn’t anyway possible for someone to stop themselves from screaming from fear. He then gets a sinister idea, and leaves. David is worried he might experiment on Oliver’s wife, since she cannot scream.

Will Dr. Chapin resort to experimenting on Martha? Will he prove his theory about the Tingler? Check out this classic to find out!

This film is another good one from Castle and Price. House on Haunted Hill is better, mostly because of the cast, but also in plot. You can’t dismiss this one though, and I’m sure the gimmicks helped this one be even better when it was in the theaters. The special effects were pretty cool, especially the scene with the blood. Of course the “Tingler” by today’s standards would be judged as cheesy, but in all honesty, it looks as good comparatively speaking to the face-hugger in Aliens (1986).

The film is a must see for any Price fan, but also for anyone that loves old school cinema, especially of the thriller/horror variety. You do get a cool twist late in the film, and if you love House on haunted Hill, this one has some of the same elements to it that made that one great. Lets be honest for a minute, Price could carry any film, and his reputation was built on performances like this one!