In this, the final holiday post of 2019, I give to you one of the weirdest books ever! These strange stories all revolve around the holidays, but each one with a different cast of characters. The awesome cover is by Joe Jusko!

In the first odd tale (“Son of Santa“), we see a little person who convinces a total stranger to come with him on a flight to Tokyo. He agrees, but half way through the flight, the little guy hijacks the plane, and then forces the kid to jump out of the plane with him (using parachutes). They descend, and find an unusual building. It’s the HQ of none other than Santa Claus himself! The jolly old guy has been killed, frozen solid by someone called…the Anti-Claus! Written by Mark Gruenwald and art by Alan Kupperberg.

The second story is a bit of a parody of “It’s a Wonderful Life,” starring Howard the Duck (“Howard the Duck’s Christmas“)! As usual, it’s a crazy story, but not the best of the book for sure. Written by Steven Grant, art by Paul Smith.

Next is “Dr. Deth, Not to Mention Kip and Morty.” This one is by Larry Hama (script and layouts) and Bob Camp (pencils and inks). This one is very weird, and really not about Christmas except in a  very ancillary way.

In “Slay Bells,” we see what looks like a deranged, small man, acting like a boy to get close to Santa Claus’s around town so he can kill them! This one is super crazy, and violent. Story and art by Mike Carlin.

The next to last story is called “Santa Bites the Big Apple!” Santa arrives to give out presents in Manhattan, but finds out it isn’t easy doing anything in NYC! He gets thrown in the slammer, then must improvise on how to distribute his presents. Writing and art by Al Milgrom.

Lastly, we get a chapter in the life of Bucky Bizarre! An alien character that appeared in previous issues. He’s a humorous character that stumbles upon a girl selling matches on a street corner. The story takes place in the times of Charles Dickens, but this girl is not what you’d think! Written by Steve Skeates, art by Steve Smallwood. 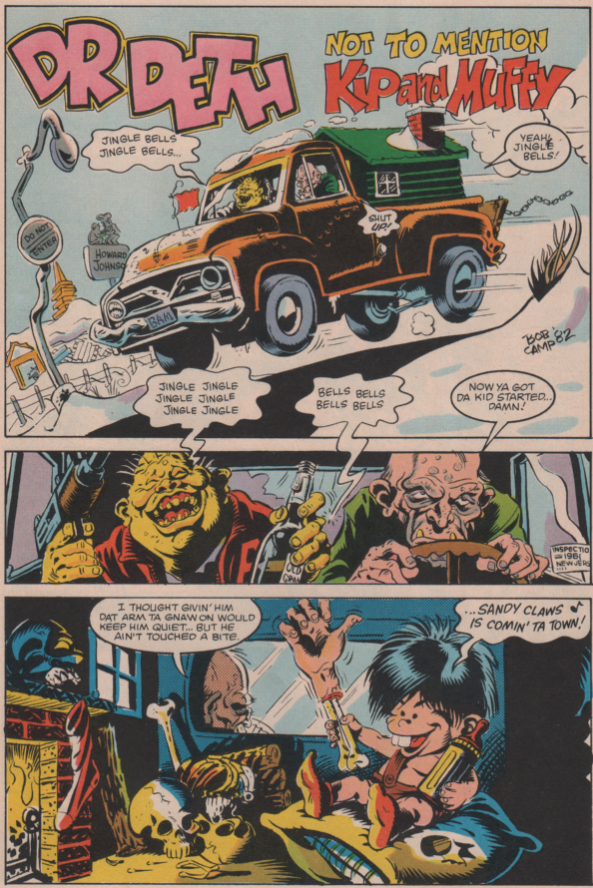 Merry Christmas to everyone out there! This week I’ll keep with the theme of anthology books, but with a holiday story! One of Marvel’s most beloved characters is definitely Ben Grimm. His kind heart and love for his friends is one of legend, his fights with Johnny notwithstanding! This story opens up with a gorgeous splash page that really sets the holiday mood. This wild tale involves the Puppet Master, Ben, and Alicia. You see, the Puppet Master is fresh out of prison, and the shenanigans must ensue. He convinces Alicia that he’s no longer evil, and then the two of them, plus The Thing head to his homeland (Transia) as a Christmas present from the FF. It doesn’t take long for the trio to get into trouble, as Bova and Modred the Mystic join the cast in this crazy holiday issue!

Written by Mark Gruenwald, art by Frank Springer (pencils and cover) and Chic Stone (inks), colors by George Roussos, letters by Michael Higgins, and edited by Jim Salicrup! This is a very wacky issue, but so much fun. The holiday backdrop is perfect for this story and for today’s post! Merry Christmas! 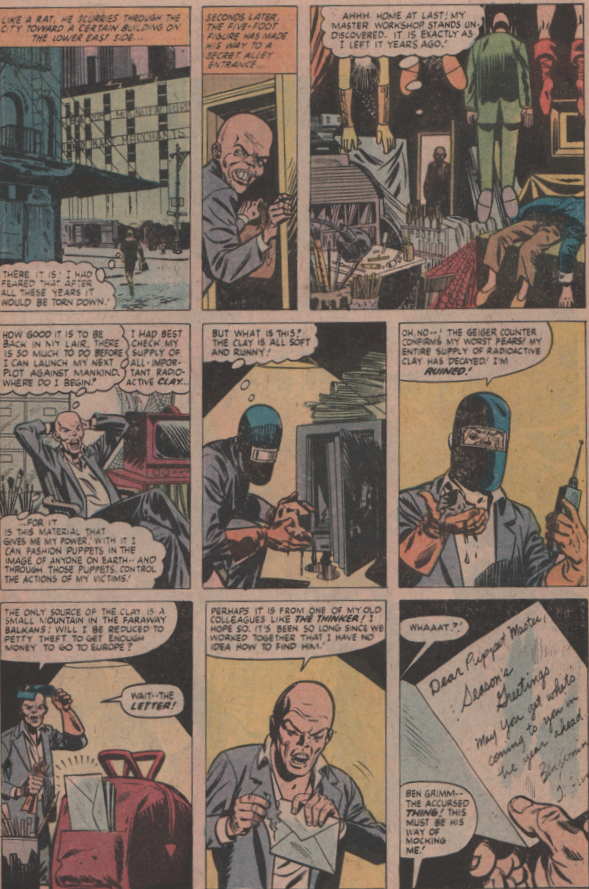 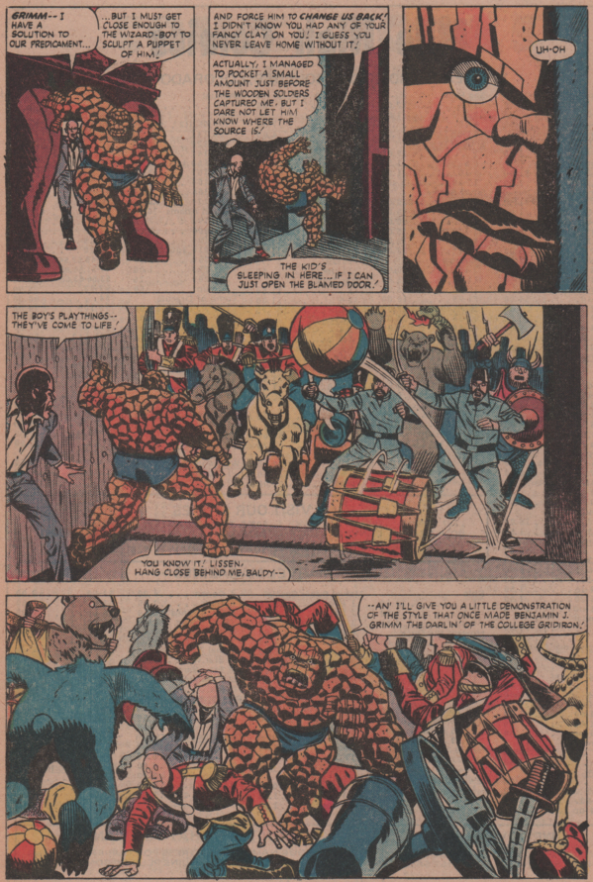 The next few issues of this great story saw a change in art, but not in tone for sure. You still get action supreme, and we really see what Ben Grim is made of as not just a superhero, but a man. We also get Bill Foster in action, Quasar showing off his abilities, and the mysterious Wundarr as well! After all is said and done, Wundarr fell a little flat, but Thundra was awesome! One thing to note about issue 56- the Thing and Thundra brawl, and as older readers know, this isn’t anything to get worked up over. In this day and age, you’ll be hard-pressed to see a brawl between a male and female characters in a mainstream book.

Props definitely need to be given to Mark Gruenwald and Ralph Macchio (writers). In only six issues, they utilize at least fifteen different characters in this setting (plus a flashback or two), and get more out of them than all their previous appearances combined! They do a great justice to Bill Foster especially. The artwork by George Pérez (pencils) and Gene Day (inks)(and one cover, 56, by John Byrne and Terry Austin), is very solid. I’m not very well versed in Day’s career, but Pérez is dynamite. Some of the pages of the issues I own, are a little muddy, and seem more like a printing issue than the artist’s not doing their job. Names like Bob Sharen and Carl Gafford (colors), Irv Watanabe and John Costanza (letters), and Jim Shooter (editor), round out the creative force behind this gem! 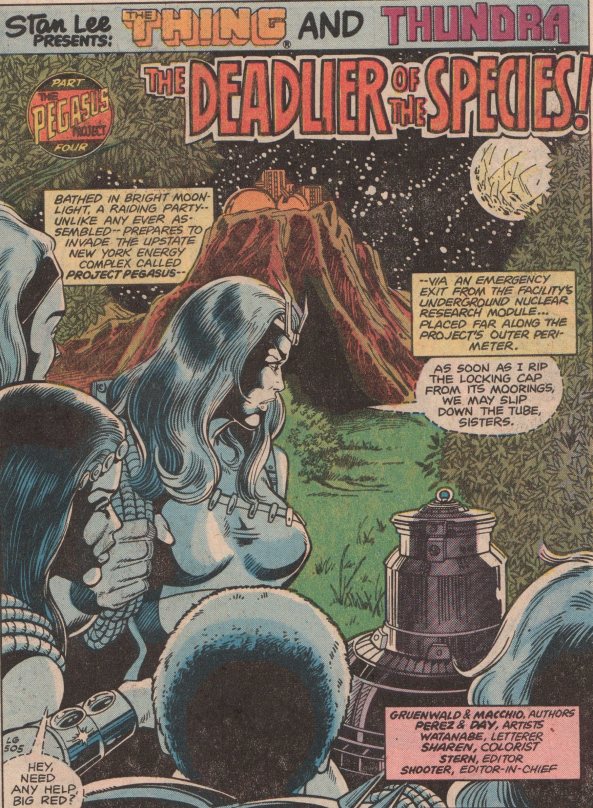 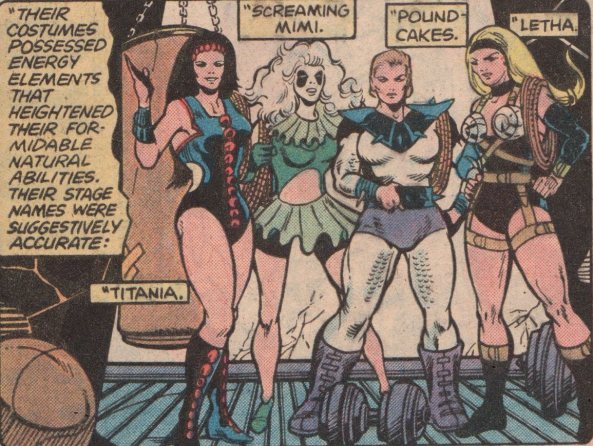 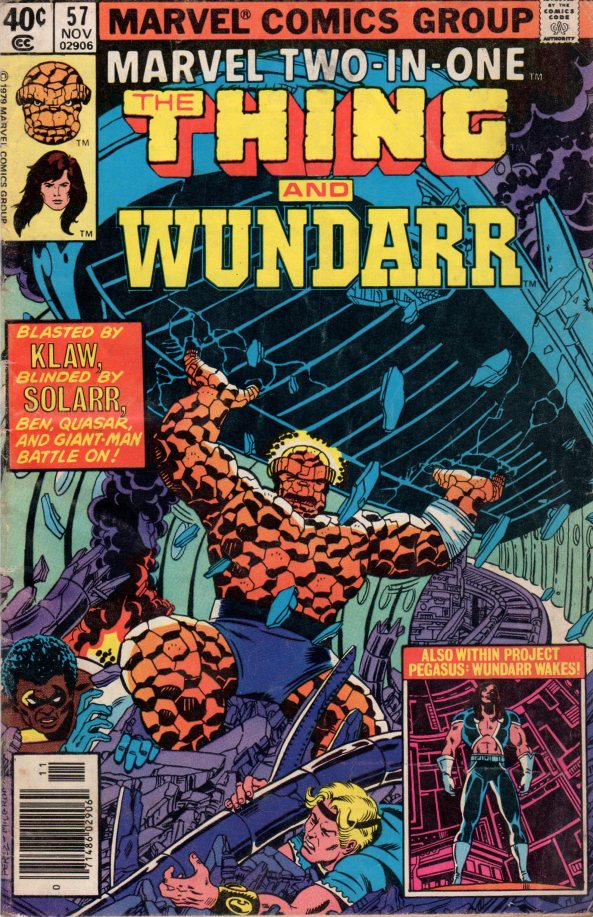 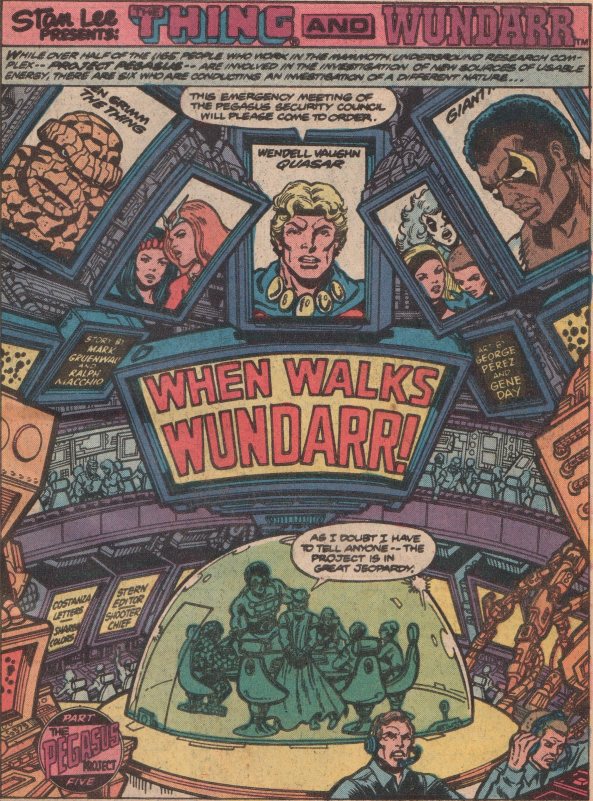 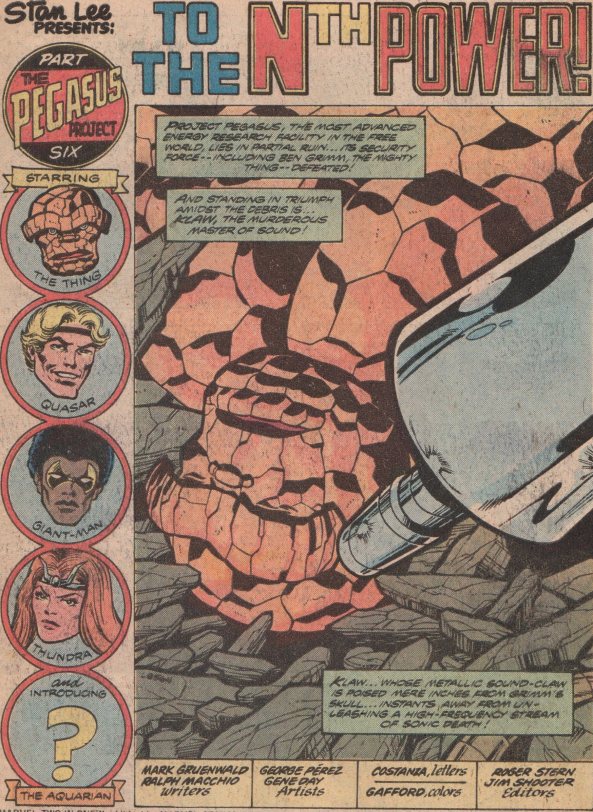 As of now, you can buy a deluxe hardcover of this great story, but back in the day, you had to grab the single issues. One of my favorite off-beat books of all time is most certainly Marvel Two-in-One! The title almost always featured Ben Grimm, and this Jack Kirby creation is one of the best characters to spring from his incredible mind. When thrown-in with another character, Grimm really shines. His personality is often repressed slightly when issue after issue of Fantastic Four he was portrayed as just muscle (with exception of an issue here and there). His sense of humor really shined in these stories, and solidified him as one of Marvel’s greatest characters.

One of the names synonymous with Marvel Comic’s history is Mark Gruenwald (writer). His days as an editor, writer, and overall continuity cop are nothing short of legendary. Along with Ralph Macchio (writer), these two men gave us an epic story that endures! If you need two men to render a story, you might as well get John Byrne (pencils) and Joe Sinnott (inks)! Toss in names like Bob Sharen (colors), John Costanza (letters), Diana Albers (letters), George Pérez (cover pencils to 55), and Roger Stern (editor),  and the dream team is set! 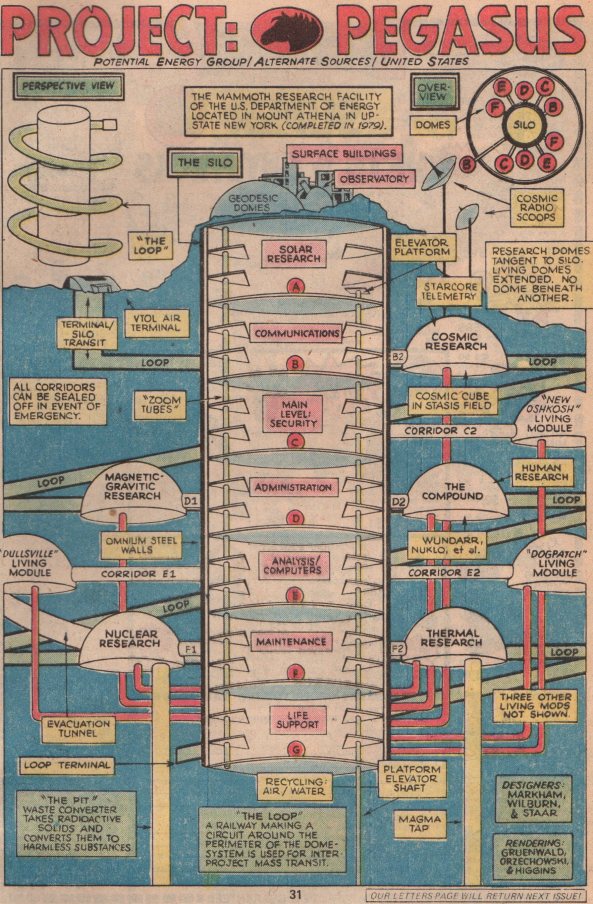 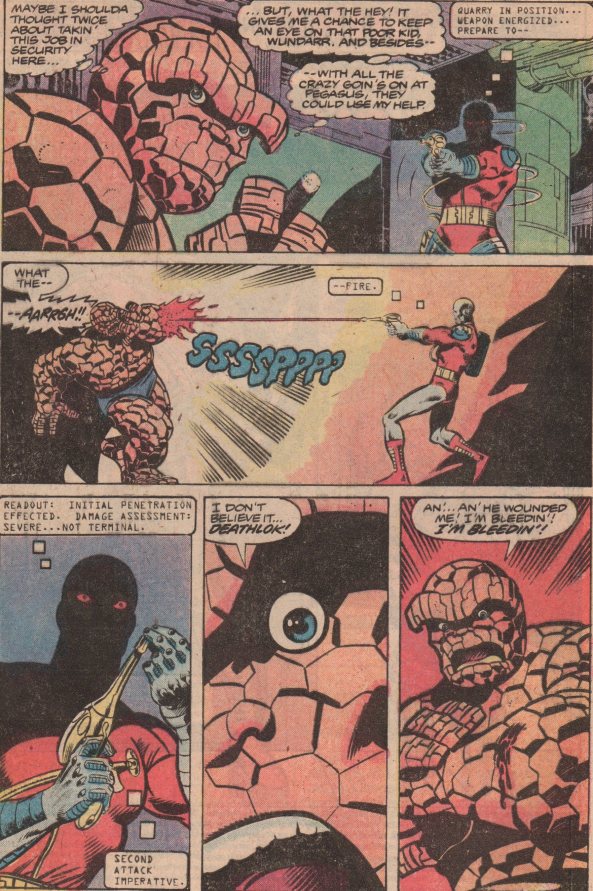 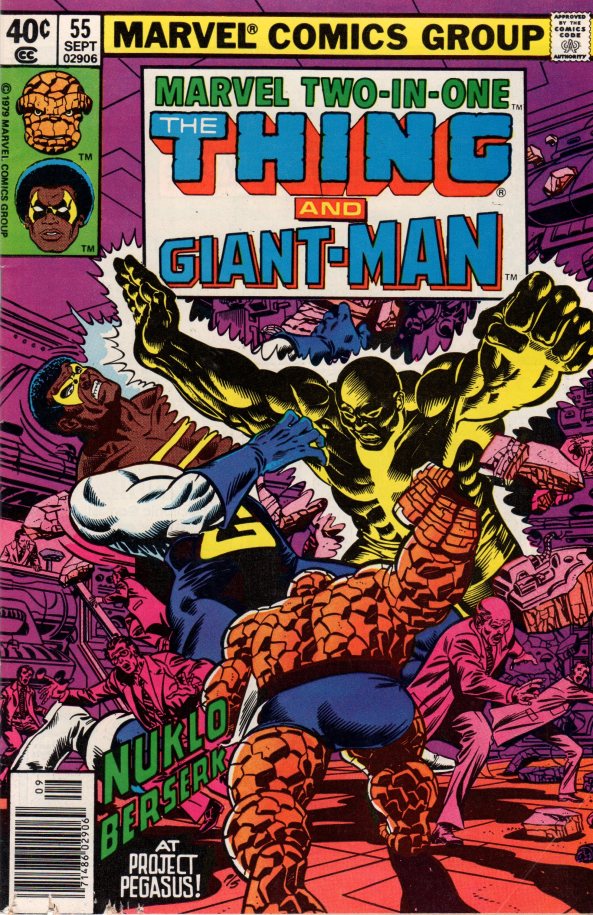 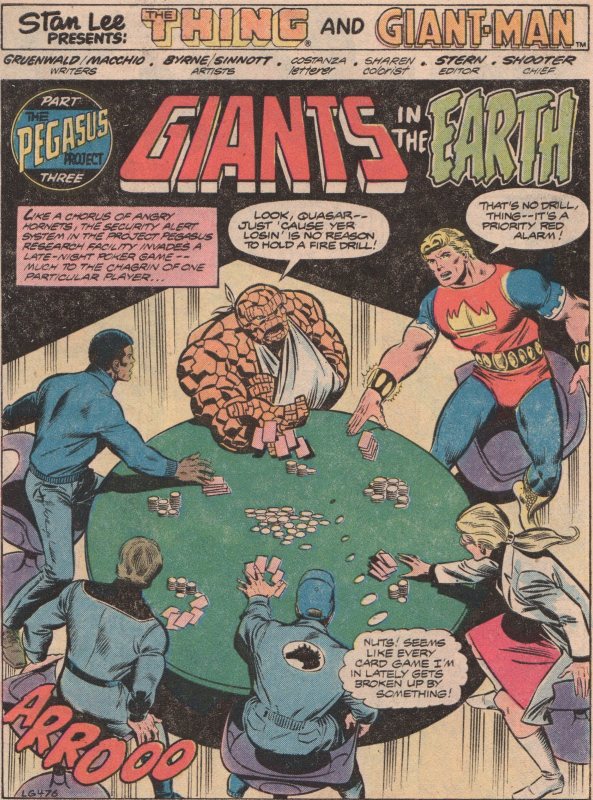 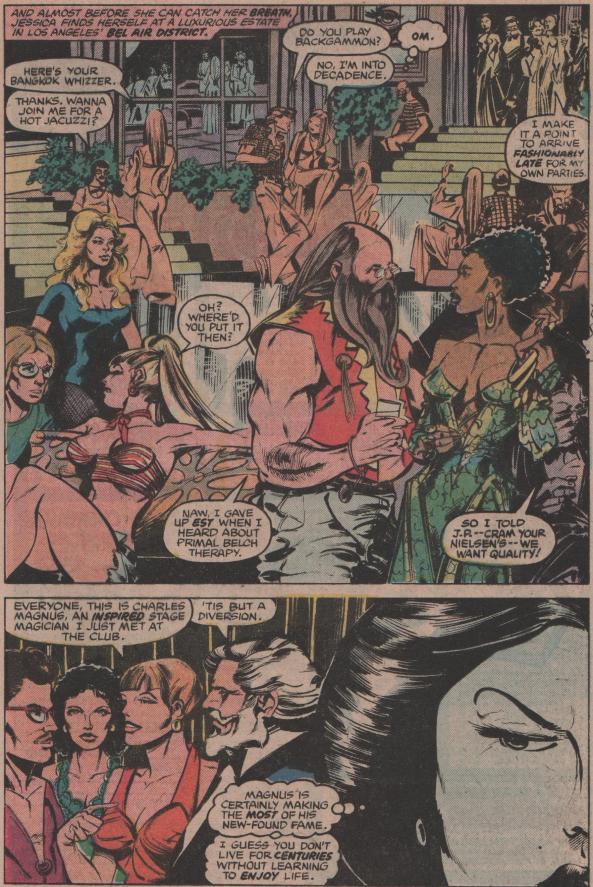 One of my all-time favorite characters, is none other than the Black Knight! I think it goes back to the Spider-Man and His Amazing Friends episode where he guest starred. It was a tale featuring the menace of Mordred! Or maybe it’s my love of Arthurian times. Either way, the Black Knight kicks butt! A flying horse, (Valinor), and the Ebony Blade, make him quite a formidable fighter, and he’s proven his worth many times over as a member of the Avengers, or just as a solo hero.

In this awesome issue, the Black Knight gets framed for murder, and he must solve the puzzle of who is committing these murders using a sword, and wearing a cape and armor! With Roy & Dann Thomas writing, Greg Capullo on pencils, Tom Dzon inking, Bob Sharen on colors, and Joe Rosen lettering. An excellent story and solid artwork from a young Capullo (cover by Steve Lightle)! Enjoy! 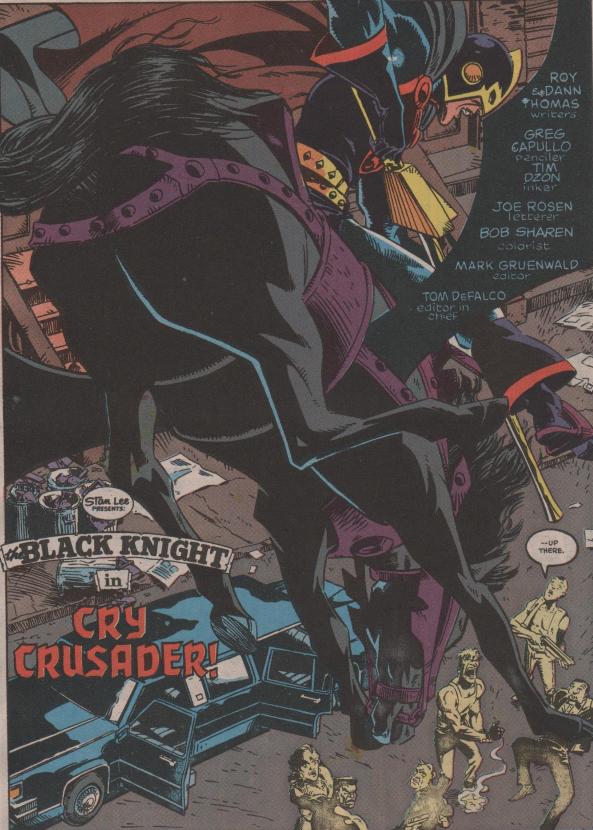 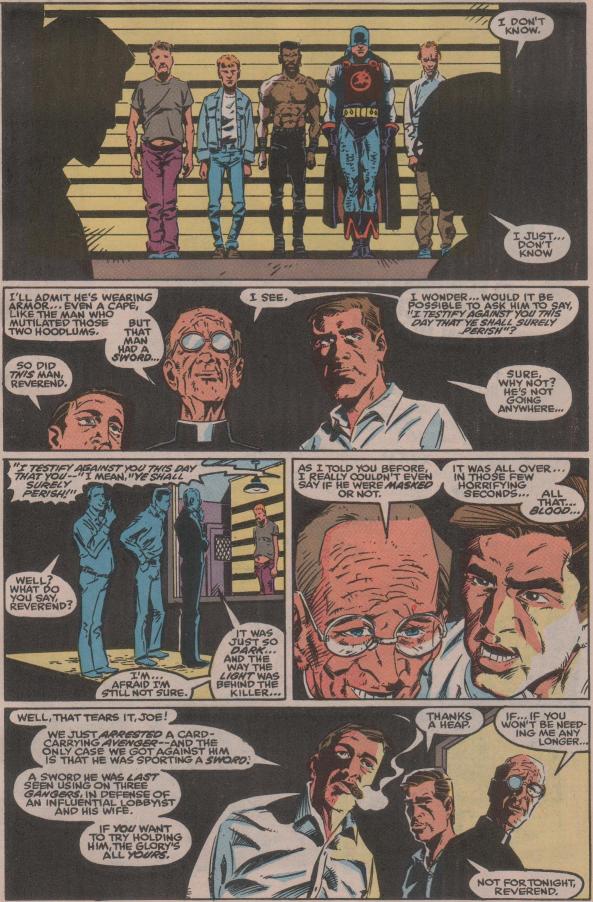 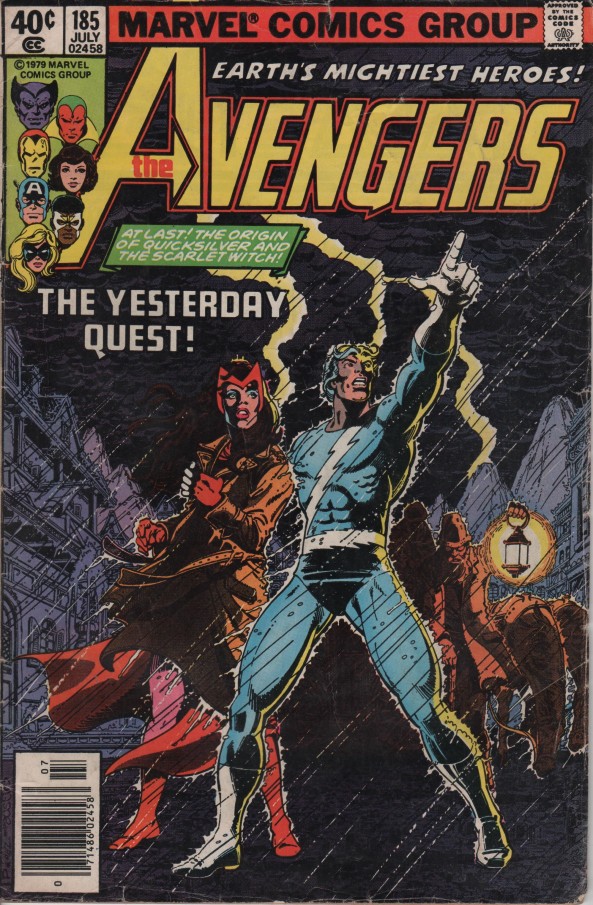 I don’t know if it’s possible to imagine a better comic book. Mark Gruenwald & Steven Grant (plot), David Michelinie (script), John Byrne (pencils), Dan Green (inks), Costanza (letters), and Slifer (colors). Oh, and did I forget to mention George Perez and Terry Austin on the cover? The story is one of my all time favorite Avengers stories. It digs into the past of Wanda & Pietro Maximoff (Scarlet Witch & Quicksilver), and also showcases Modred, Ch’Thon, and the High Evolutionary! Enjoy!