After reviewing some crazy films leading into Halloween, I felt it necessary to check out one of the all-time classics! The sci-fi genre never saw greater heights than in the 1950s. Such films as this one, Forbidden Planet, and others, set an amazingly high bar, that few films have ever even come close to. Why is that? I have no idea, other than to say that I believe as the years went by, filmmakers relied more and more on style than substance, but also because these early films had a charm to them. Even though they might be considered cheesy and have some dialogue that was shall we say interesting compared to more modern times, they always left you feeling exhilarated.

This movie is a must see for anyone that is a fan of classic cinema, regardless of it being sci-fi. It’s on Netflix right now, so if you have that, there’s no excuses. If not, I’m sure the big box stores have copies relatively cheap (check the $5 bins). Alright, let us commence with the film!

The film begins with a military base getting a reading from their radar that something is circling the Earth at an incredible speed. Radio stations around the world are broadcasting the news, and people look frightened. They make a weak attempt to calm the people down, but then suddenly, over Washington D.C., we see a flying saucer circling the area. People run in fear, and the UFO lands in an open field. Of course, the police show up, along with some bystanders, then finally the military. After two solid hours of nothing, the ship stirs, and a hatch opens. A figure (sort of humanoid) walks out, and informs them that they come in peace. As it comes down towards the crowd, everyone is on edge. The alien has a device of some kind, and it clicks, agitating one of the soldiers. He shoots the alien and blows the object out of its hand! Just then, a giant robot appears from inside the UFO, and you know the crap is gonna hit the fan. 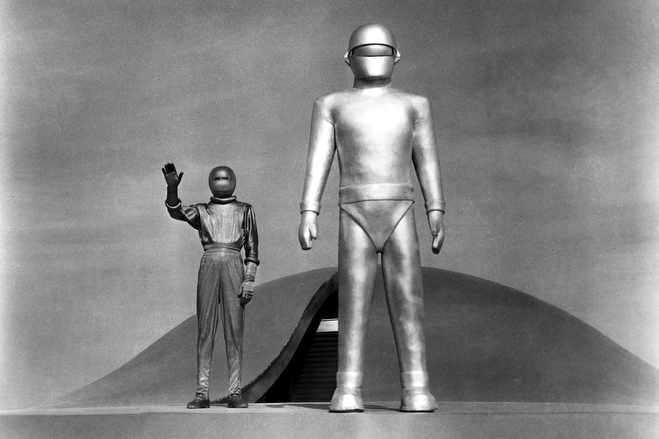 It marches towards the crowd, and the people run away screaming. A visor on the robot’s face opens, and a beam of energy shoots out at the weapons, disintegrating them totally. The soldiers can’t believe their eyes, and look like even they are about to panic. Just as it appears the robot is going to go off on them, the humanoid tells “Gort” to stop. He obeys, and then the humanoid tells the military that it was a gift for the President, and not a weapon. They take the humanoid to the VA for a check-up and then some questioning. The humanoid (Michael Rennie), who identifies himself as “Klaatu,” tells the officials that he has an urgent warning for the leaders of this world, and he demands that they assemble to listen to his words. They tell him it’s near impossible to get everyone together, but he tells them it would be in their best interest to make it happen.

Over at the UFO, the robot is being examined, but nothing they try is giving any answers. We then again see Mr. Harley (Frank Conroy), the Secretary to the President, as he informs Klaatu that the worlds leaders wont be meeting together any time soon. This angers him at first, but then he suggests that he gets out and spends some time among the people of Earth, to try to help him understand them better. Mr. Harley tells him that it’s not going to happen, and walks out. Klaatu just smirks. Later that evening, a nurse and a soldier bring some food to Klaatu, but he’s vanished.

The military begins to comb the area, searching for the alien. The radio has everyone in a panic. We then see Klaatu walking around a neighborhood, and that he’s stolen a bag, and some clothes from one of the officers at the hospital. He spots a sign that says “room for rent,” and investigates. He walks in and scares the beejeesus out of the people in the boarding house. He explains that he wants to rent the room, and the elderly woman is a little worried, but then comes around. 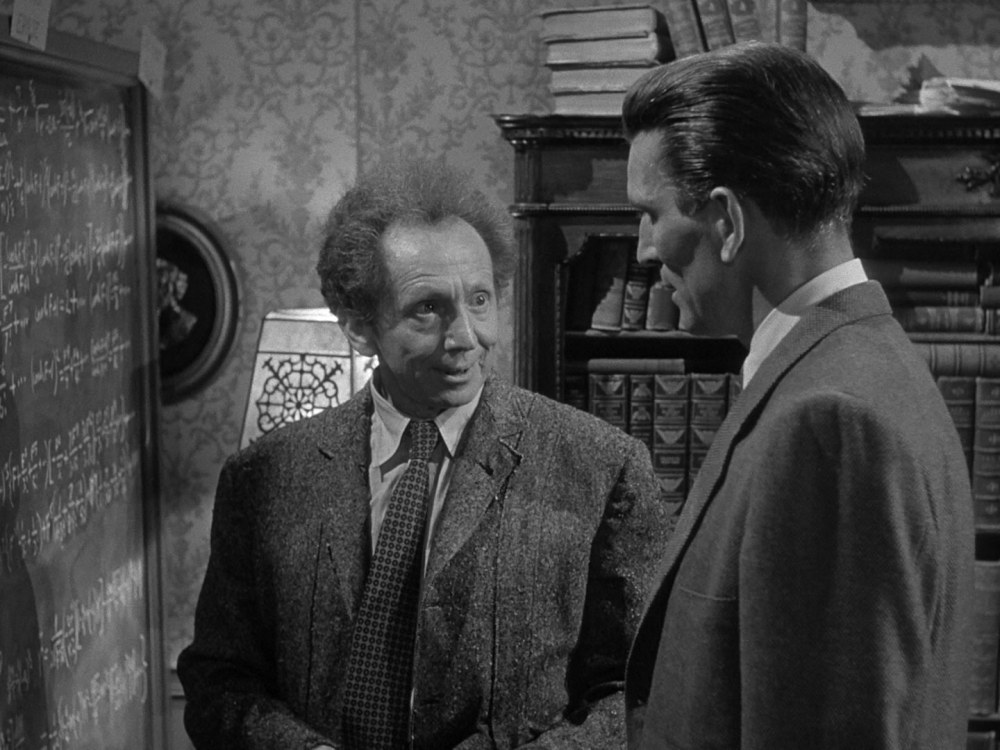 One of the boarders is Helen Benson (Patricia Neal), and she has a son, Bobby (Billy Gray). The youth thinks “Mr. Carpenter (Klaatu)” is a FBI agent, searching for the alien. After a couple of days, we see the hysteria growing, thanks in part to the media (imagine that). At the breakfast able, Helen tells the others (who are skeptical about the alien and his motives), that maybe it just wants peace. They kind of scoff at her, and then her boyfriend arrives. Tom Stephens (Hugh Marlowe) has a day planned for the two of them, but Helen doesn’t have anyone to watch Bobby. Mr. Carpenter volunteers, and at first, Helen seems unsure. Tom assures her it will be OK, and then they all part ways.

During the day, Bobby shows Mr. Carpenter around the city. They visit Arlington national Cemetery, and specifically the grave of Bobby’s father. The Lincoln Memorial is the next stop, and we see Mr. Carpenter’s reaction to the words inscribed on the memorial. He wishes he could talk to him instead of the people of today. Mr. Carpenter asks Bobby who the world’s greatest philosopher is, and he tells him that the smartest man is Professor Jacob Barnhardt (Sam Jaffe). Mr. Carpenter wants to meet him, but Bobby wants to go see the UFO first. It’s still a zoo around the spaceship, and Bobby has a ton of questions, most of which Mr. Carpenter answers. 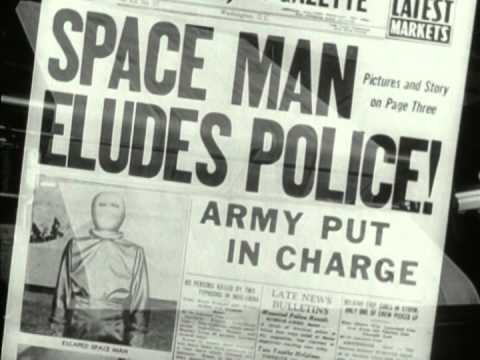 The two head over to the residence of Professor Barnhardt, but he’s not home. Mr.Carpenter sees a mathematical equation on a blackboard, and solves it for the professor. Just as he does, the professor’s secretary comes in. She admonishes them , and tells them to leave. Mr. Carpenter leaves his address for him, and later that evening a Federal Agent shows up and takes him to see the Professor. He reveals who he really is, and that if Earth doesn’t stop with their atomic program and their space program, the other planets will destroy Earth!

Can the professor get the people of Earth to listen? Or will Klaatu and Gort incinerate the planet!

I usually don’t care for morality plays in movies when they are this over-the-top, but honestly, this one doesn’t bother me at all. The lead character, played by Michael Rennie, is fantastic. His He really makes you believe that he’s an alien, and that we as people are heading down a destructive path. The relationship he has with the boy is absolutely incredible. The way he shows the boy what the really important things are in life regarding humanity, is spot on. Patricia Neal also does a fine job with her portrayal of the fearful mother.

The sets aren’t anything to crow about, but they really aren’t the point and couldn’t add anything regardless. The soundtrack is decent, and adds some tension to the film for sure. The special effects are quite crude, but for the time, they were just fine. I did like the way they showed the eye beams from Gort, destroying the tank. He turned it to ash in a matter of seconds, and for 1951 special effects, it looked pretty cool!

This film is required viewing for fans of the genre, plain and simple!