After a couple of wild black and white films, I thought it was high-time that two of my favorite horror film stalwarts were plunged back in the spotlight! As you well know, one of the most masterful horror film actors of all-time passed away recently, and next week, I’ll be showcasing a film starring Sir Christopher Lee, but for now, Vincent Price and Peter Cushing will share the stage. Both men had already built a huge catalog of films by this time, and really were still at the peak of their powers! So now, without further interruption, I give you, Madhouse… 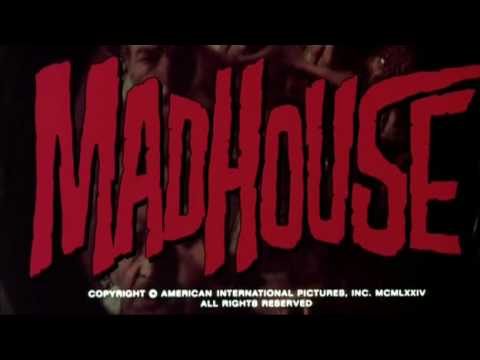 The film starts out with a room full of people watching a new movie that’s ready to hit the theaters (a flashback). It’s a cheesy horror flick starring a character named “Dr. Death (Vincent Price),” that shows the good doctor unleashing a monster in a well to kill a damsel in distress, while the townspeople wielding their torches and pitchforks attempt to stop him. A man then stops the film, and tells the guests about how Dr. Death killed many of his beautiful co-stars in different ways, but now, he’s marrying his latest co-star, Ellen Mason (Julie Crosthwait). He (Paul Toombes) introduces the writer, Herbert Flay (Peter Cushing), and gives him full credit for his contributions. As he introduces his bride to be, one of his old flames (and old co-stars), Faye Carstairs (Adrienne Corri) approaches him, visibly upset, and gives them her two cents. Shortly thereafter, a man, Oliver Quayle (Robert Quarry), introduces himself to Toombes, and remarks about how his new bride used to make adult films before he knew her. Toombes is quite upset with him, and his fiancé, and she runs off, embarrassed by the situation. She runs upstairs as Herbert tries to comfort Toombes. After crying for a minute or so, Ellen is brutally murdered.

Paul awakens after having fallen asleep apparently, and heads upstairs to apologize to Ellen. As he enters her room, her head falls off, as she’s been decapitated! Paul scrams, then the story fades to a hospital room, where he’s been injected with some kind of drugs, and being questioned about the murder. He keeps insisting that he can’t remember what happened. We next see a shot of London (present day), as Paul has completed a rehab program (after a nervous breakdown), and his old nemesis, Oliver Quayle, is now a big-time editor of a newspaper, and he’s telling his underlings the story of Toombes’ history, and how he’s planning an exposé on his life. 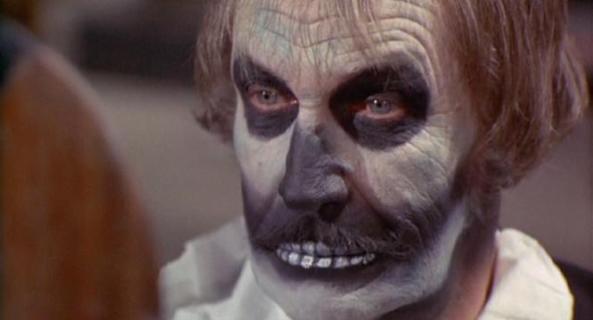 Next, we see Toombes being awakened by a gorgeous woman, Elizabeth Peters (Linda Hayden). She’s a young actress that wants a break, but Toombes tells her to hit the road. Toombes is on a ship coming to London (he was previously in Hollywood, apparently), and is greeted by Julia Wilson, one of Quayle’s stooges. She takes him to the home of his life-long friend, Herbert Flay, and the two then reminisce about old times, and how the two will now be working on a television show together. Herbert tells Paul that he’s now become a successful actor, but that he wants to work with Paul again. Paul is terrified to revive the character again, as he thinks it’s bad luck. They then watch one of the Dr. Death films together, but as it drones on, Herbert creeps out of the room, and Paul seems to be going into a trance. 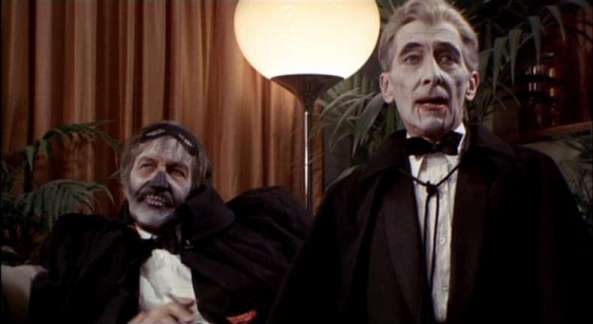 Outside the house, the girl from the ship, Elizabeth, is prowling around, and eventually makes her way into the house. She calls out to Paul, but gets no answer. She heads back outside, and sees a figure walking through the garden. She calls out but gets no response. As she follows the figure further and further away, she begins to realize she might be being led away intentionally. Just as she’s ready to give up, the shadowy figure pops out of nowhere and shoves a pitchfork into her neck! Back inside, Paul awakens, after seemingly falling asleep on the couch. He lights a candle, and heads out to find Herbert. He can hear someone talking, and investigates. He finds a phonograph in the basement, along with a glass enclosure full of Tarantulas. Before he can even move, he’s accosted by a woman (image below). At first he doesn’t recognize her, as she’s terribly disfigured, and seems to have had a mental breakdown. Eventually though, he recognizes that it’s Faye (from the opening scene). 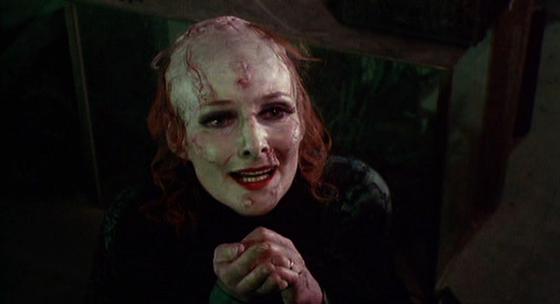 The following day, two boys are fishing, and discover the corpse of Elizabeth. The police are baffled but see a pattern with these two killings. Both were done in the same fashion as portrayed in two of the Dr. Death films. Of course, they immediately wonder where Paul Toombes is, but he isn’t a suspect yet. Over at the house, Paul asks Herbert why he never told him that he ended up marrying Faye. As they meet up with Oliver Quayle, and then later they begin to film the first scene. Toombes isn’t thrilled but is doing Herbert a favor, so he endures the hardship. He’s also not excited about finding out that he’ll have a pretty assistant, something he never had in any of his films. Toombes yells at her for not following his lead, and they call it a day.

later that evening, Quayle is throwing a costume party for the launch of the filming, and again, Toombes is less than excited. Herbert attempts to change his mood, but Toombes is anything but happy. He then has a run in with is co-star, but tells her off. Quayle then shows some old film clips of Toombes work (actually films that Price had made, and not “Dr. Death” films), and everyone sits down for the show. Everyone except his new co-star, that is, as she’s gone upstairs to check out some of the props that Quayle has collected over the years. In mere moments, she’s murdered, and a few minutes later, Quayle’s assistant, Julia, finds the girl hanging by her neck, dead. Toombes heads back to Herbert’s home, packs his bags, and attempts to leave. He’s stopped by the police, and they bring him in for questioning. 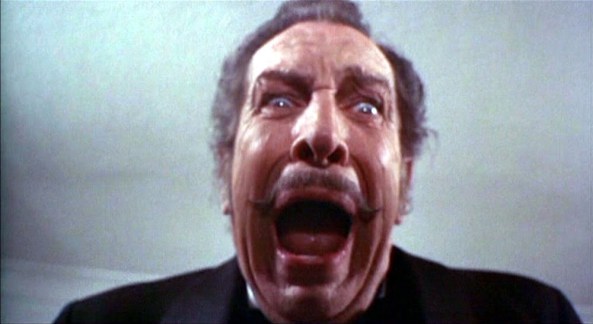 Is Paul Toombes consciously or unconsciously acting out murders from his movies? Or is someone else trying to drive him insane? Check out this classic to find the answers!

I wouldn’t consider this film in my personal top few films in the career of Vincent Price or Peter Cushing, but don’t be fooled, it’s definitely worth a watch. Price gives a solid performance, as to be expected from a consummate pro like him, and so does Cushing. The rest of the cast isn’t on their level, but then again, not many are. Robert Quarry plays a good, sleazy producer, and Linda Hayden (only a small part, image below), is very easy on the eyes.

The sets were good, and the soundtrack was good enough to help move things along here and there. There were a couple of parts that bogged down the film slightly, but nothing to terrible. The cops being portrayed as a couple of boobs is a bit of a tired trope, and really didn’t help. One cool angle was the scene where they were showing some of Paul’s work, and it actually showed some of the films Price did during that era, with fellow horror legends Boris Karloff and Basil Rathbone.

Check this one out if for nothing than to see these two legends, as their careers were certainly winding down (compared to before this time), but not over yet!