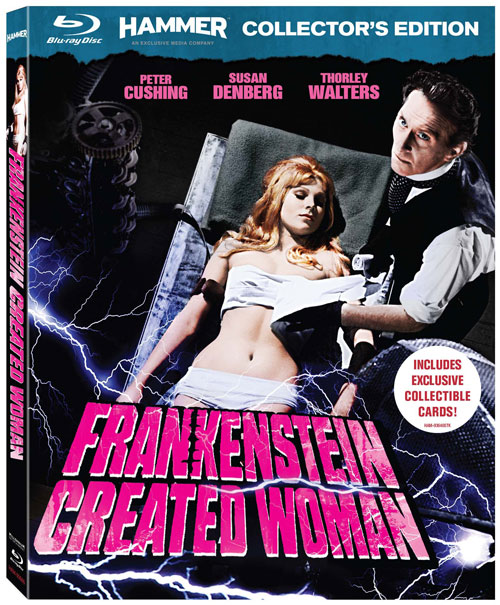 OK, listen, don’t let this title or some reviews fool you. This film is pretty good! It isn’t your typical Frankenstein franchise film, but it does have three things going for it. Susan Denberg, Susan Denberg, and Susan Denberg. Alright, that was my attempt at humor. The lovely, blond bombshell is one of the reasons, but the horror icon himself, Peter Cushing, is certainly one of the others! The last reason is simple. Any time you have multiple decapitations in a movie, you’re on the right track! This was one of the last films produced at the famous Bray Studios, a legendary site for Hammer Studios.

The film begins with a rough-looking fellow, as he’s being led to the guillotine. Just about the time when he’s to be killed, a boy, his son actually, is spotted in the nearby forest. It’s the son of the gentleman that’s about to be executed. The priest chases Hans away for the moment, and the convict tells the men to do the deed. Just as the blade is about to fall, the boy appears out of the trees, and watches his father die.

Fast forward to a few years later, and Doctor Hertz (Thorley Walters) is being assisted by a now grown up Hans. They quickly retrieve a body from a freezer, and we now see that the body is that of Baron Frankenstein! He’s been on ice for one hour, and the two men use the arcane machinery to revive the Baron. After a scuffle at a local cafe’, Hans is arrested for his part in the melee. He’s released, and goes back to the cafe’ owners home, where the owners daughter, Christina is readying for bed. She’s disfigured, and has a bad limp, but Hans loves her, and she loves him, too. They make love, and then Hans goes home for the night. Back at the cafe’, the gentlemen that were involved in the brawl with Hans earlier, have returned to the establishment after closing, to pillage the liquor. The owner returns to the cafe’ after realizing he forgot his keys there, and is summarily assaulted by the youths.

The next day, Hans is walking by the cafe’, and is arrested by the police under suspicion of murder. A trial is quickly thrown together, and Hans is sentenced to the guillotine at dawn. Baron Frankenstein knows this is his opportunity for a fresh corpse, so he makes the arrangements with Dr. Hertz to “obtain” the body. The Baron then tells Dr. Hertz that they’ll use the machinery to capture the soul of Hans, then put it into another body. Preferably one with a head. The next morning, Hans is beheaded, and this time, Christina is passing by, and witnesses it! The event drives her mad, and she runs into the forest, and throws herself into a nearby river. Dr. Hertz and the Baron get both bodies, and pull the switcheroo. Now, Hans’ soul resides inside Christina’s body, and her deformities have now been fixed by the two good doctors.

At first, Christina seems fine, but when the Baron shows her the guillotine where Hans was killed, it ignites memories from him, of that fateful day when his father was killed, years before. She begins to have nightmares as well, and after waking up from one, she decides it’s time for a little revenge against the hooligans that wronged Hans from the wrongful murder charges. The first to feel her wrath, is Anton. She dresses up quite nicely, and hangs out on the corner by the cafe’ where Anton and his cronies hang out. As he leaves the establishment, she picks him up, and then they go to the abandoned house where Christina used to live. She goes into the backroom to change, and then calls out to Anton, but with the voice of Hans. The next thing we see, is the guillotine coming down, signifying Anton’s demise.

The next night, Karl and Johann are drinking away their troubles at the cafe’, and discussing Anton’s death. Johann then leaves, and Christina comes into the cafe’. She charms Karl into having a little “action”, but then Karl spills wine on her dress. She excuses herself into the washroom to clean it, and moments later, Karl hears the voice of Hans calling to him. Christina emerges with a meat cleaver, and we next see a shot of her chopping wood the following morning (obviously, Karl is dead). Some villagers then accost the home of the Baron and Dr. Hertz, and demand to see them about the recent murders. The Baron tells them to dig up the body of Hans, and they do just that next. The grave is opened, and the body is still there, but the head is missing! 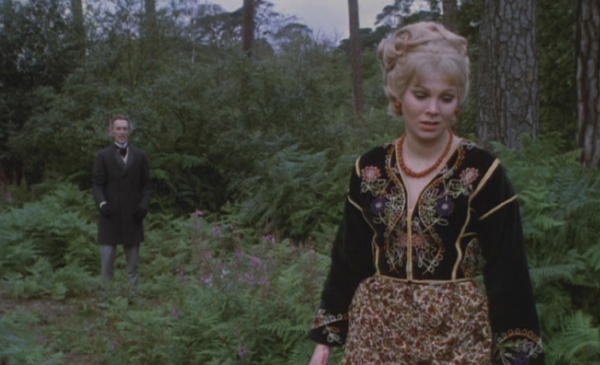 The next scene is Christina, in her bedroom, having a conversation with the head of Hans (she’s planted it on her mirror). We hear the voice of Hans, instructing her to kill Johann. As Johann is trying to make a speedy escape out-of-town, and as he just reaches the coach heading out of the village. He notices a pretty girl in the corner, and she offers him a drink. The coach breaks down, and the two decide to have a picnic in the forest. As Johann is laying in her lap, she pulls a knife out of the basket, and stabs him violently. We notice the head of Hans is in her hat box!

I wont spoil the end of the film, as it’s not my style, but rest assured, you get your monies worth from this movie. It was a change of pace for the Frankenstein series, as this one dealt more with the spirit, than the body. Also, the aspect of a woman committing the murders, and not a man was a switch from the normal routine. Cushing is his normal, brilliant self in the film, and that is to be expected. Susan Denberg did do a fine job on top of being fantastic eye candy. Her performance, especially once she was resurrected, was very good in my humble opinion. Thorley Walters  character (Dr. Hertz) did a fine job of complimenting Cushing, and his child-like affection for Christina was definitely a great addition to the script.

Definitely look this one up (currently free on YouTube) if you’re a fan of Hammer or old school horror movies in general. It’s one of those movies that doesn’t get a lot of play, or great reviews, but trust me, you’ll enjoy it! See you next week!