After more than a month of nothing but DC comics, I figured it was time to give a Marvel book some love. This one came into my possession not too long ago, and of course it had to eventually, being a Man-Thing appearance! Of course, by this time Manny’s first solo book had been cancelled, but maybe his fans were screaming for more! And look at this cover by Rich Buckler and Frank Giacoia!

As with any story written by Steve Gerber, it starts out bizarre, then settles in and stays that way until its completion. Most people might not enjoy that, and argue that his storytelling wasn’t coherent or anything more than nonsensical. But, if you dig deeper, you’ll see his feelings, thoughts, and emotions on paper, along with his opinions on social issues. When he wrote Man-Thing, it seemed easy for him to write this non-speaking character. Of course other characters did the heavy lifting with the dialogue, but Gerber still maintained having the Man-Thing be either the focus or at least a very relevant part of the story.

In this story, we get to see not only the macabre Man-Thing, but the playboy Tony Stark, and the villainous Molecule Man! Without going into a heavy amount of detail about this insane story, Tony Stark is in the Everglades to possibly finance a project (the rebuilding of Omegaville). We then see some kids playing in the swamp, and one them falls victim to the essence of the Molecule Man! A battle between Iron Man and Man-Thing breaks out, then one with all three characters ensues. Cameos by Reed Richards, the Vision, Richard Rory, and an animated skeleton all await inside this glorious book!

Some might like me to stop singing the praises of Steve Gerber (writer), but I can’t. The man had a knack for writing bizarre stories that were very good (if not excellent). The interior art by Sal Buscema (pencils) and Jack Abel (inks), is superb. Irv Watanabe on letters, Janice Cohen colors, and Marv Wolfman editing, round out the creative team in this fun annual. In late 1978, David Michelinie and Bob Layton began their collaboration on the title Iron Man. The stories they created together were very good, and both men deserve kudos for that accomplishment. This particular issue occurred a little while after the ending of “Demon in a Bottle” but the effects of that story were still in play. Tony/Iron Man will have to face off against one of his former lovers, but also a woman who is one of his deadliest enemies, Madame Masque!

As I said previously, Michelinie (co-plotter, scripter) and Layton (co-plotter, pencils, inks) had a solid run on this title, even during the times that aren’t as widely known. After their run, things kind of broke down a bit, and the title began to descend into relative obscurity (no offense to Denny O’Neil). The letters were provided by a familiar name, and John Costanza could always be counted on to deliver. Curiously, the colors are by writer/artist, Ed Hannigan, who’s typically not known for his coloring jobs (many more pencil/ink job and of course, writing). The editor was another Marvel mainstay of the times in Jim Salicrup! 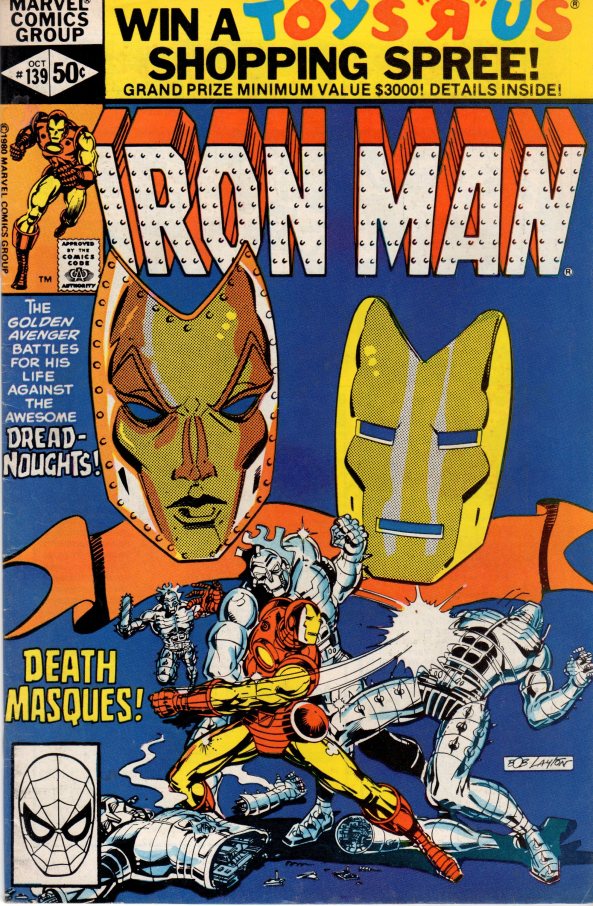 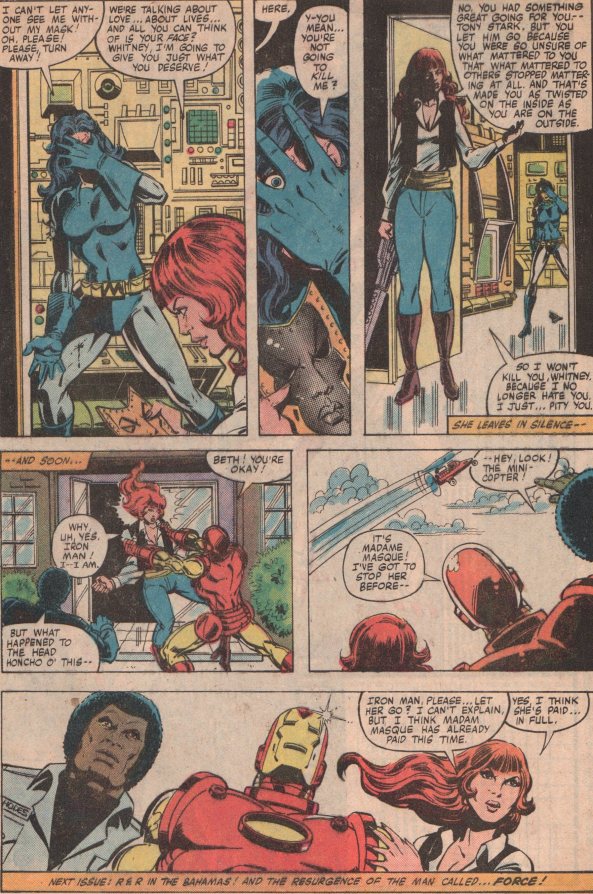