It has been too long since I last blogged about a horror comic! Last week’s awesome post aside (click here for my contribution to Super Blog Team Up), lately I’ve been all over the spectrum on my posts, as in, whatever hits me as worthy at that very moment. Some would say they’re ridiculous and not top tier like certain books that have beloved runs even 40+ years or more later. But I feel like all comics have worth, obviously some more than others, and there’s nothing wrong with liking or not liking any comic. So even when I blog about some lesser known comic, rest assured its got at least some redeeming value. Now, let the horror commence!

This week’s post is solid, and has some really good material from the Golden Age. Some pre-code even! Five stories of madness are inside this one, and solid creators are behind them. The first story (“The Graves that Moved“) starts out in a graveyard as we see caskets popping out of the ground and killing an old guy! Very eerie and sets a good tone for the rest of the book. Art by Jim Mooney (no other credits given).

The second story is called “Out of the Swamps!” This one has a scientist, gangsters, and talking Lemurs…yep. A very bizarre story indeed, but with very good art by Dick Ayers!

Next, we get “Dead End” and we see a man telling the readers that he’s killed himself and doesn’t really exist anymore. It seems like they were going for a real nutty vibe in this one as well, and they achieved that with flying colors. script by Burt Frohman, Art by Tom Gill.

The fourth tale is called “Last Seen Climbing a Ladder!” The story revolves around a scientist that thinks he can build a ladder from Earth to an asteroid. Yes, you read that correctly. He actually succeeds but has plans of his own afterward! Art by Vic Carrabotta.

Last but not least, we get “Superstition.” It shows a penal colony on Guiana, and how the prisoners have escaped. They were helped by some of the natives, but when the prisoners demand to be taken off of the island, things get dicey. You see, the natives have a superstition and don’t want to leave the island. They have a good reason, and the prisoners find out why, but it’s too late! Art by Syd Shores!

All of these stories are kicked off by a cover by none other than Golden Age artist, Carl Burgos (you may have heard of him), but with heavy alterations by John Romita. 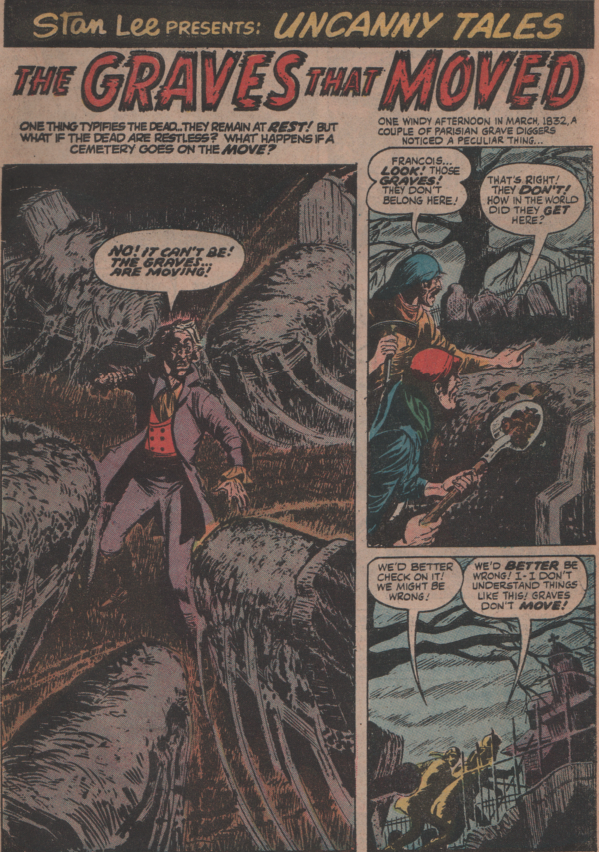 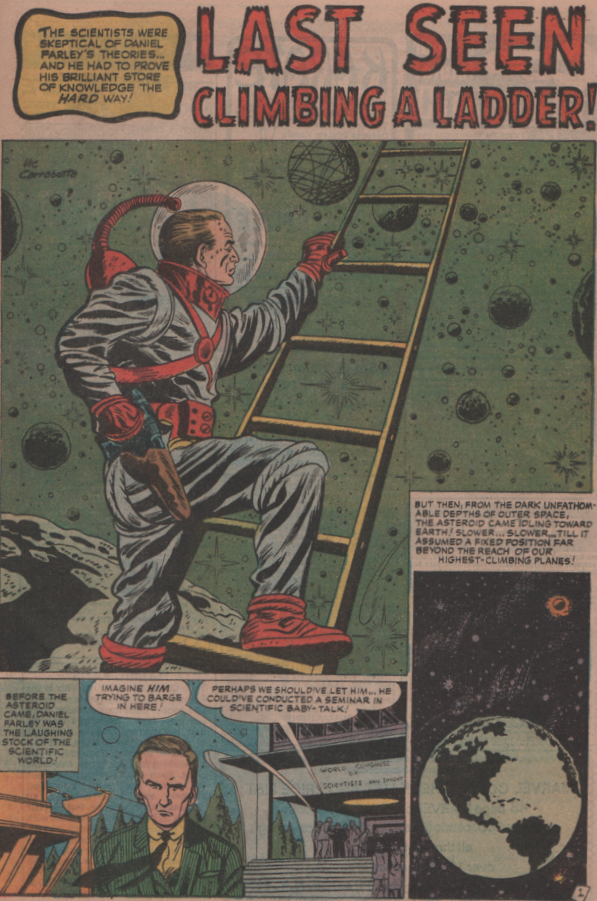