It’s been a little while since I had a blog post showing how much fun the resurgence of horror material was in the Bronze Age for Marvel Comics. Anthology titles were all over the place, but were where a lot of good material can be found for either reprint material or all new stories. Some of the books had incredible stories with big time writers getting credit. Case in point, some of the issues have names such as Robert Bloch (Psycho, The Skull, Asylum), H.P. Lovecraft (The Call of Cthulhu, At the Mountains of Madness, The Shadow Over Innsmouth), and Robert E. Howard (Conan, Red Sonja, Kull). The men scripting these stories/adaptations were no slouches either, but we’ll get to them in a minute.

The first tale in this issue is called “The Shadow from the Steeple!,” and this story has elements from stories by Bloch, and Lovecraft (there were three stories that were parts made by Bloch and Lovecraft). A grimoire, a cult, a mysterious, ancient jewel, and even more ancient evil, named Nyarlathotep! Ron Goulart (script), Rich Buckler and Frank Giacoia (art), George Roussos (colors) and Denise Wohl (letters).

The next story is one that’s been done before, as a young man marries a wealthy nut older woman in hopes of inheriting a large sum of money. There is one room in the home that the help won’t allow the husband access. The husband thinks that the money/jewels etc., is in this room. One day he decides to suffocate his wife, and use a mallet to gain entry to the locked room. What he finds inside isn’t wealth, but his doom. Apparently, there is a curse on the family that the woman will grow old unless she procures a sacrifice for the evil within! Written by Kevin Frost, art by Win Mortimer and Ernie Chan, and letters by Denise Wohl.

The last story is quite a treat, as a mad scientist that has been experimenting with transplants wants to be left alone. We see that he has a pack of mad dogs patrolling his estate, to keep out unwanted visitors. The first thing our eyes see is the pack of dogs kill an insurance salesman that was just trying to do his job. The scientist’s wife is shocked at far gone his sense of right and wrong has gone, so she picks up the phone to dial the police. He hits her over the head with a shovel, knocking her out. After some thought, he removes her brain, and replaces it with a dogs brain! Let’s just say in the end, the mad scientist ends up dog-meat! Story/script by John Albano and Marv Wolfman, art by Paul Reinman (pencils) with Mike Esposito and George Roussos (inks), and Artie Simek (on letters).

Overall a very good book with a great cover by Gil Kane and Frank Giacoia! 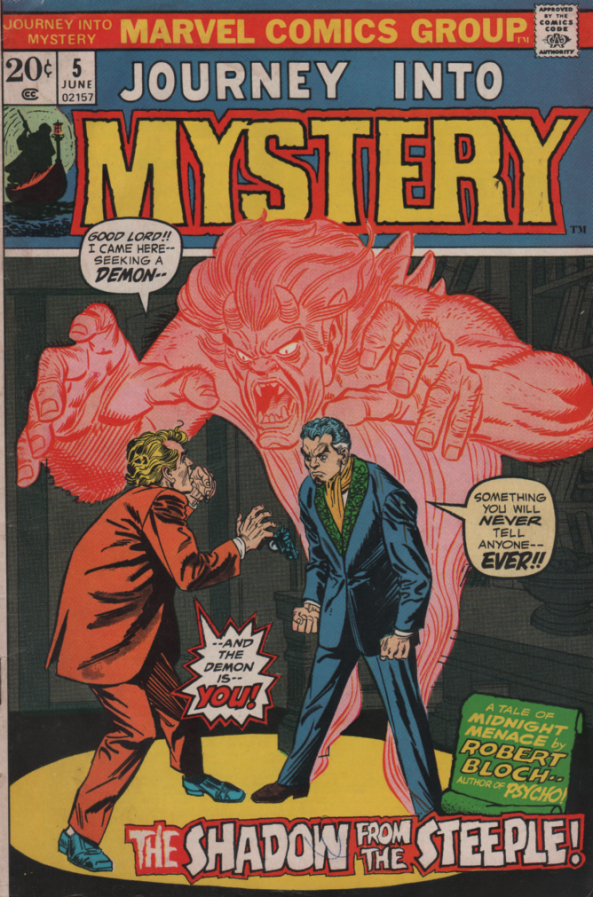 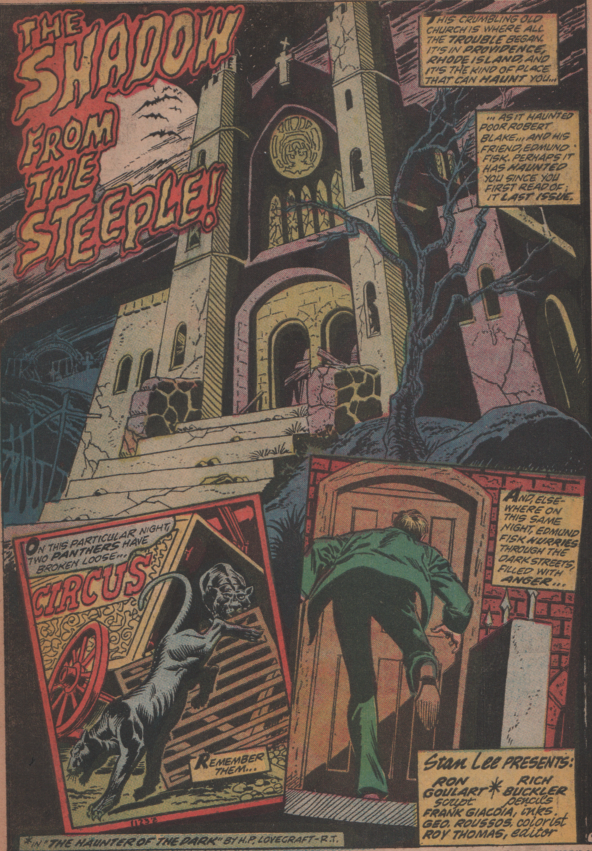 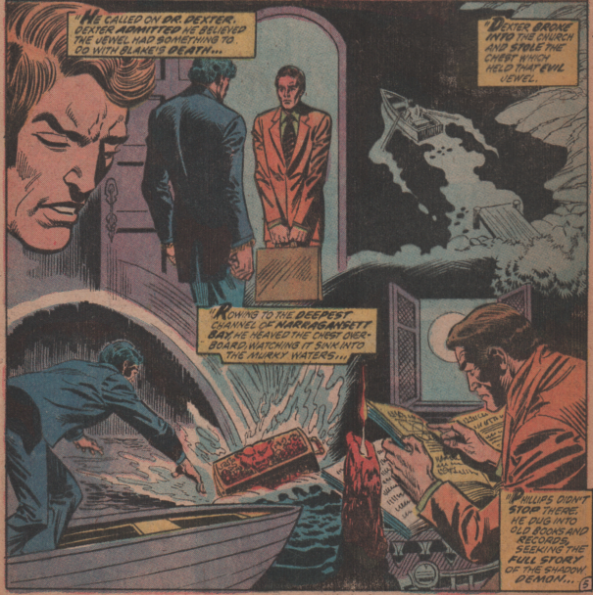 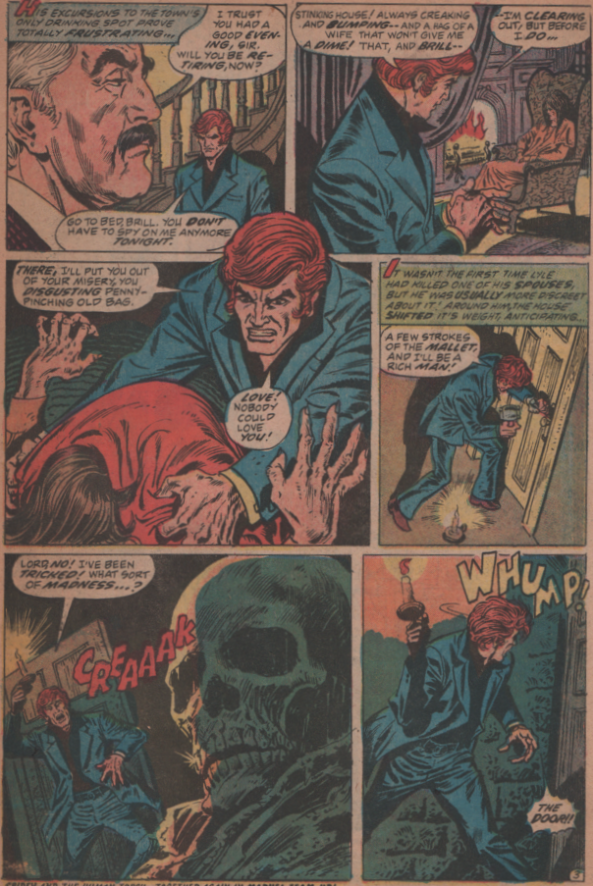 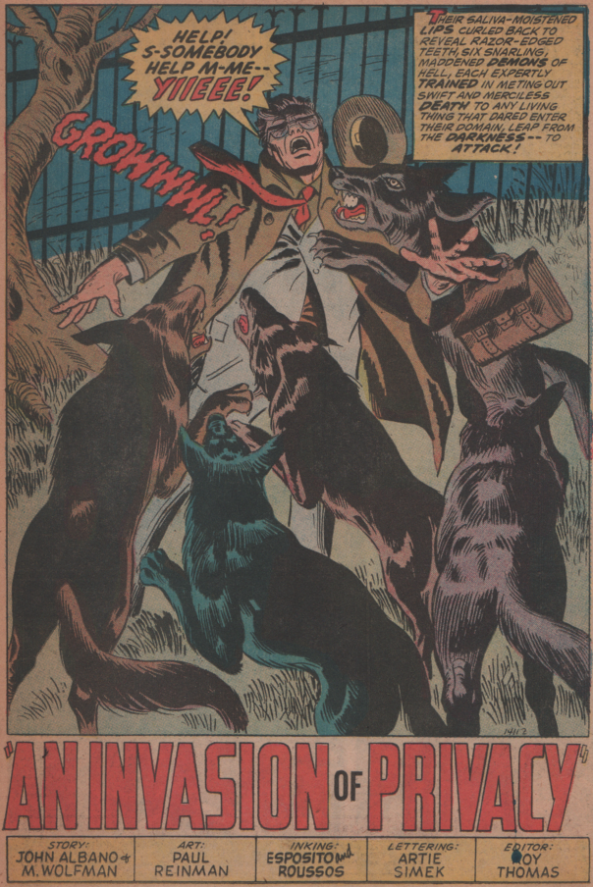 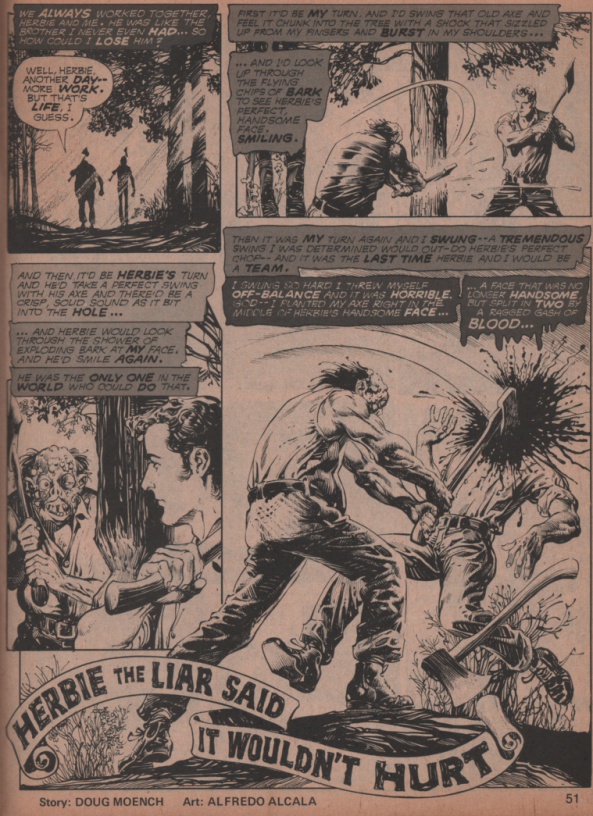 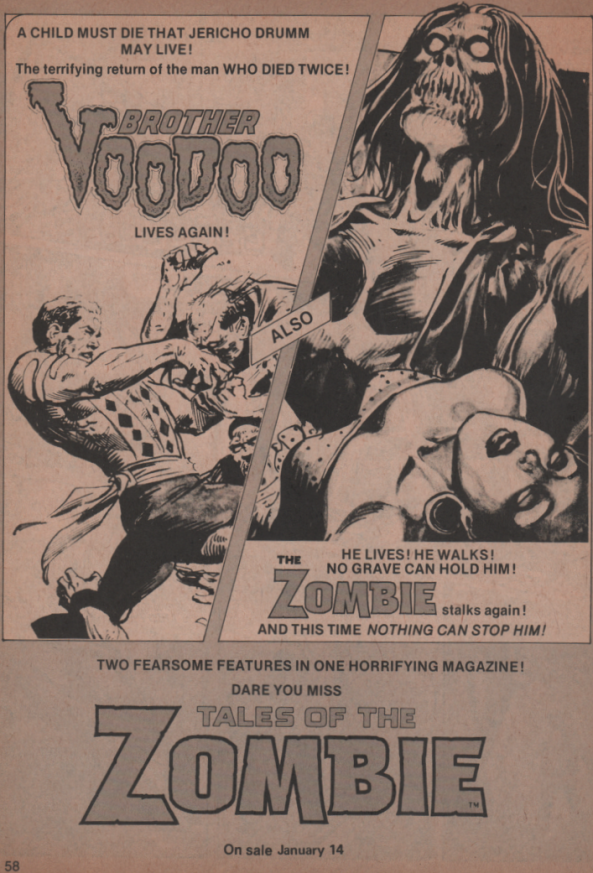 In trying to focus on more mags from the Bronze Age, I thought it was time Dracula made an appearance! The Count has a long history in Marvel Comics, and although the black and white mags are awesome, nothing compares to the Tomb of Dracula series that Marv Wolfman and Gene Colan worked on together. That said, don’t sell these stories short, because they have some fantastic creators on them! Speaking of which, inside the front cover, we see an incredible illustration by Bob Hall (first image after the cover)! It remains one of my all time favorite images of Dracula.

The meat of the book has some excellent work. The biggest part of the book is the adaptation of the Bram Stoker novel Dracula by Roy “The Boy” Thomas and Dick Giordano. It’s only one chapter but the pages are incredible. It was never finished in these format but both men finished it years later and it was reproduced in a trade/HC.

Another magnificent tale (part two) “Agents of Hell” is by Doug Moench and Tony DeZuniga. We see a young man trapped in the catacombs of a castle, and he must fight off the brides of Dracula, but even if he survives, can he defeat the greatest vampire that ever existed? That story is followed by “The Vampire of Mednegna.” This story shows a man named Arnold Paole, as he returns from a trip to Greece, but he has returned a very different man. Again, we get Doug Moench (writer) but the artwork was by Golden Age stalwart, Win Mortimer!

Finally we see a very graphic tale starring none other than Dracula’s daughter, Lilith! Within just a few short panels, she tears a rapist to pieces! This is a very different story though (not just blood and guts), and a must read because the author is none other than Steve “Baby” Gerber! The artwork is credited to three gentlemen that are names synonymous with the Bronze Age- Bob Brown, Frank Chiaramonte, and Pablo Marcos!

And let us not forget the cover that was painted by Steve Fabian!

The title “Supernatural Thrillers” is probably most known for the Living Mummy character, but its beginnings were quite different. The first four issues contained stories based off of classic monsters! This one in particular is an adaptation of the classic story by Robert Lois Stevenson, Dr. Jekyll and Mr. Hyde! The story revolves around a certain doctor that is having a crisis of conscience. He believes that his scientific endeavors trump any sort of morality. Hammer Studios did a movie adaptation that was marvelous, so definitely check that out!

The team of creators on this book are foreign to me (with the exception of the artist) for the most part. The writer, Ron Goulart, is most known for his mystery and sci-fi work. The interior artwork is by Golden Age DC artist, Win Mortimer (Superman, Superboy). He was instrumental in that era’s consistency, and along with others like Bill Finger, Jerry Robinson, Joe Kubert, and more. Letters were by Jean Izzo and editing was Roy Thomas! The cover was by “Rampaging” Ron Wilson and Ernie Chan! 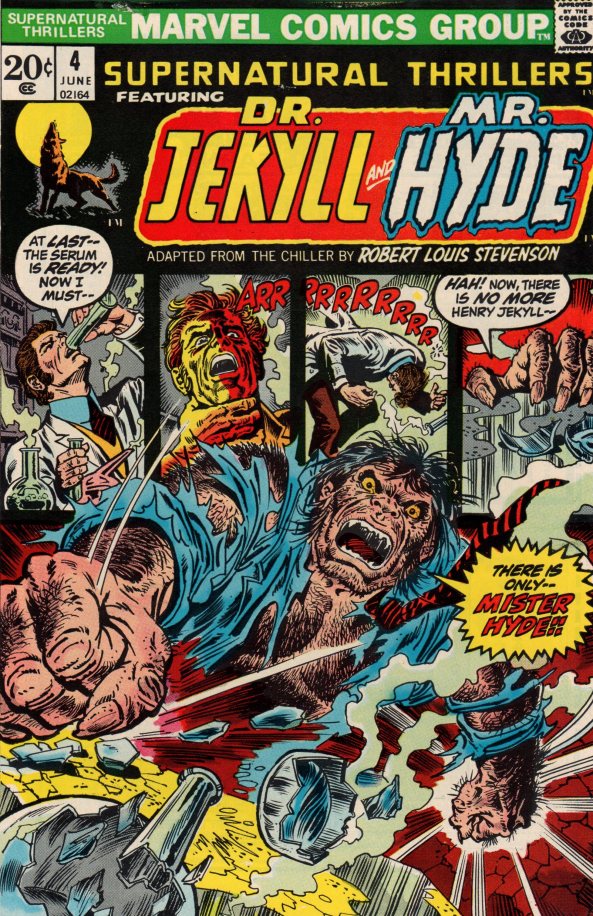 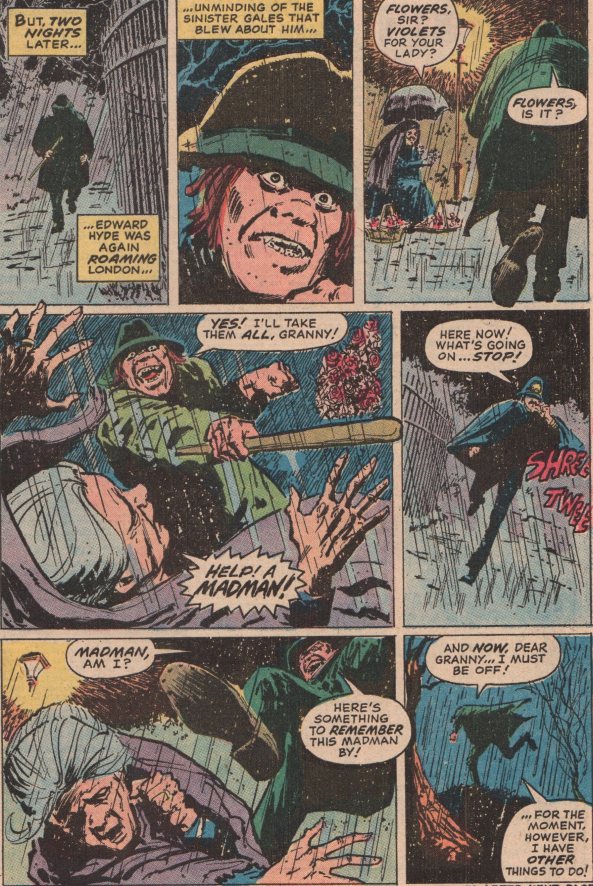 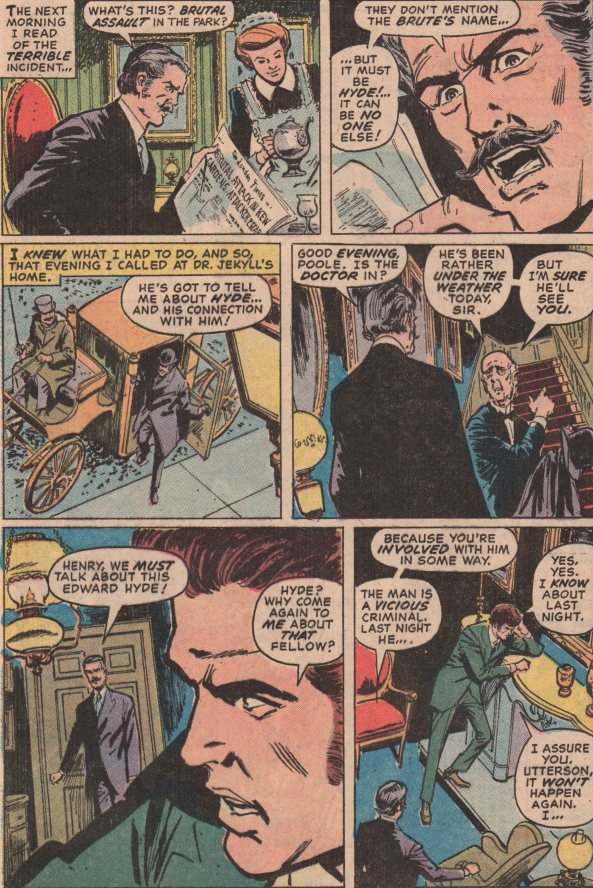