Just look at that cover! You know, John Byrne did some incredible work on this title, personally though, I think his X-Men work is his best stuff! In this fantastic issue, we get to see a few different things, (seen in flashback) one of which being Galactus, at the mercy of the Avengers, Fantastic Four, and Dr. Strange. You see, he had just traveled to Earth, and dealt with his herald, Terrax, which left him starving. At this point, he was defeated by those above mentioned forces, but they felt compelled to help him live.

Reed, along with Iron Man, and Thor, builds a contraption to feed Galactus enough power to leave Earth. Richards also uses his intellect to find suitable sustenance for Galactus as well. As Galactus awakens, he is puzzled by his enemies helping him, but tells them that if their calculations are off about the planets nearby, he’ll have to come back, and feed on Earth. At that point, the heroes will have to either let him feed (destroy Earth), or kill him. 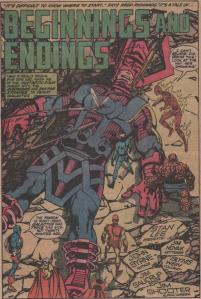 Meanwhile, Johnny’s girlfriend, Frankie Ray, A.K.A. Nova, has been watching and listening. She then makes a sacrifice, and volunteers to become the new herald of Galactus! Johnny is incensed at the thought of losing her, but she tells him that it’s what she wants. Galactus then pushes the Fantastic Four aside, encasing them in a bubble, and uses his cosmic power to enhance Nova, making her capable of things she never dreamed. She immediately takes off for the cosmos, as Johnny attempts to follow her. He falls short though, as he reaches Earth’s upper atmosphere, and flames out, due to the lack of oxygen. Galactus then ponders why he agreed to Reed and Frankie’s terms, but pauses, and as he teleports to his ship, he remarks that he might actually call these Earthlings, friends. 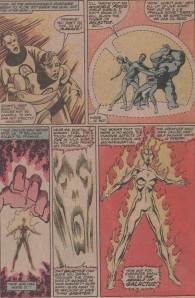 Back in the “now”, Johnny is grief-stricken, and is comforted by Juliette D’Angelo. After hearing all this, she’s absolutely floored. In the last few pages, we see a bit of a prologue, as little Franklin Richards is playing with Ben and H.E.R.B.I.E. We see him pick up a Rubik’s Cube, and his eyes begin to glow with power. H.E.R.B.I.E., then senses an immense power within him, but is blown to pieces by the surge within the child!

The artwork by Byrne is obviously great, but the story is pretty good too, especially when you consider this book was under the watchful eyes of people like Stan Lee, Jack Kirby, Marv Wolfman, Roy Thomas, and other greats over the years. I hope you enjoyed this post, and be ready for another good one in a few days!