Here we are with another Cinema Sunday, and of course, another fantastic movie! This week, we’ll take a look at another one of Hammer Studios psychological thrillers in – Nightmare! This film is much more intense than last week’s offering, but in a slightly different way. You still get a good mystery, but in this film, you also get some vicious murder scenes, as well. The cast was very small, but I think after you’ve seen the film for yourself, you’ll realize it isn’t a bad thing. Okay, let’s disperse with the clouds and get right down to this one!

The film begins with a girl wandering around a sanitarium. She hears a voice calling out to her, and is frightened. The voice calls for help, and then Janet (Jennie Linden), hears the voice tell her that she knows where to find her. Janet then proceeds down a hallway and enters a padded room. Standing in the corner, is a woman, begging for help. The door swiftly slams behind Janet, and the woman laughs insanely. Janet begins to scream, and then we see this is only a dream, and Janet awakens in bed, at her prep school. One of her teachers, Mary Lewis (Brenda Bruce) comes in and settles her down, and she goes back to sleep.

The next day, Janet is approached by the same teacher from the previous night, and she tells her that the faculty wants Janet to see a doctor. Janet tells her that she’ll refuse any appointment. She also tells her teacher that she wants her guardian, Henry Baxter (David Knight), to come and get her from school. She gets her wish, and John the butler/driver (George A. Cooper), picks her up, along with Mary Lewis, as the school believes Janet could use some guidance on the journey home. Once they reach home, Mrs. Gibbs (Irene Richmond), greets Janet, and she seems elated. They enter the home, and Mary is going to stay the evening, and go back to the school tomorrow. Janet is surprised to see a woman, Grace Maddox (Moira Redmond), in the house. Mrs. Gibbs tells Janet that her guardian, Henry, thought that Janet might like someone to spend time with at the house, instead of being alone. 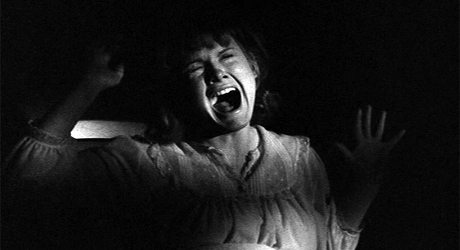 Janet goes to bed after dinner, and Mary and Grace talk. Mary asks Grace why Henry asked her to stay with Janet, and she tells her that it’s because Henry is worried about her, and she’s a nurse, so he believes she can help out. Grace then heads to bed for the evening, and Mrs. Gibbs and Mary have a talk. Mrs. Gibbs tells Mary that the reason Janet seems mentally imbalanced is because she saw her mother murder her father when she was eleven years old. She had a nervous breakdown after that, and has always worried that she might have inherited some of her mothers wickedness. Mrs. Gibbs tells Mary that even if didn’t inherit any of those traits, that even the persistent thought could drive a person insane. Mary goes to bed, and Mrs. Gibbs is tidying up, when she hears a sound near the library. She’s surprised by Mary, who claims to have come downstairs to get a book.

On her way back to her room, Mary notices that Janet’s bedroom door is open. She investigates, and finds Janet missing. She creeps down the hallway to looks for her, and then she’s surprised by Janet, who silently turns the corner right in front of her. Janet seems like she’s in a daze or perhaps sleep-walking. Mary talks to her, but gets little answers other than the fact that Janet seems to think she either saw someone or dreamed that she saw someone. Mary shows her back to her room, and then goes to sleep, pondering what might be happening. As Janet walks slowly into her room, she notices someone on the bed. It’s her mother (or so she thinks), and there’s a knife sticking out of her chest, and the birthday cake from Janet’s eleventh birthday (the same day her father was killed) on the table. She freaks out, and runs off, but is then stopped by Grace, who slaps her a few times to get her to snap back into reality.

The next morning, Janet has been sedated by the local physician, and he recommends to Henry that she be institutionalized. Henry then checks in on Janet, who, upon seeing him, pulls him in, and kisses him passionately. He pulls back, and then apologizes for not being able to meet her at school. Janet asks if the reason is his wife, and he tells her that she (his wife) doesn’t like being alone. He makes his apologies, and tells Janet he must travel to London, and then leaves. As day turns into night, Janet’s mind begins to unravel. She thinks she sees someone trying to open her bedroom door, so she calls out and asks who’s there. She gets no answer, and then gets up to investigate. She looks down the hallway but sees no one at first, but after a moment, she does witness a shadow down at the end of the hall. She walks down slowly, and keeps following where the shadow leads. Eventually, she comes upon a bedroom, and she hears the voices of herself and Mrs. Gibbs from the day she saw her father killed. She runs off to her bedroom, and sees the corpse of her father, lying in her bed. She goes berserk, and falls down a staircase, and George and Grace find her there unconscious. 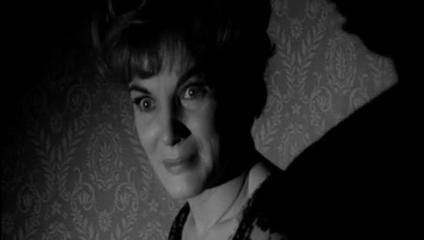 Another day, and Grace is feeding Janet her pills, supposedly from the doctor. Grace asks her what happened, and Janet tells her that some woman is plaguing her dreams. Grace tells her to get some sleep, because it’s her birthday tomorrow. A new day comes, and Janet finds herself being confused after the last few night’s activities. She then heads out to see who is around, but only finds a strange woman in a hospital gown creeping around the house. The woman vaguely resembles her mother, but we know that she’s locked up in a sanitarium, right? Janet then returns to her room, looking completely unhinged. She then smashes her mirror, and uses a shard to slit her wrist. Henry, and Grace are speaking with the doctor in the next scene, and wondering what to do about Janet. As Janet comes out from her bedroom to see Henry, she sees the back of a woman, who is introduced to her by Henry, as his wife. As the woman turns around, Janet recognizes her face as the woman who has tortured her. She then snaps mentally, picks up a knife, and brutally stabs Henry’s wife to death!

I’m not going to go any further because I’d have to go into crazy spoiler territory, and because things get slightly convoluted as well! Suffice to say that the killing doesn’t end here, and by the end of the film, there’s more than one person that’s gone off the deep end!

OK here are my thoughts:

This flick is a good one, but definitely inferior to Paranoiac. It is more grisly, and that’s pretty cool, but the twists and suspense aren’t as powerful as the aforementioned film. As I said above, it does also get a bit wacky at the end as well. This being my first viewing might have something to do with that, but I honestly don’t think so. There is another scene towards the end of the film, where Henry and Grace slap each other. It’s quite a shock to see especially for 1964.

The actors/actresses are quite good in the roles that they play. Janet’s character was played by Jennie Linden, and was a late replacement. She did a god job for someone stepping in at the last-minute. David Knight, and Moira Redmond also were very good. Both gave convincing performances. The music score was by Don Banks, and definitely worth noting. He did a good job setting a good tone, and a couple of thunderous interludes when it was right. The set was absolutely gorgeous, and up to the Hammer standard for sure. Check this one out if you haven’t yet, because it’s worth the watch!