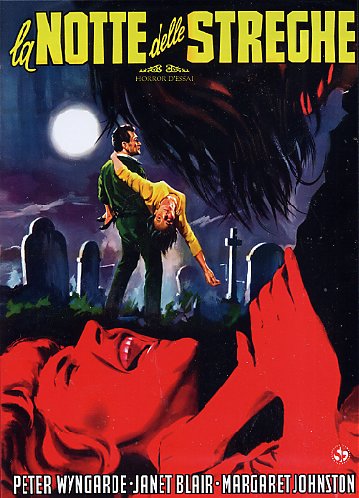 This week’s film will be a quick dip back in the pool of American International Pictures (AIP) library (by way of the U.K.’s Anglo Amalgamated)! I don’t recall how I found out about this film, but I’m glad I did! The pluses outweigh the minuses by a long shot in this one, and for a budget of $200k, they did an admirable job! The cast was relatively new to me and that can sometimes but slightly off-putting to me, but not this time around. I’ll grant you that the name of the film doesn’t sound very scary, and this might be a case of the Americanized name being better, but who knows. Alright, now that the intro is over, let’s hit the pavement, or eagles nest, I guess…

At the ritzy medical college of Hempnell, we see an instructor, Norman Taylor (Peter Wyngarde), telling his students that superstitions are nothing but a bunch of poppycock. One student in particular, Margaret Abbott (Judith Stott), seems to be quite smitten with him, and asks about personal superstitions, like walking under a ladder, and the like.  He dismisses them as well, and tells the students not to believe any of it. Class ends, and then that same female student stays after class for a moment. Another student, Fred Jennings (Bill Mitchell), doesn’t hand in his paper, and Taylor threatens to have him thrown out of the class. Later, out in the hallway, Jennings threatens Margaret, because of jealousy.

Norman arrives home and his wife, Tansy (Janet Blair), greets him after she’s just returned home from spending some time at their cottage. She complains about having to spend the evening with the others. but Norman convinces her it will be fine. Later that night, as the game of bridge is underway, as a couple of others have joined. One person in particular seems to be very interested in the new couple (Norman and Tansy are new to the school), and why everything seems to go their way. Norman remarks that Tansy is his good luck charm, and again, Flora Carr (Margaret Johnston) gets a peculiar look on her face.

The evening ends, everyone leaves, but Tansy seems troubled. She begins to rummage through the home as if she’s lost something. When Norman asks her about it, she claims she’s looking for the grocery list, but it’s obviously a lie. Norman heads upstairs for bed and Tansy promises to be up soon. She stays to keep looking for something though. As Norman opens a drawer he discovers something in the corner. A small box he doesn’t recognize is in it, and when he opens it, a dead spider falls out. Tansy bursts in the room, and Norman wants an explanation. She tells him that last year when they were on holiday in Jamaica, a local gave it to her for a souvenir. He accepts her story, then they go to sleep. Tansy awakens though, and you can tell that something is bothering her. She finds a type of voodoo doll tied to a lampshade, and immediately takes it down, pulls it apart, then burns it, in some type of ceremonial act.

The following day, Norman is typing away, and the dry cleaner comes a knocking. He lets him in and grabs a few articles of clothing. He pricks his hand on something inside a shirt, and after searching, he finds a small envelope of some substance. He immediately heads upstairs to search the rest of the bedroom. The entire house is then searched and he finds dozens of relics, charms and all sorts of the things he teaches against in his classroom. It finally hits him, his wife is a mystic.

Tansy then returns home, and sees that one of her charms by the front door is missing. Upon entering the home, she sees that all of her things have been laid out on the table. The couple argues, as they’re both on opposite sides of the fence on the subject. She explains that she did it for him, and it was for protection. He can’t believe it, and tries to force her to destroy the items. She warns him that the reason she got into all of this was because when they were on holiday in Jamaica, he almost died from an accident, but a local shaman showed her how to revive him. Norman refuses to believe such rubbish, and then tells her she must give it up. She watches in disbelief, as Norman throws all of her charms, protections, etc. into the fireplace. He asks her one last time if that’s everything, and she then pulls out a locket, that has his picture, along with a charm of some sort. He even tosses that in, including his own picture! Tansy freaks out, and then after she calms down, a bit, she goes upstairs to bed. Norman then receives a phone call, and initially the caller says nothing, but then he hears someone breathing and then the female voice begins to talk dirty to him. He demands to know who it is, but the woman just keeps on going. He slams the phone down, and then heads up to bed.

Almost immediately, things begin to go awry for Norman (like almost getting run over by a truck, being accused of raping a student). Was Tansy and her magic protecting them from sinister forces that lurk around everyone? Or is someone behind the events that are just beginning to plague the happy couple? Watch to find out!

This one flew under my radar, as I’m sure it has for most, but let me tell you something. Get it on your radar now! The two leads (and the villain), are absolutely fantastic! Not a lot of bells and whistles with this film, and the “special effects” are just moderate at best (there are only a couple). The sets are average as well, but again, that’s not the driving force behind this one. The cinematography (Reginald Wyer), did an outstanding job, and should be praised. The music score (William Alwyn) was also very good, bringing the viewer up and down like a roller-coaster.

The screenplay has three credits, but when you see the name Richard Matheson (Last Man on Earth, The Night Stalker),  you should know it is one of legend. His written work along with his TV and film work is also full of solid stuff. The usual gang from AIP was involved as well, and those guys, even with their cheesy reputation, always manage to get it done. Definitely look this one up around the web, because you’ll enjoy it!