It’s no secret to anyone that reads this blog, that I really love crazy DC Silver Age stories. Well, this one is one of the hammiest stories I’ve read in a while. The stories are basically all imaginary that don’t count towards continuity (even before Crisis came along in the 1980s), but they’re still a lot of fun!

The first story shows a “death of Superman,” but not “the” death…oh wait, that was bogus too. So this story (“The Girl who Mourned for Superman“) isn’t any different than the blockbuster from the speculatory period in the 1990s. Back to 1963, and Lois, as she’s wandering around and sees some kids trying to recreate the Ben Franklin kite and key experiment. After a minute of peer pressure, Lois agrees to help them. Just as a lightning bolt strikes the kite, Superman swoops in to save the day, and to chastise Lois for this “hair-brained stunt.” Then Lois heads into the Daily Planet, and gets an assignment from Perry. As she attempts to leave in the helicopter, the vehicle is sucked up into a plastic sphere, directed by none other than Lex Author himself! It’s all a ruse to get his most hated enemy, Superman, to try and save Lois, and fall into a trap! Script by Leo Dorfman, art by Kurt Schaffenberger (cover by Schaffenberger as well).

The second story, and coincidentally, the one that mirrors the cover image, shows Lois as a volunteer nurse at the local hospital. Perry ends up there after tripping over a ball and chain that Jimmy was using as a prop. A general then enters Perry’s room, to ask him to keep an eye on a soldier that’s in the hospital. Immediately the soldier falls for Lois. But, there is quite a plot twist in this one, that I’ll keep a secret! Writer, Leo Dorfman, art by Kurt Schaffenberger.

Lastly, we get “The Girl Who Deserted Superman!” Yes, I know, a lot of “girls” in these books. In this one, Lana gets hurt water skiing, as she falls off her skis, and somehow falls in the water, floats to the bottom, and hits her head hard enough to get a concussion. Lois and Superman decide they knows better than the doctor, and can snap her out of her coma by whispering to her about some fantasy’s they think she has about Superman. Absolutely ridiculous and absolutely hilarious. Welcome to Silver Age DC comics. Again, Dorfman and Schaffenberger as the creative team.

Check out the last image, as it’s a fantastic advertisement from the back cover of this book! Enjoy! 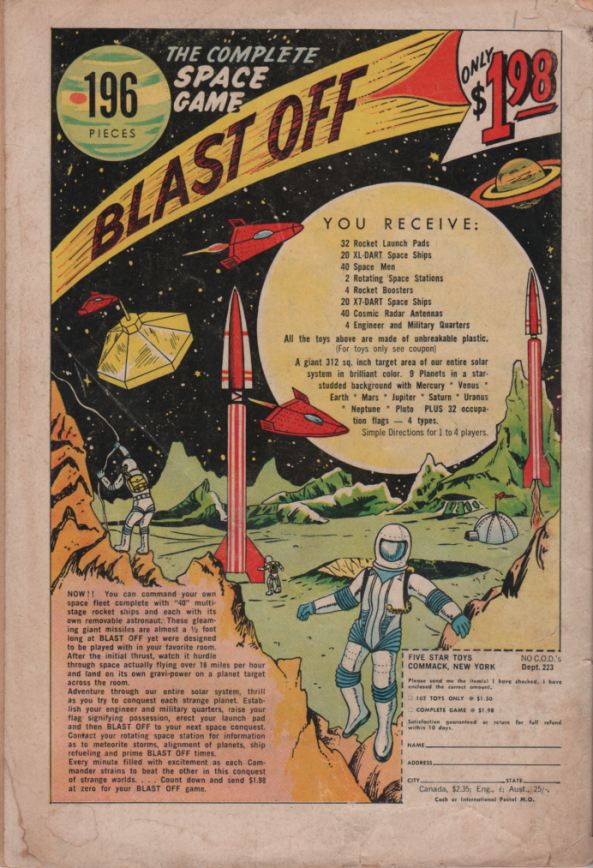