If you haven’t figured it out by now, crazy comics bring me quite a bit of joy. Mostly Bronze Age comics that were written with a bit of intent as far as the craziness is concerned, but also insane Silver Age stories that were intended to entertain children, but by some stroke of luck or mild intent, they also amuse me to no end. One of the characters at the top of the Silver Age list is definitely Superman. Long before Christopher Reeve donned the cape and tights, and made us believe a man could fly, writers and artists were creating stories and worlds for this character that were very wild and went in every direction. This annual is just one example of the insanity. There are seven magnificent stories in this book, along with several illustrations. The best of these is a schematic of the Fortress of Solitude!

The first story, “The Super-Prisoner of Amazon Island,” doesn’t (unfortunately) feature Wonder Woman, but it does show an island full of Amazon women that have captured the Man of Steel, and are intent on auctioning him off to the highest bidder. Story by Otto Binder, art by Wayne Boring and Stan Kaye.

Next up is “Superman’s New Face.” We see a scientist with an experiment gone awry. Superman interjects, and saves the man, but the ensuing accident scars Superman’s face badly (the explosion created tiny particles of Kryptonite). Of course he’s too embarrassed to show Lois, but she needs to find out how bad it is! Written by Edmond Hamilton, with art by Wayne Boring and Stan Kaye.

The third installment gives us a real gem in “The Ugly Superman!” This story is a real winner for Lois, as she befriends a wrestler that dresses like Superman, but then he falls completely in love with her. He even lays a beating on Clark Kent! Written by Robert Bernstein, art by Kurt Schaffenberger. “The Lady and the Lion,” is up next, and this might be the gem of the book. And by gem I mean the highest concentration of insanity. In this one, Superman is duped by Circe into drinking a formula that will turn him into a lion if he doesn’t return and agree to be her mate! Written by Otto Binder, art by Wayne Boring and Stan Kaye. The following story is, “The Superman of the Future!” This story revolves around Superman helping a local scientist test a time machine. The machine of course has interesting side effects, and Superman growing an enormous brain (maybe) are just part of the shenanigans. Written by Otto Binder, with art by Curt Swan and Stan Kaye. 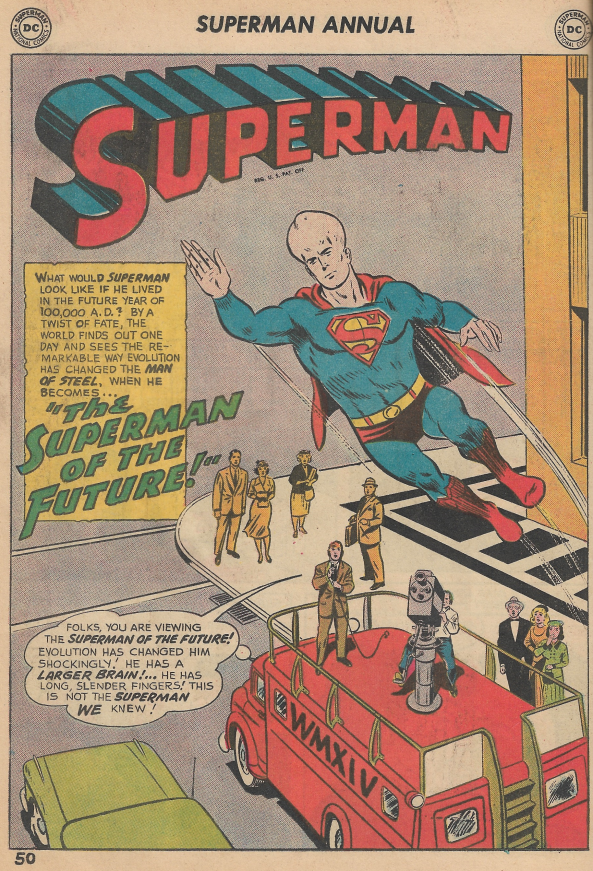 “The Oldest Man in Metropolis” is the penultimate story in this crazy book. In this story, Superman refers to himself as “an old duffer who can hardly stand up!” We see Clark Kent doing an interview with an acclaimed scientist. The scientist tells Clark that he’s perfected a formula that will extend human life. The doctor tells him that he intends to try it himself before asking for any volunteers. Clark thinks it would be better if he takes it, because it won’t hurt Superman! He takes it and leaves, then the doctor finds the guinea pigs that he tested it on earlier, and they’ve grown old! Story by Robert Bernstein and art by Al Plastino. 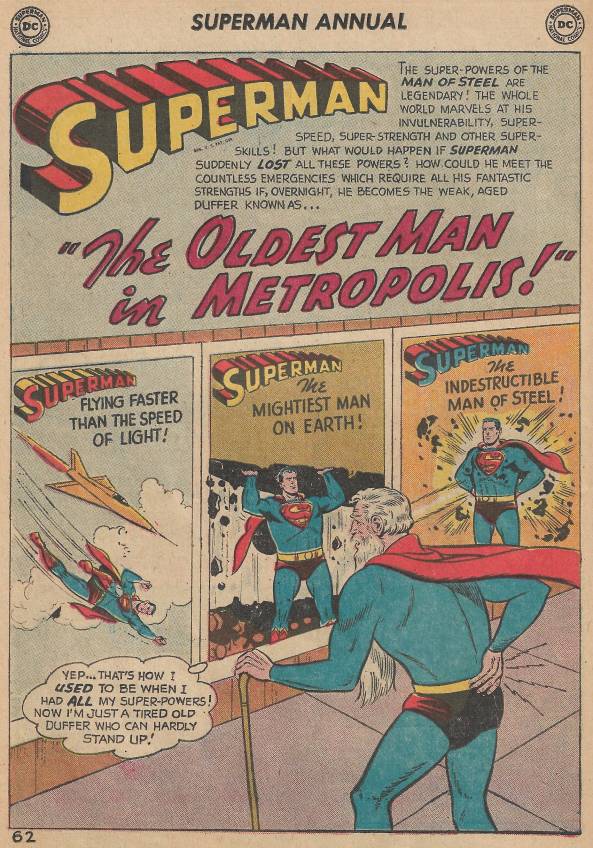 Finally, we get “The Two Faces of Superman!” In this one, Lois has a blind date with a guy, but wants to chase Superman instead, so she makes herself look less than desirable, so the blind date will take her home early. He does, then the date with Superman commences, but he saw her actions with the blind date and teaches her a lesson! Written by Jerry Coleman and art by Kurt Schaffenberger.

And check out this back cover! Classic Superman for sure!