Title: Creature From The Black Lagoon 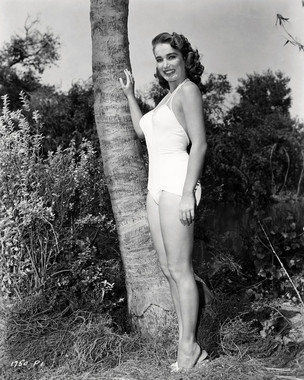 First, let’s get something out of the way before we get to the synopsis, and then my thoughts. This film is one of those few, that are perfect. For its time, it was scary, intriguing, thought-provoking, and just an all around great experience. To movie lovers, it still is, and that will never change. This film stands the test of time. OK, now that we’ve got that aside, let’s get to it!

Creature from the Black Lagoon was released in 1954, amidst the big sci-fi boom of the 1950’s. Many studios were putting out films with space exploration, otherworldly creatures, alien invasions, giant radiation mutated bugs, etc. It was definitely the best decade for new films of that genre. With household names like Richard Carlson, and the gorgeous Julie Adams! This movie was also very cool because it was filmed in 3-D! Alright, enough of the posturing, let’s get to the movie!

The film begins with a research party looking for fossils in the Amazon Basin. Dr. Carl Maia (Antonio Moreno), finds a fossil of a webbed hand, that appears to be part human, part amphibian. He rushes back to the institute where he works, and finds Dr. David Reed (Richard Carlson -far right, image above), and his assistant/lover, Kay Lawrence (Julie Adams), as they are doing research at the institute on marine life. He shows them and two other doctors the fossil, and they all conclude that this might be an evolutionary missing link, and it must be found. They get Dr. Mark Williams (Richard Denning -far left, image above) to finance the trip, and head down to the Amazon Basin. While they’re away, two of Dr. Maia’s laborers are brutally attacked by some strange and mysterious creature!

As the expedition arrives, they seek out the laborers, but find their bodies have been torn apart by something unseen. They dig for eight days, but find absolutely nothing. Mark is getting frustrated, but then David theorizes that some of this basin must have been washed away at some point, so they travel a little more down the river, to a lagoon. The boat (Rita), is captained by a man named Lucas, who seems to be a bit unscrupulous, but knows the waters very well. Mark and David head into the murky waters to check things out, and soon realize, that they are not alone. As they explore the depths of this mighty river, they find a fascinating creature, that looks half human and half amphibian. Mark shoots it with his harpoon gun, but it doesn’t even seem to faze the creature. It swims away, and the two men head back to the boat. They tell the others of this incredible creature, and they formulate a plan to capture it.

They fashion a cage from bamboo, and then use a drug that the captain uses to catch fish when the nets aren’t working to well. It’s a kind of powder that they spread through the water, and it will hopefully slow the creature down enough to be captured. Mark still wants to kill it, but David is adamantly against that action. As they put the plan into motion, the creature attempts to enter the boat, but is driven off by fire. It dives back into the river, and they follow it to its lair. It attacks Kay, but then falls to the ground, passing out from the drug. AS it regains consciousness in the cage aboard the ship, it sees Kay talking to one of the other scientists. The creatures strength returns, and it busts out of the cage easily. It savagely attacks the scientist, but gets lit on fire by a lamp. It retreats into the river, and the team is left in shock.

Mark wants desperately to go after the creature, but David tells him that it’s too dangerous, and that they are leaving. As they proceed back up river, they see that their exit is blocked by a fallen tree. David thinks that it was the creatures doing, and he and Mark argue over a plan of action. As David tells him that he’s going to go into the water to tie a rope around the tree, so they can pull it out of the way with the ship’s wench, Mark attacks David, but ends up getting punched out by David. David then goes into the water, but is attacked by the creature. Luckily for him, Mark has decided to come into the water, and help. He uses his harpoon gun to fight off the creature’s attack, but eventually gets killed by it in the end. This leaves David and the others to find a way to stop the creature, and try get out alive!

OK, here are my thoughts on the film:

As I said in the beginning, this film is perfect. The story is fantastic, but unlike a lot of horror, sci-fi movies, it doesn’t leave you guessing about what the creature looks like very long. Sometimes that can take all the suspense out of a movie, but it certainly does not in this one. The tension between Richard Carlson’s character and Richard Denning’s character is great! Throw in the gorgeous Julie Adams, and you have a really solid chemistry. Even Antonio Moreno and the others lend their strengths to the dialogue.

A great soundtrack, with an overall thunderous tone, gives a suspenseful feeling to this movie. I can’t imagine this one in color either, the black and white print is outstanding, and the 3-D “effects” were good for their time, no doubt. Honestly though, it could have easily done without that tag, but it was a sign of the times, so who cares. The underwater scenes in particular were really incredible. You can find this movie just about anywhere and for a decent price as well, so there’s no excuse to not own this classic Universal flick! With guys like Jack Arnold and William Alland!