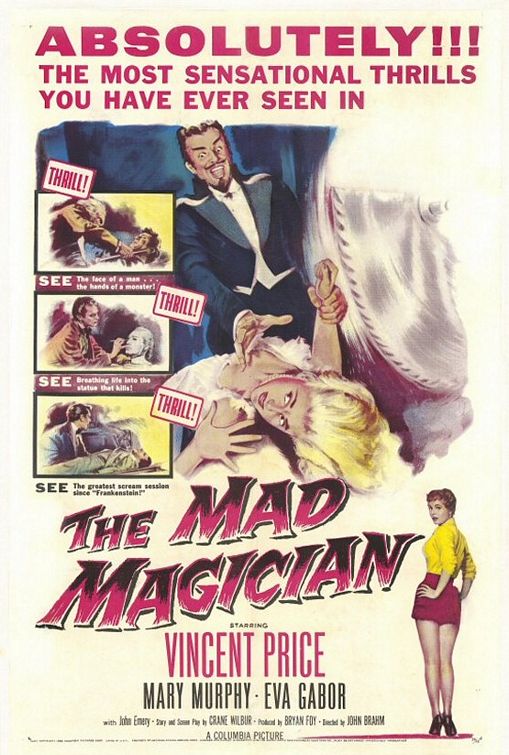 This past Halloween has me completely focused on one actor – Vincent Price! I can’t get enough of his films, and that will continue today with a look at another one of his classics. This film has quickly ascended to near the top on my favorite films of Price, and won’t likely be pushed backwards any time soon. The film’s director has a pedigree in the entertainment industry, and we’ll touch on that a bit later.

For Price, this film was one that followed his huge hit, House of Wax, so you know that his name was slowly becoming a household name, and could begin to draw in moviegoers by the droves. Price almost went explicitly horror after this film, with a few minor exceptions. That genre would cement him as one of the biggest  horror icons of all time. Now, let’s get to the plot! 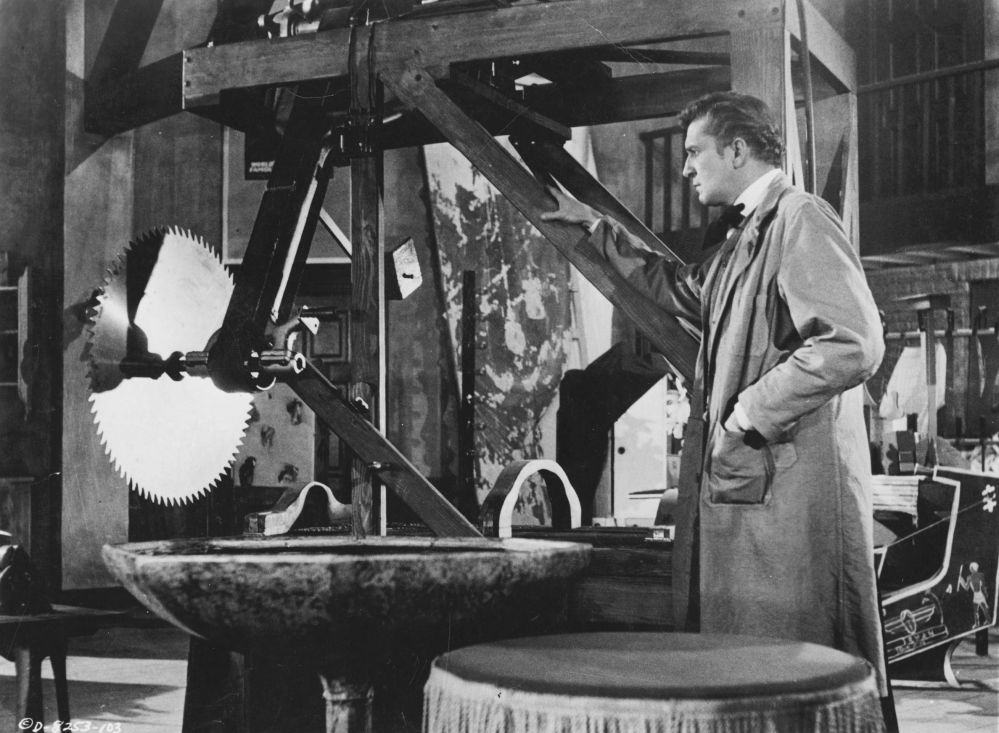 The film opens with a typical street scene of that era (turn of the century). People muddling around, without a care in the world. A poster for a show running adorns the side of a building, and announces that Gallico the Great will perform many illusions, and the most dangerous of them all is the “Lady and the Buzz-saw” trick! Inside, the crew is bustling around, attempting to ready for the show. On stage, a man, Don Gallico (Vincent Price), is giving instructions to the musicians on how he expects them to follow his lead. Meanwhile, at the front door, a man, Detective Alan Bruce (Patrick O’ Neal)  is seeking entrance but the doorman tells him that no one is allowed in during rehearsal. He mentions that he’s there to see a friend, Karen Lee (Mary Murphy), and the doorman lets him in to see her.

Back on stage, Gallico talks to Karen and Alan about this being his first performance, so he’s very nervous. Karen explains to Alan that Gallico has been in the industry for a long time, but behind the scenes, building the marvelous contraptions that other magicians use to mystify the crowds. He felt it was high-time he stepped out from behind the curtain, and was the star  of the show! 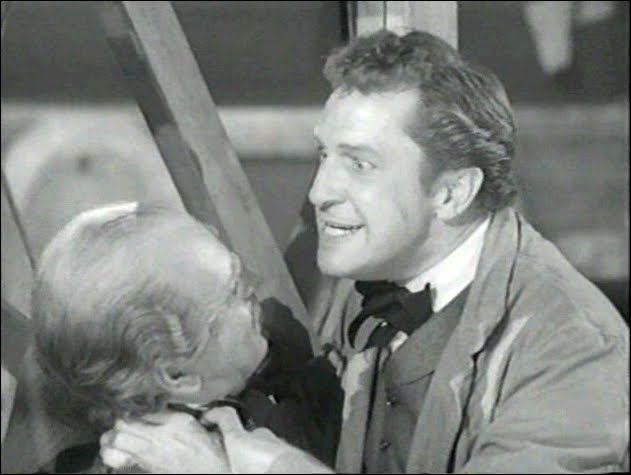 That night, the show opens, and back in the dressing room, Gallico prepares for his big night. He’s wearing a disguise, one that mimics one of his competitors. The magician he impersonates is the Great Rinaldi. He does a few simple illusions, one involving his assistant, Karen. He leaves the stage to prepare for his next big illusion (the buzz-saw trick), and everyone readies themselves. As he removes his makeup, he returns tot he stage, and demonstrates his saw. It tears right through a wooden post, that slightly resembles the shape of a human body/head. Just as the trick is about to begin, a curtain falls, and Gallico is furious. The building manager tells him that two men have arrived with an injunction, stopping him from doing this trick. Ross Ormond (Donald Randolph), owns the company that Gallico works for, and he tells him that the machine belongs to him. He demands that Gallico takes it to his warehouse in New York City, or he’ll never work in the industry again (he insinuates that Gallico will be blacklisted). Gallico snaps, and tries to grab Ormond, but Karen’s boyfriend Alan, stops him. You can literally see the hate in Gallico’s eyes, and we know this will not end well. 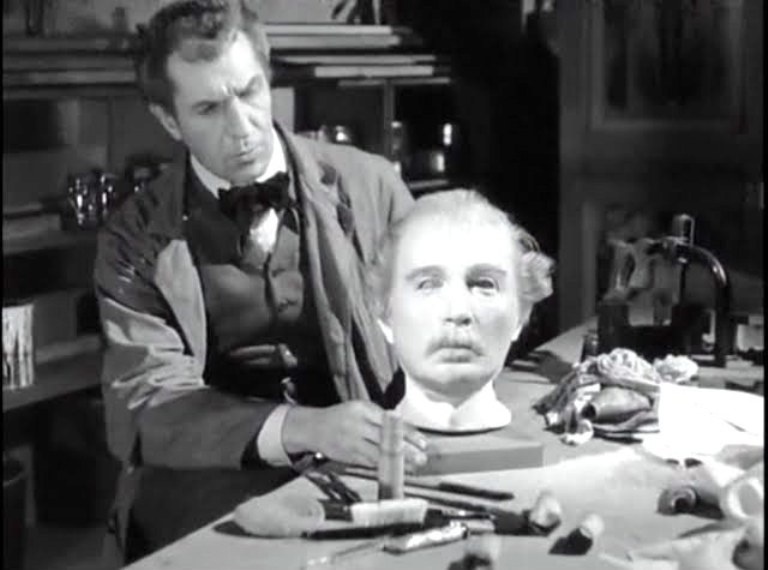 The next day, Gallico and Alan are looking over the contract, and see that there is no way out. Alan feels bad for Gallico, and tells him that he’ll help any way he can. Ormond and the Great Rinaldi (John Emery) show up, and tell Gallico that they will be using the buzz-saw trick at his next show at the same theater Gallico had booked for his big show. Rinaldi leaves, and Ormond then informs Gallico that he knew about the machine well before the night before, but wanted to teach him a lesson in humility, so he waited until he was on stage, then humiliated him at the worst moment. To make matters worse, Gallico had a beautiful wife, but Ormond stole her away from him (with his money). As the two men recount the past, the face of Gallico reveals his incendiary feelings towards Ormond. In a fit of rage, Gallico chokes Ormond, then places him on the buzz-saw machine, holds him down, and activates the saw…

A while later, Gallico is cleaning up the studio, and Karen knocks at the door, he finishes cleaning up, and lets her in, but is obviously rattled. He thanks her for her help with the show, and writes a check to her for her work. She leaves to go and meet Alan for dinner, but grabs Gallico’s bag by mistake (they look very similar), and heads out. After a minute or so, Gallico realizes that she took his bag instead of her own, which shouldn’t be a big deal, accept that Ormond’s head is in his bag! He rushes to the restaurant and finds Karen and Alan. He asks her for the bag, but she left it in a cab. Frantically, Gallico tracks down the cab that took her to the restaurant, but he tells her that he saw it was left in the cab, so he gave it to a cop. He tracks him down, and retrieves the bag before anything goes awry. 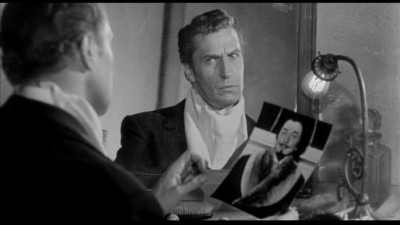 Next, we see that Gallico saved the head for a specific reason. He uses it to make a model and then a mask, replicating Ormond exactly! He then tosses the body on a bonfire (the town is celebrating a football game victory) to get rid of the evidence. We then see him with his “Ormond” mask on, and he then assumes that identity. He rents a room at a nearby building, and begins to build something. out of the blue one day, his ex-wife shows up, and immediately begins to hit on him. She questions him about the whereabouts of Ormond. Gallico tells her that he doesn’t know where he is, and when she goads him, he slaps her, then warns her to get out. She then goes to the police, asking for their help in finding her missing husband. 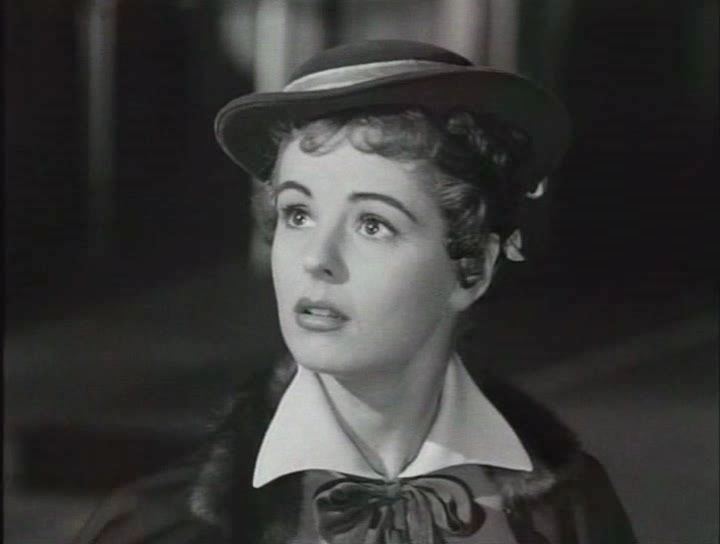 Soon after, Mrs. Ormond gets call from the landlords where Gallico (disguised as Ormond, but using an assumed name) is now living. The landlords out him, and then allow her to wait in his room, and surprise him. She surprises him alright, but then the surprise is on her when she realizes that it’s Gallico. He listens to her talk about how she only wanted Ormond for his money, and now she’ll hook back up with him, because she’s also deduced that Ormond is dead. Gallico snaps, and throttles her to death. The landlords bust in, but Gallico jumps out the window, and escapes. The next day, the police have Gallico, the landlords, The Great Rinaldi, and Kate, in a room for questioning. The group basically feels as if Ormond killed his wife, and the police say that they have fingerprints that corroborate this theory. 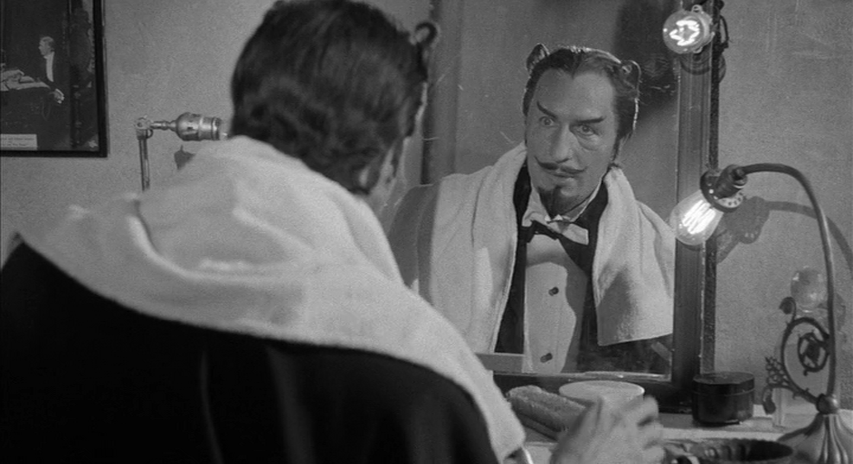 Gallico then finishes his latest trick, and shows it off to a few people. It’s a device called “the Crematorium,” and it looks spectacular. Lurking behind a curtain is the Great Rinaldi, and you just know he plans on stealing this new trick. As the trick is finished, Rinaldi pops out, and declares that he’ll be using the new device at his show. This is the last straw for Rinaldi, and Gallico has had enough of his pompous blustering. We don’t see the heinous act, but soon after, we see the Great Rinaldi, performing on stage, is actually Gallico in disguise.

As the police start closing in on the real killer, Gallico seems to be coming more and more unhinged. Will they catch him before he commits another murder? Watch the movie and find out! 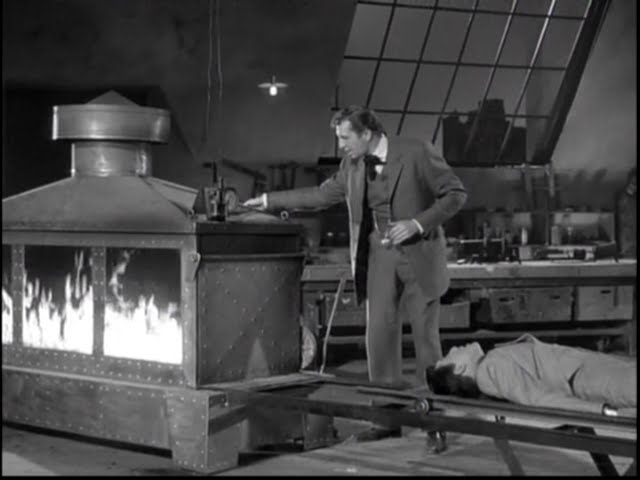 This has to be considered one of Price’s best films. If you watch this one, it gives you chills when Price goes off the deep end. Why you ask? Because put yourself in that situation, and think about it for a moment. Everything you ever loved, worked for, or cherished gets taken away from you in a very humiliating manner. Yeah, exactly. Price has always played a good crazy person, and this one doesn’t disappoint. The ancillary characters don’t really give stellar performances, but Price gives such a grand one, that it doesn’t even matter. That’s not to say that they bring it down, but most of them are just bland.

The direction, production, and overall crew did a fantastic job at selling this film. The budget wasn’t very high, so you had to have a great show put on by Price, and of course, being the consummate pro, he did just that for audiences around the country. This film is one I’d love to see on the big screen and in 3-D (as it was originally released). I believe the film is in public domain, give the link below a click, and have at it! You will be more than satisfied after the seventy-two minutes are up! As I spoke of briefly earlier, the director, John Brahm, has a family history in the entertainment industry, including the work of his father, Ludwig Brahm, an actor himself, and also his uncle, Otto Brahm, who was a theater man, director, and critic as well!