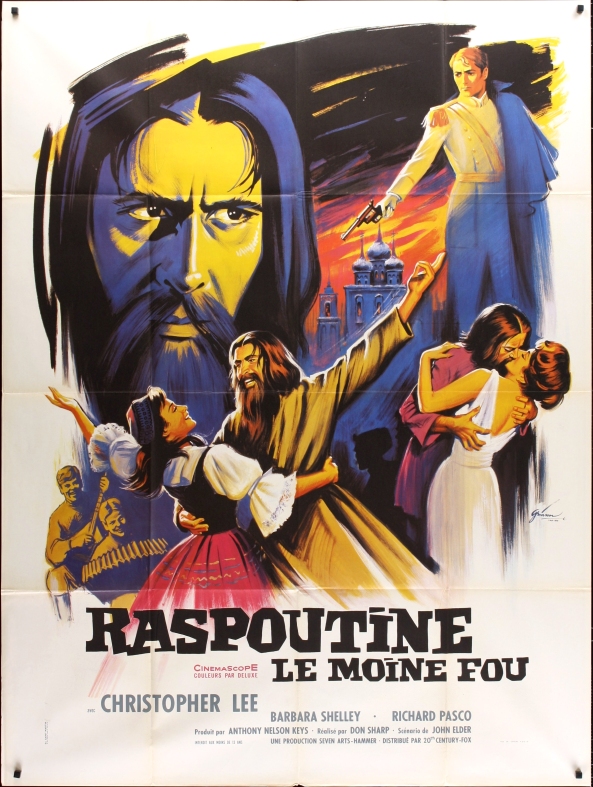 After a quick break (for a soccer tournament), I’m back and have a great flick in store for everybody! With the recent passing of Sir Christopher Lee, I thought I’d get at least one (if not two) movie of his out there that was a bit lesser known compared to his big hits. In 1966, Hammer Studios had a few different films that were not in their typical Dracula/Frankenstein’s monster vein. These films were so very good, because not only did they give us the atmosphere and sets that the previous films did, but also all the great actors as well!

I’m not a big fan of this character in history, and I do know that Hammer took a few liberties with the story, but it doesn’t really matter. The film is about entertainment, not being factual. Alright, now let us get down to the film!

The film begins at a local pub in a small village. A doctor is there telling the landlord that his wife is gravely ill, and on her death-bed. As the patrons look on, the family is upstairs, trying to pray for the woman. Suddenly, the door to the pub swings open, and a grisly looking man clad in a monk’s outfit barges in. The monk tells them that there is fever in her, and that he will draw it out. He begins to perform a ritual of sorts, and the family looks concerned. Within seconds though, he succeeds in healing the woman, and everyone is astonished. The landlord then allows the monk to drink freely at his pub and to fraternize with his daughter.

The villagers seem to be skeptical of this man, and get an uneasy feeling about him. After everyone is good and drunk, the monk and the pub owner’s daughter disappear. The next thing we see, the two of them are in the barn making out. The girl’s boyfriend comes in and breaks it up, and he and the monk get into a brawl. Eventually, the monk chops off the guy’s hand with a scythe and he runs screaming from the barn. The monk then attempts to rape the young woman, but the rest of the villagers from the pub stop him. He runs off, back to the monastery where he resides. The next day the villagers confront the monastery about his actions, and he then introduces himself as Grigori Rasputin (Christopher Lee).

He then basically gets cast out (or a punishment where’s he ejected from the monastery), and is on a wagon ride to nowhere. The man driving the wagon tells him that he should go to St. Petersburg because that’s where the action is to be found. Rasputin then commandeers the wagon and heads straight for the city. Once there, he goes into a pub and starts drinking. He then engages in a contest with another patron to see who can drink the most. Over on the other side of the city, we see a ball going on at the royal palace. We then see Sonia (Barbara Shelley) (a “lady in waiting” for the czar), as she’s bored to death by these events, and craves some real fun. Her brother, Peter, (Dinsdale Landen), his friend Ivan (Francis Matthews), and another girl, Vanessa (Suzan Farmer) (another “lady in waiting”), then take a trip to a local pub that can get rowdy (the same one that Rasputin is at). 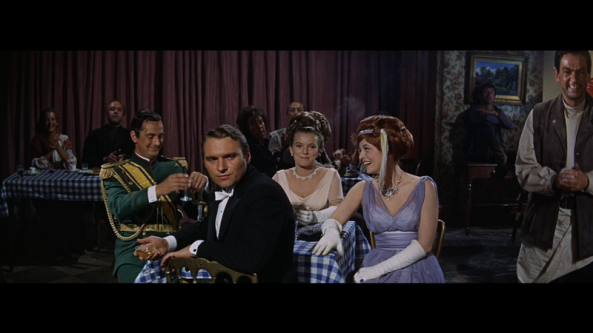 The group shows up and see Rasputin and the doctor, Boris Zargo (Richard Pasco), having their drinking contest. The contest is eventually won by Rasputin, and he then begins to dance like a wild man, and Sonia is getting very drunk at this point. She begins to laugh out loud, and as the music stops, it seems as though she’s laughing at Rasputin. He stares t her and demands that she apologizes for laughing at him. Peter attempts to get tough with Rasputin, but he gets slapped away like a child. Sonia is enthralled by Rasputin, and then she apologizes to him. The scene ends, and Rasputin takes the drunken Boris home.

The following day, Sonia seeks out Rasputin, as he’s put the whammy on her. She again apologizes, and then he slaps her around a bit, then they have sex. Boris goes out for some food and wine, then returns to see Rasputin hypnotize her and tell her that while the heir to the throne is under her care, the boy will have an accident, and then she will send for a “holy man” that she knows can heal the boy. The following day, she and Vanessa are watching Alexei, when Sonia pushes him off a ledge, and the boy is hurt badly. None of the doctors or priests can do anything, so then Sonia urges the Tsarina to let her bring in Rasputin.

After a few days, Rasputin arrives at the palace, and does heal the boy. The Tsarina is impressed and offers to reward him. Initially, he refuses payment, but after a few days, he then accepts a gift from her. He also takes full advantage of the opportunity alone with her to hypnotize her, and put her under his spell!

Will Rasputin gain control of all of Russia? Will anyone be able to stop his madness? Watch to find out!

If you haven’t seen this film, it’s a must. Lee is very impressive in this film and will convince you of the evilness of Rasputin! Barbara Shelley is also absolutely incredible in this one (and looking as beautiful as ever! image below). Her chemistry with Lee is undeniable, and after working together before (Dracula Prince of Darkness) probably helped. The supporting cast is right there as well, and Richard Pasco, Suzan Farmer, and Francis Matthews are all splendid.

This film was a double-bill with Dracula Prince of Darkness, so you see a lot of the same sets, but in typical Hammer fashion, they redress everything well enough to make it seem like two separate locations. The music score was good too, and Don Banks is one of those guys I consider right up there with the greats of this time/genre.

Get on this one immediately if you haven’t already viewed it and if you have but not in a while, sit down and enjoy this masterpiece by Christopher Lee (RIP)!