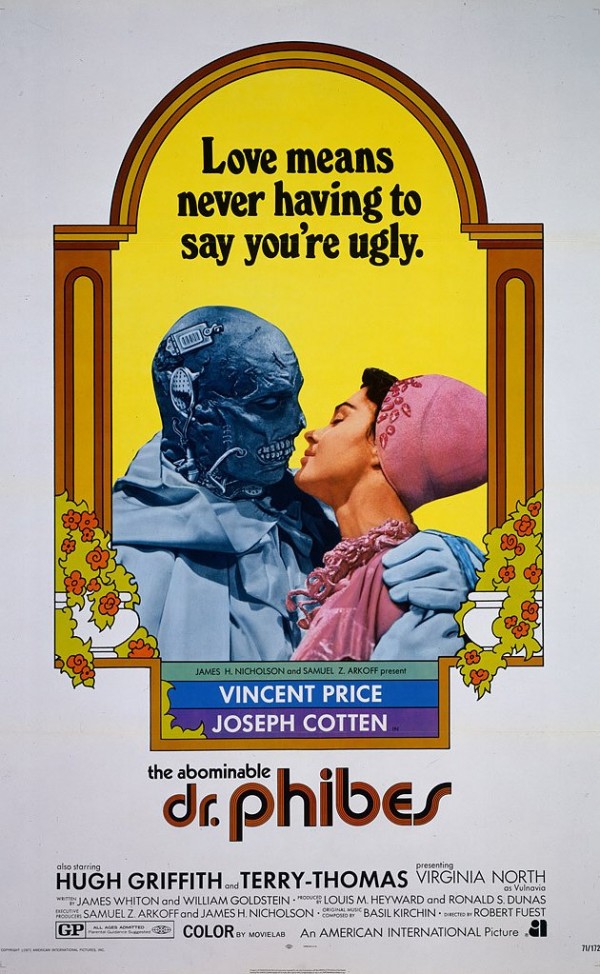 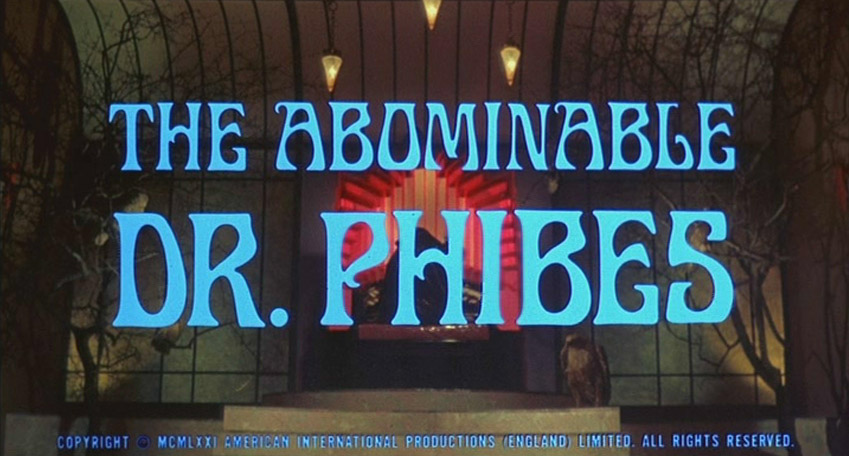 As you’ve probably noticed by now, I’m rolling with one movie review a month, plus scaling back on my comic book reviews as well. Everyday life is not permitting much else I’m afraid, but don’t fret, because the minute it does…alright, no promises, because I’ll probably just vacation more if/when that happens! But, for now we’ll be strolling down a dark lane that leads to a guy in a creepy mask that plays an organ. Yes once more, a Vincent Price film we’ll be featured! This is one of his later films (he’d already been acting in films since 1938!) but one of his best, no doubt about it!

This film is one that all Price fans must see if they already haven’t. It differs quite a bit from most of his other films because of the sets, the character’s demeanor, humor, and overall creepiness. Some of the scenes in this flick are quite disturbing, and the biblical references (the Ten Plagues), add a really crazy touch. Alright, no more hype, let’s get down to business!

The film begins with a robed man playing an organ (roll credits). It’s rising from a lower level to a sort of ballroom. We see what looks like an orchestra as well, but we soon realize they are just automated figures. The robed figure begins to play conductor, and the automatons play music. A side door then opens, and a beautiful woman, Vulnavia (Virginia North) wearing a white gown appears. The two embrace, and strut towards the center of the ballroom, an begin dancing. Eventually, the woman heads up to the second level balcony. The robed man grabs a wrapped object, and they get into a car, and hit the road. Meanwhile, across town, an older gentleman is bedding down for the evening. He shuts off his lamp, and attempts to slumber. Outside of his home, the car with the robed man and Vulnavia pulls up. As the man sleeps, a skylight over his bed opens, and a cage is lowered into the room. The cage empties, and is then raised back through the skylight and it is shut. After hearing some rustling noises, the man awakens to find his bedroom infested with bats. And they must be starving because they attack and kill the old man (presumed now, but told shortly after). 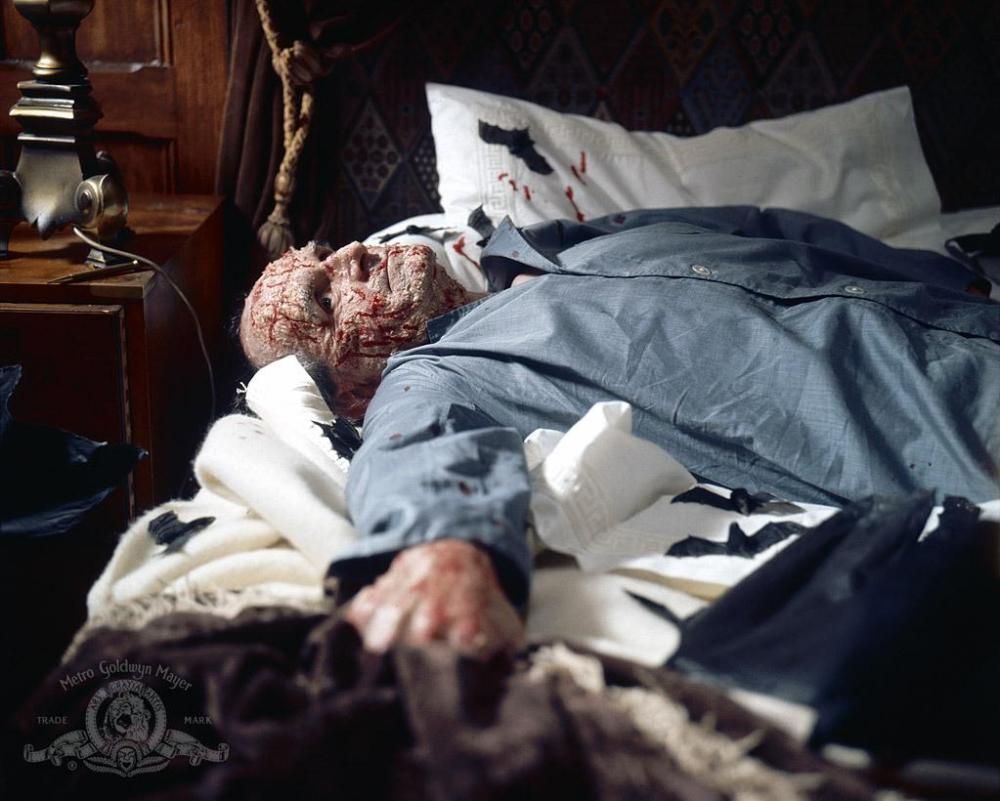 The car returns home, and the robed man returns to his organ playing. The following day, a butler discovers the old man dead, and the room covered in bats. Back at the robed guy’s house, he puts a necklace on a wax figure of the dead old guy, then melts it with fire. The police finally arrive at the home of the dead man, and they remark about the peculiar nature of the incident. Inspector Harry Trout (Peter Jeffrey) and Sgt. Tom Schenley (Norman Jones) conduct an investigation, and talk of another recent case where another doctor (apparently the dead guy as a surgeon), was killed in his library by a swarm of bees. 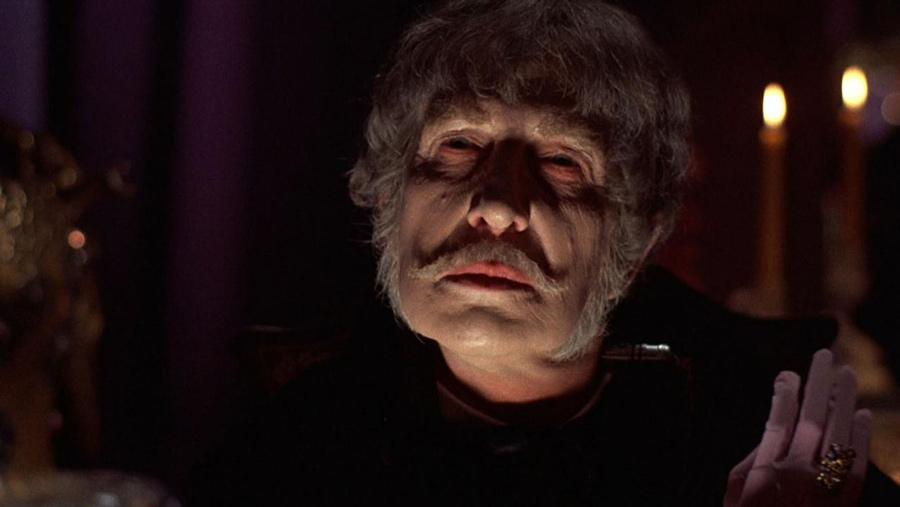 Back at the creepy house, we see the robed guy at a table where he has pieces of a face made of rubber or some such material. He picks up a nose, then two ears, then grabs a wig. We then get to finally see Dr. Anton Phibes (Vincent Price), in all his glory (although it was believed he died in a car accident years earlier)! He goes back over to his organ, and begins to belt out a tune. Later, a cocktail party is buzzing with life. This isn’t a regular party though, as all the participants are wearing ornate masks. One man, Dr. Hargreaves (Alex Scott)  enters and is given a frog mask. He remarks at how he’s not a surgical doctor, but a psychiatrist…a “head shrinker,” if you will. We can now realize that the man giving him the mask is Phibes, and he gives a glaring look when the doctor makes the remark. He helps strap on the mask, and locks it. As Phibes watches, the mask begins to tighten,  and eventually crushes the skull of Dr. Hargreaves.Blood begins to pour out of the mask. Once again, Phibes puts a chain around the neck of a wax figure resembling the victim, then melts it with a torch.

But, why is this disfigured man murdering doctors? And what does his dead wife have to do with these murders? All will be revealed when the time comes!

This film is nothing short of extraordinary. The sets are remarkable and allow ones mind to float off into a head trip of sorts. Bright colors, followed by darks, then throw in some lighting and wild music, and you’ve got something very unique. Of course, Price adds his immense talent to the film, and portrays this murderous figure as a sympathetic character that you end up feeling sorry for in the end.

Whether it was the sets, makeup, costumes, cast, or anything else, you can’t go wrong with this flick. It’s definitely one of Price’s masterpieces, and AIP (American International Pictures) should be commended as well for the films excellence. A seminal piece for sure, the film is one of the best of Price’s career and of the decade.