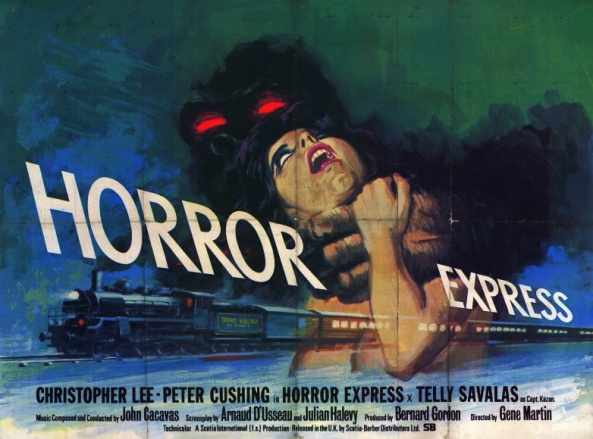 Although the memory of the first time I watched this film is alluding me, one thing is for sure, it’s one of my favorite films starring Cushing and Lee. It definitely has a Hammer, or Amicus vibe to it, but isn’t a production of either studio. There’s so much to say about this Spanish horror flick, I’m just going to get right down to it! 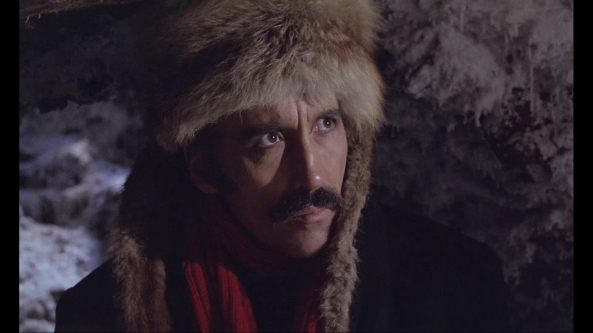 The film opens with Sir Alexander Saxton (Christopher Lee), as he and a search party are looking for fossils in Manchuria (image above). The trip is a complete success because they find something that looks half man/half ape, frozen in a block of ice. The scene quickly switches to the train station where the Trans-Siberian Express is about to head out from Shanghai. As Saxton is arguing with the man in charge at the train station, another man, Doctor Wells (Peter Cushing), and his assistant walk into the room. Wells then bribes the station manager to get two compartments, and storage space for his specimens. This infuriates Saxton, who then knocks everything off of the manager’s desk. Just as he’s about to get thrown out, a military man and a squad of soldiers show up, and offer their services to help, as they were commanded by their superior officer. Outside the office, a thief attempts to steal the ape creature from the crate, but winds up dead a few moments later. 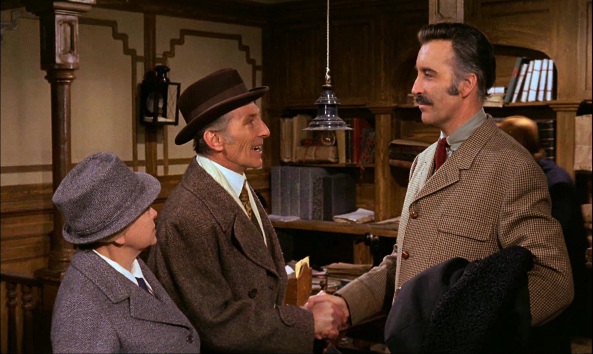 As Saxton returns to the crate outside, he sees a priest, Father Pujardov, as he’s trying to open the crate. A policeman, Inspector Mirov (Julio Peña),  investigates the attempted robbery, and asks Saxton what is in the crate. He tells him it’s only fossils, and the policeman seems skeptical. Meanwhile, the priest is trying to convince everyone involved that something evil is afoot, and the crate is inhabited by an evil presence.

Everyone boards the train, and in the baggage car, Saxton and Wells hear a moaning sound from inside the crate. Saxton denies hearing anything, and then a countess (Silvia Tortosa) enters the car. She checks  a bag that has something valuable, but then her dog is startled by the crate. Saxton assures her nothing is amiss, and they retreat to their cabins. Saxton ends up bunking up with Wells, and a strange woman has also made her way into the cabin, asking for Dr. Wells to help her get out of Shanghai. After a quick moment of awkwardness, we are also introduced to a scientist that’s aboard the train as well. In the private compartment of the Count (José Jaspe) and Countess, as they are joking about their mortal lives. Their religious companion, Pujardov (Alberto de Mendoza) gets angry at how flippant they are, but he gets put in his place by the Count. 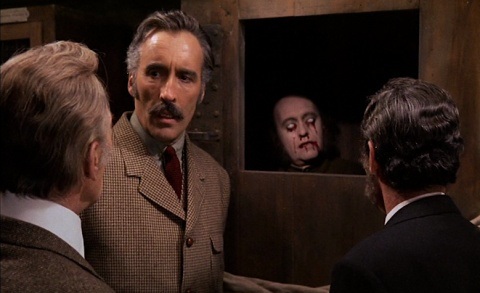 As the train speeds along, the baggage man is snooping around the crate that Saxton brought aboard. As he peeks inside, he’s hypnotized, then killed by the inhabitants of the crate. Soon after, Inspector Mirov discovers that the baggage man is missing, and orders Saxton to open the crate. He refuses even after he’s threatened with being pistol whipped. Inspector Mirov and his men use an axe to open the crate, and then find the dead baggage man inside the crate, but no frozen Yeti. Saxton is confined to his compartment, and then Inspector Mirov orders his men to search car by car until they find the Yeti. As two of the soldiers move in on the Yeti, it kills them both, and appears to exit the train. 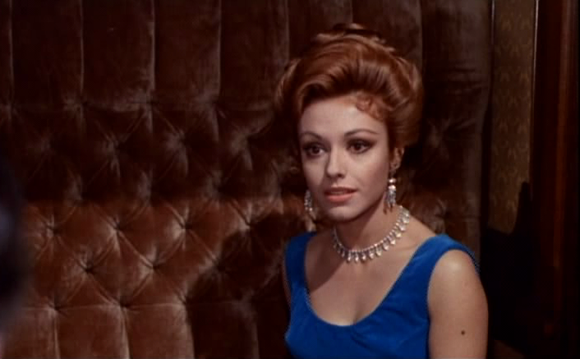 Next, Dr. Wells is having dinner with the strange woman who asked for his help earlier. The scientist that made an appearance earlier sits down and recognizes the girl, but she tells the man that he must be mistaken. Suddenly, Inspector Mirov interrupts the dinner, and asks Wells to help out with another killing. He and his assistant, Miss Jones (Alice Reinheart), saw open the head of the baggage man, and notice that the brain is completely smooth, and devoid of any knowledge. Wells explains to Mirov that something has erased the memories of this man. We then see that the Yeti has not left the train, but made its way to the baggage car. As Wells and his “partner”  are settling in for the night, she excuses herself, and heads for the baggage car. Little does she know, that the Yeti is there, waiting for its next victim! 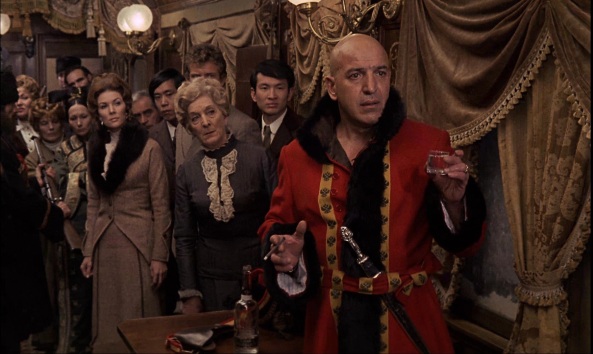 The yeti kills the female thief, but doesn’t make it out the door as Inspector Mirov seems to shoot and kill the beast. As the creature is dying, it hypnotized Mirov, and he passes out. As the train speeds on, we now notice that Inspector Mirov is hiding something. The engineer has radioed ahead, and notified the next station that there has been a murder. They alert the Cossacks (image above) that are stationed there, and now we get to see the bizarre Captain Kazan (Telly Savalas). He begins to search the train, and question the passengers. Tensions are running high, and the train begins to once again move towards its destination of doom! 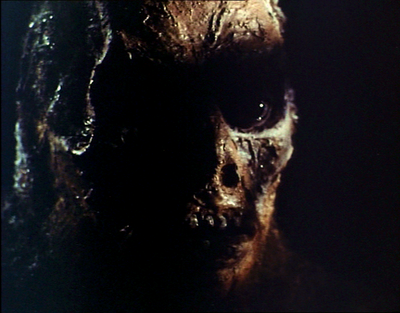 Listen, this film is incredible, especially when you consider it was made for $300,000. You did have a strong cast with Cushing, Lee, and Savalas, so that brought the picture up, no doubt about it. Cushing almost didn’t do the film, because he was still grief-stricken over the loss of his wife. Lee convinced him to stay, and it was a good thing that he did, because the two played off of each other wonderfully. As if those two icons weren’t enough, we get to see Kojak himself, Telly Savalas, too! He plays the wild Cossack Captain that really brings a turbulent mood to the movie.

The sets were rather cheap, but with that budget, they did an admirable job. Its been reported that they only used one train car for every scene, readjusting it to accommodate each different need. That’s quite a feat, if you ponder it for a while. The music score was quite good as well, and we have John Cacavas to thank for that addition. There were some gruesome scenes that really were cool, especially for 1972. Cushing sawed a guy’s head open, the effect the creature had on its victims was pretty cool too (bleeding from the eyes, nose, and mouth).

The film has a few twists and turns, so don’t just write it off as something that it is not. Cossacks, a Yeti, zombies, you name it, this film has it all! Do yourself a favor, get out and grab this flick, because it certainly is one that should be in your collection. Severin is distributing it now, and it can be found on their site, Amazon, Ebay, and all the normal DVD haunts. 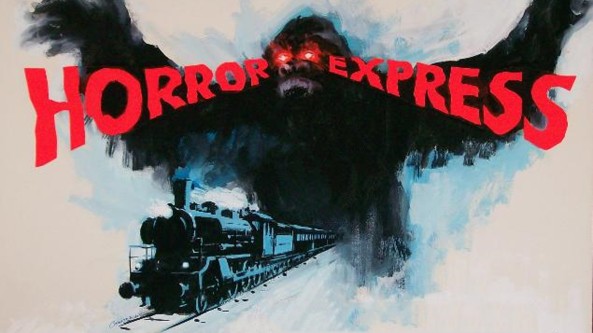