Title: The Trollenberg Terror (A. K. A. The Crawling Eye)

I’ve heard of this film, and was fascinated by the premise, but never saw it until recently. Once I’d heard it was an inspiration for John Carpenter’s “The Fog,” I knew I had to see it ASAP! Being a huge fan of that film (and a few other of his films), it was only a matter of time until this flick would be the subject of my weekly movie review! I’ll admit I only know one actor in this one (Forrest Tucker), but he’s enough to be another reason to watch the movie. OK, no more talk, let’s get to the meat and potatoes!

The film begins with three students rock climbing in the Swiss mountains. One has climbed a bit higher than the others, and they shout to him, asking what’s going on. He tells them it’s very foggy, and he can see someone coming through the fog. The two men on the lower ledge hear him scream, and then his body falls passing by them. He’s hooked on to a rope and they try to pull him up. The one man gets a look at him before the other man does, and he screams in terror, and let’s go of the rope. The other man shouts at him for letting go, but he tells him that his head was missing! Cut to the opening credits… 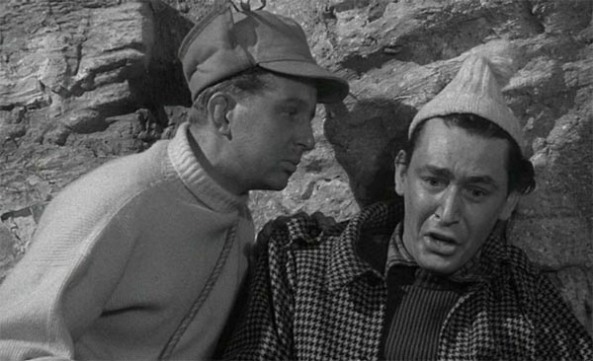 In the following scene, we watch as two women are on a train, one of them is sleeping. Anne Pilgrim (Janet Munro – image below, left),and her sister, Sarah (Jennifer Jayne – image below, right) There is a man sitting across from them, Alan Brooks (Forrest Tucker), reading a newspaper, and he notices that these two are a bit odd. Anne wakes up, and Sarah tells her that they’re passing the mountains. As she moves toward the window, she faints, and falls right into the lap of Brooks. When she awakens, she tells her sister that even though their trip isn’t over yet, that they must get off of the train at the next stop, Trollenberg. Brooks is really stupefied, but keeps to himself.

As the train stops at Trollenberg, Brooks gets off and meets another man, Klein (Frederick Schiller), owns a hotel of sorts, and Brooks invites them to stay there with the blessing of Klein. The two sisters are psychic, and have a routine they perform across Europe, and Anne uses her ability to pick the minds of the locals to find out why the townspeople are leaving. She questions Klein about this, but he’s evasive. Brooks looks on with  desperation in his eyes. They take a car ride to the hotel, where another man, Philip Truscott (Laurence Payne), is waiting there and seems to recognize the girls, but they hurry to their room to avoid a confrontation. 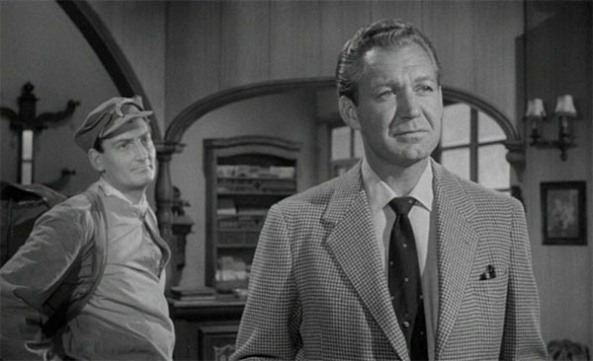 That night, Brooks (Forrest Tucker – image above, right) is in his room unpacking when Truscott comes in and attempts to be friendly, but as soon as he leaves the room, he telephones someone, inquiring about Brooks. Brooks happens to be walking down the hallway, and hears the conversation. As he heads downstairs, he meets two climber, Brett (Andrew Faulds – image above, left), and Dewhurst (Stuart Saunders). They’re heading up the mountain for a climb, and going to stay the night in a shack on the side of the mountain tonight, then head up tomorrow. Truscott, Brooks, and Sarah, all join them for a farewell drink. They all have one, but then the conversation turns to the recent “accidents” on the mountain, and things get a bit grim. The bartender, Hans, is reluctant to talk about these matters, and about the villagers sentiments about the subject.

As the two men head out for their excursion, Brooks decides to hitch a ride with them up the cable car. He climbs aboard, and heads to the observatory, where we see Professor Crevett (Warren Mitchell). He tells Brooks that the goings-on around here are eerily similar to that of events that took place three years ago in the Andes Mountains. Crevett explains to Brooks that everywhere that the ominous cloud goes, death follows, as well as high amounts of radiation. Meanwhile, back at the hotel, Anne and Sarah do their best Jedi mind trick routine (image above) to the applause of the guests. During this though, Anne begins to fall into a trance. She sees the two climbers in the hut (Dewhurst & Brett), and warns of danger. Crevett and Brooks realize that the girl must be psychic, and she is somehow able to see into the mind(s) of whatever is in the  mysterious cloud surrounding the mountains. Brooks calls the hut, and Dewhurst confirms that Brett is missing. Later, the observatory calls the hotel and tells the Professor that the cloud is no moving towards the hut. Within minutes, they call Dewhurst, and he tells them that he thinks he sees someone in the fog. Within seconds, Dewhurst is dead. 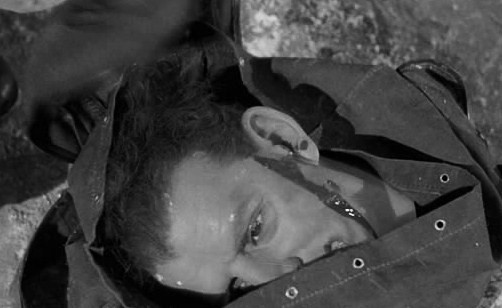 The following morning, Brooks and some of the others head out to find Dewhurst and Brett. After searching for hours, one of the villagers finds some bloody clothes, and then calls out to another villager. Before he can get his bearings, we see Brett, looking like one of Romero’s living dead, and he brutally kills the man. As the other villager arrives, he tries to defend himself, but Brett overpowers him, and slays him as well. Brooks, Truscott, and their party find the hut, and it’s very cold inside. The blankets are frozen, and so on. They find Dewhurst, and he’s been decapitated. They call to the city, and get an airplane to search from above as well. The next night, Brett inexplicably shows up, and seems a bit off kilter. As he’s sitting at the bar, Anne walks in, and he attempts to kill her, but Brooks knocks him out. They lock him up, but he escapes, and then decapitates the hotel owner. Brett then attacks Anne but Brooks shoots and kills him. Brooks and Crevett inspect the body and discover that any kind of heat can make his body disintegrate.

As the cloud moves toward the village, the people make their way to the observatory for a final showdown with the creatures in the fog! Will they survive or will they meet their doom!

When I heard that this film inspired John Carpenter, it immediately jumped to the top of my watch list. Having Forrest Tucker as the lead actor doesn’t hurt either. I loved his performance in The Abominable Snowman of the Himalayas (1957), and that film will be reviewed sooner than later as well. He’s really in charge in this film, and totally runs the show from the minute he’s on-screen. The supporting cast is also right there to add some flavor. Warren Mitchell portrays the Professor, and he fits the part perfectly.

The special effects were good for their time, and the “monsters” were pretty scary looking in this film. The man behind them was Les Bowie (uncredited), and he should be lauded for his efforts. The music score (Stanley Black) was very riveting at a few points, and will have you on the edge of your seat. The sets were fairly generic, but most of the time they didn’t need to be more than that anyway. The observatory scenes were the best, and seemed the most “real.” Get out and find this movie, it’s certainly worth the time!