In this, week two of #warcomicsmonth we have another delightful addition to the siege from the pages of Weird War Tales! From the incredible splash page of this comic, you get a real feeling of dread. The Sargasso Sea reference immediately makes me think of Johnny Quest, and that awesome episode that took place in that very location. As Death himself explains how there are seas that make that one seem insignificant, he also  explains how he’ll show the readers just what a horrible death is all about!

In “Blood Boat” we see a PT boat, as it spots a man drifting helplessly in the ocean. They pick him up, and he explains how he was on a ship that was sunk by a Japanese sub days earlier.  How he alone survived is a bit of a mystery, though. We next see how the Captain has been under tremendous stress, and he’s also really at odds with his job versus his morals. He slips off to sleep, and has a terrible nightmare about Van Derling (the guy they picked up in the ocean). He then awakens to find the ship a mess, and many of his men dead with the traditional vampire bite marks on their throat! Written by J.M. Dematteis, art by Dick Ayers and Dan Adkins, colors by Jerry Serpe, and letters by Jean Simek.

A quick one-pager called “Death’s Double Agent” comes next. The story revolves around a man who escapes German captivity. The senior officer tells his subordinates that it’s all in the plan, though, as he’s been brainwashed to be a double agent! Written by Mike Barr, art by Jerry Bingham and Romeo Tanghal, and colors by Jerry Serpe.

Finally we have “The Lonely Road to Life.” In this tale, we see war training in space! A young hot dog pilot almost causes an accident, but he couldn’t care less as long as it gets him noticed by his superiors. In the end, he winds up alone and with something truly horrifying looming over him! Written by Jack Oleck, art by Alex Niño, colors by Jerry Serpe, and letters by Erick Santos.

The cover is by perennial creepy cover artist, Luis Dominguez! There are also some absolutely classic ads in this one as well! 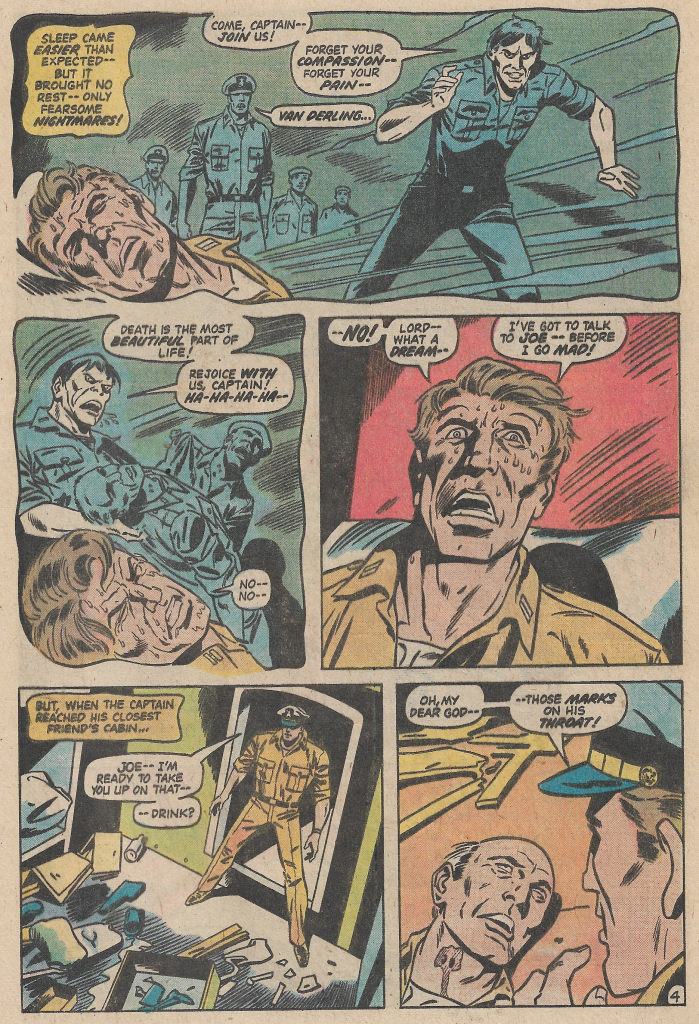 Leave a Reply to Ben Herman: In My Not So Humble Opinion Cancel reply