Of course, everyone that’s a fan of the sci-fi/horror genre has heard of the 1958 classic, The Blob. I’d like to spotlight a film that has quite a few similarities…and was released two years previously. Not trying to imply that The Blob is a ripoff but they certainly seemed to “borrow’ a few ideas from this film. A film that was originally intended to be a sequel to Hammer’s successful sci-fi film, The Quatermass Experiment, but the writer of that film (Nigel Kneale) wouldn’t allow the use of his main character (Professor Bernard Quatermass) to be used, so they reconstructed slightly, and moved forward.

Limited budgets have never stopped Hammer Studios from producing great material, and this film is no exception. The cast isn’t very recognizable to fans of Hammer’s horror films (except for Michael Ripper!), but don’t let that dissuade you from watching. Alright, let the storytelling commence! 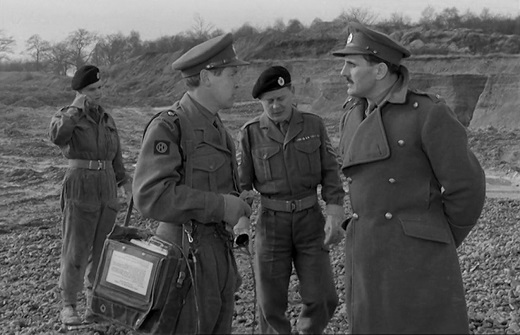 The film opens with a soldier, Corporal “Spider” Webb (Anthony Newley), as he’s using a Geiger counter to search an area for radioactivity. He gets a reading, and then finds something buried just below the surface. We then see that it’s a training exercise, and the soldiers are prepping for a mission. We see Sergeant Grimsdyke (Michael Ripper) and he’s told to retrieve Major Cartwright (John Harvey) because one of the soldiers is getting a reading nowhere near one of the test areas. They then try to find the device they planted for the exercise, but the muddy ground begins to bubble near the other site, and one of the soldiers gets frightened. Grimsdyke orders the men to back off, but before they can get away, two of the men are caught in an explosion. We see a “Y”-shaped crack in the Earth, and smoke pouring out of it.

Over at a lab, we see Peter Elliott (William Lucas), and Dr. Adam Royston (Dean Jagger), conducting experiments. Royston seems like a bit of an eccentric old chap, and has an affection for oddities of all kinds. Royston then gets orders to go check out the radioactive area that the Army discovered. The area doesn’t seem to be radioactive anymore, so Royston is skeptical. He then gets a look at the soldiers that were burned in the incident, and changes his mind. He immediately requests for his equipment to be brought out to the site. There are some reporters there and they start to badger the military.

Later that night, two kids are up to some shenanigans, and one ventures out to the restricted area by the fissure. He nears a structure, but then stops when he hears a noise. He’s stopped in his tracks by something horrific that is sizzling like bacon. He runs so fast that he passes out his mate that waiting for him. We next see the boy in the hospital (he eventually dies from the encounter), and Dr. Royston has been brought in to examine him. It seems the boy has radiation burns. Royston questions the other boy about their whereabouts the night before, and he confesses that they went near the restricted area.

Royston heads to the Tower near the restricted area to do some investigating. He finds a old man making moonshine, and then also a metal canister from his lab. He rushes back to his lab, and sees that it has been broken into by some unknown person(s). The lab is ransacked, and there’s a strange film over everything. Peter arrives and is shocked at what has happened. Inspector “Mac” McGill (Leo McKern) is sent by the local authorities to investigate the strange goings-on. That very night, a doctor and a nurse are “fraternizing” but get interrupted by the same unforeseen force that burned the boy. It chars the man to ashes.

Out on the marshes, two soldiers are attacked by the radioactive force, and killed. Royston concludes that there must be a sort of radioactive prehistoric creature that is causing this havoc, and that it must be stopped or many more will die a horrible death! They hatch a plan to repel down into the fissure, and see what exactly they are up against. Elliott volunteers to be lowered down, and as he’s being lowered down, he sees the remains of one of the soldiers that was killed. The creature then moves in to attack, and the army tries to fight it off with guns and flamethrowers. They next attempt to seal the creature below by filling the fissure with concrete. Royston tells them that it wont work, because it already made its way to the surface through tons of rock.

Will Dr. Royston be able to concoct a plan to stop this radioactive nightmare or will the entire countryside be burnt to a crisp?!? Tune in to find out!

Although this film is very good, it does lack star power. The other films (in the Quatermass trilogy) have a very strong lead, and that certainly helped them stay a bit more on point. Dean Jagger isn’t bad or anything like that he just lacks any real “oomph” on-screen. The erst of the players are good but not great, so there’s really no support to help push the cast ahead. There is some great atmosphere and thrilling moments in this film, and they give it a feeling of comfort while watching.

The soundtrack is average, and the sets just above that bar. A few moments of humor are well placed, and throw a good curveball into the mix. There is one glaring omission from this film that you typically find in all of their films- an attractive but competent female role. It would’ve’ benefited the film immensely, and added a nice and missing angle from the film.

Overall a good sci-fi flick that helps set the tone for the other Quatermass films that follow down the road. Definitely set aside some time for a viewing!