On this Veterans Day, I thought it fitting for #WarComicsMonth I’d spotlight Marvel Comic’s greatest military man, Sgt. Fury! Yes, kids, before he was a super spy, and head of S.H.I.E.L.D., he was a bad man serving in the United States military! Now he’s portrayed as more of a thinker that’s reserved and doesn’t soil his hands in physical combat, but back in WWII, he could kick butt like no other (well, except maybe Captain America of course).

In this over-sized issue, we get two stories to sink our teeth into! The first, “Armageddon (from Sgt. Fury 29, 1966),” shows our man Fury, and his seemingly never-ending battle with his arch nemesis Baron Strucker! These two men have been all but equals over the years (with Fury almost always getting the upper hand of course), and the disdain for each other is at full capacity! Written by Roy Thomas, with art by Dick Ayers (pencils), and John Tartaglione (inks). Then, Sgt. Fury and his Howling Commandos must face “The Incident in Italy!” This one must’ve been a fan favorite, as it’s been reprinted at least twice (originally published in Sgt. Fury 30, 1966)! The same creative team brought that one to life as the previous issue (and the cover to this issue as well!). Both tales were edited by Stan Lee and lettered by Sam Rosen! 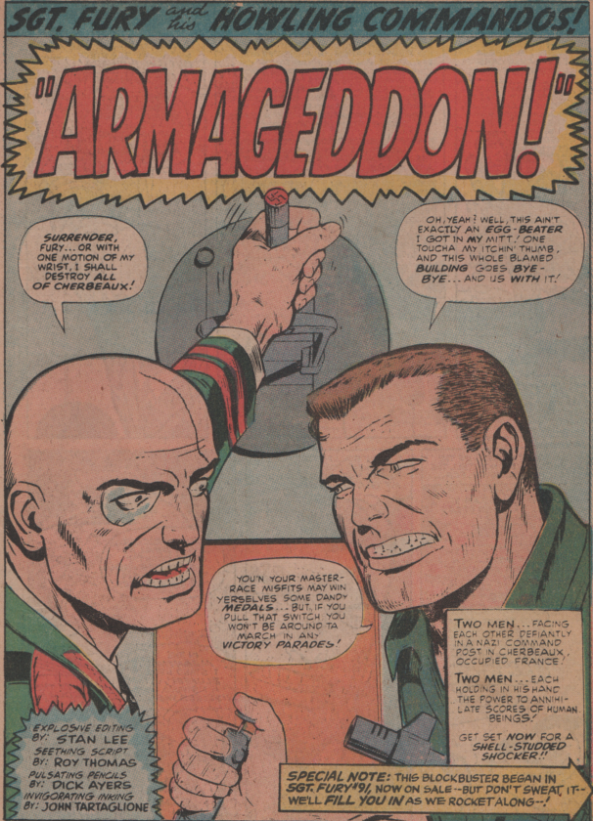